*I originally wrote this article for AntiqueWeek a couple of years ago. In the intervening time, Phil Collins has donated his collection to the Alamo. 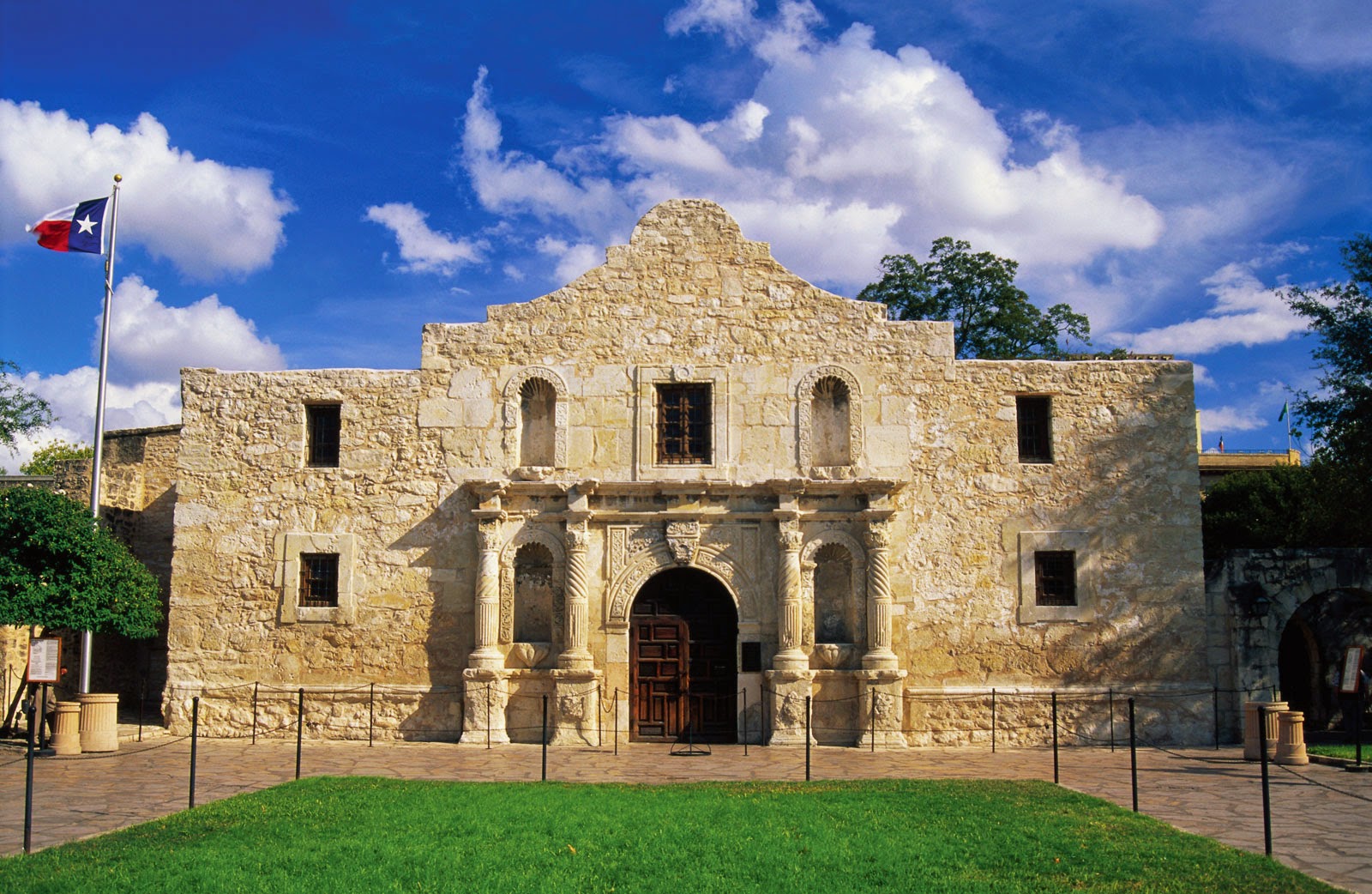 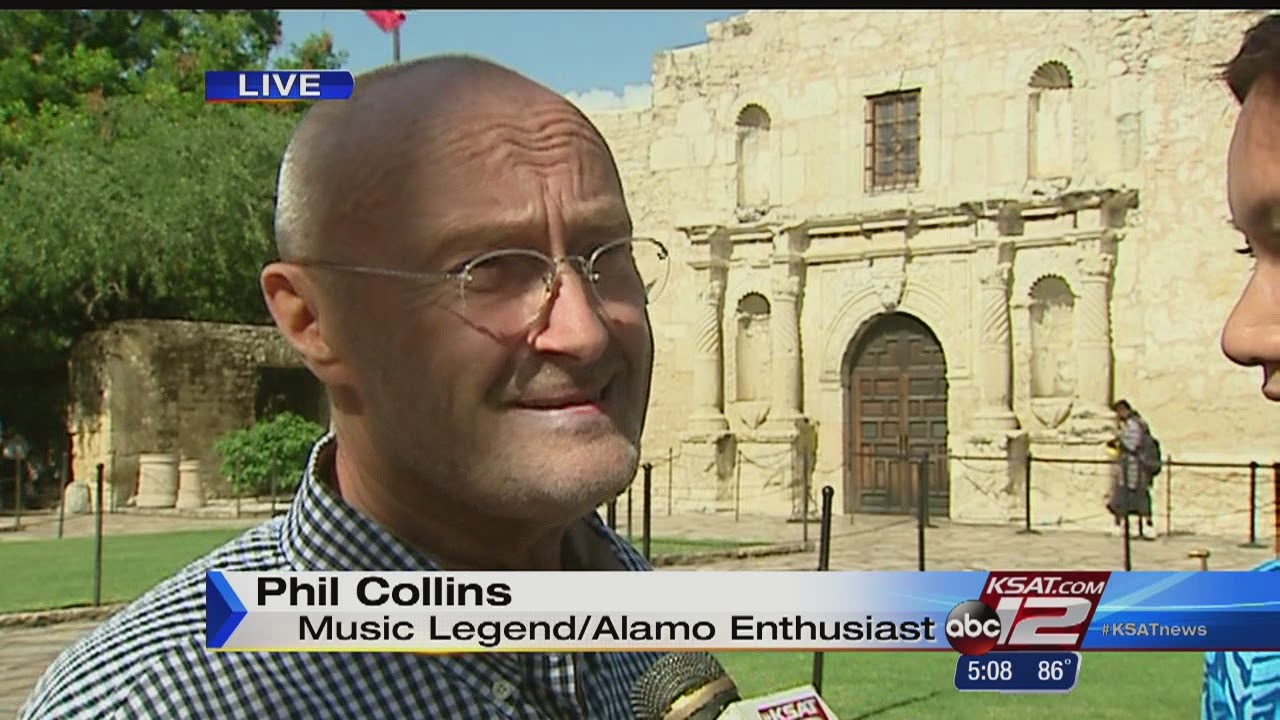 Phil Collins and the Alamo

In Feb. and March of 1836, a legendary battle between the Republic of Mexico and rebel Texan forces took place at the Alamo mission in San Antonio, Texas (which was then called San Antonio de Béxar). Texans were fighting for their independence from Mexico, which was ruled by the increasingly dictatorial Mexican President Santa Anna, who had abolished the Constitution of 1824 and proclaimed a new constitution that increased the power of the Presidency and reduced the power of provincial governments.

The Texans lost the Battle of the Alamo, in which 200-260 or so rebels held the fort for 13 days against approximately 2,000 to 2,200 Mexican soldiers. The courage of conviction shown by the freedom fighters, most of whom died during the predawn assault by Santa Anna’s troops on March 6, and the deaths of such legendary martyrs as James Bowie, David Crockett, and William Barrett Travis, have elevated the battle and the Alamo itself to iconic status the world over.
In addition to providing sheer inspiration--"Remember the Alamo!"--the 13-day holdout, which was a key turning point of the Texas Revolution, halted the progress of the Mexican forces and gave General Sam Houston a chance to gather supplies and troops for his victory at the Battle of San Jacinto on April 21. Today, the Alamo, which was originally named Mission San Antonio de Valero, is the most visited tourist site in Texas, attracting more than 2.5 million visitors per year.

One of the more famously frequent visitors is Phil Collins, who was a drummer and singer in the storied English rock band Genesis, which he joined in 1970 and left in 1996. Collins also carved out a successful career as a solo artist, and he still performs today. Before we explore the whys and wherefores of the relationship between Phil Collins and the Alamo, a little history on the unlikely rock star is in order. I use the term “unlikely” because of his everyman looks, bald pate, and humble disposition.

When the eccentric Peter Gabriel left Genesis in 1975, and after an extensive search by the band for an outside replacement, Collins became the lead singer, which helped give the group a more radio-friendly sound. The result was a string of super popular albums, including Duke (1980), Abacab (1981), Genesis (1983), and Invisible Touch (1986), the latter of which contained the only Genesis song (the title track) to reach number one on the American Billboard singles chart.

In 1996, Collins left Genesis, which gave him more time for his award-winning solo career, which includes three Oscar nominations, eight Grammys, and two Golden Globes. Collins’ more popular tunes, such as "Sussudio," "One More Night," and "You Can't Hurry Love," are staples of light rock radio, and his Disney hit, "You'll Be in My Heart,” (from 1999’s Tarzan), won the Golden Globe Award for “Best Original Song” and the Academy Award for “Best Original Song.” Along with Michael Jackson and Paul McCartney, Phil Collins is the only recording artist to have sold 100 million records with a band and as a solo performer.

Clearly, Collins is a mega-successful rock legend worth untold millions. But what does all of his fame, fortune, and musical acclaim have to do with the Alamo? Plenty. Collins’ considerable wealth gives him the means to own what is believed to be the world’s largest private collection of artifacts and mementoes from the Battle of the Alamo (and, by extension, the Texas Revolution).

This still doesn’t explain why Collins, an Englishman who lives in Switzerland (where his collection also resides), would want to spend a fairly substantial chunk of his fortune on Alamo memorabilia.

In a promotional video for the hardcover coffee table book, The Alamo and Beyond: A Collector's Journey (2012, State House Press), which Collins wrote, the British rock star and author explains the beginnings of his fascination with the historic battle site, which has captivated his imagination since he was a young boy.
“I have vivid memories in our living room watching Walt Disney’s Davy Crockett, King of the Wild Frontier [1955],” Collin says. “And, of course, John Wayne, in 1960—that film [The Alamo] just blew me away. I saw the movie as much as I could.”
While Collins’ Alamo addiction dates back to his youth, he didn’t catch on to the idea of collecting Alamo artifacts until much later.

“It was the Genesis tour of ’86, which was just after No Jacket Required,” Collins says. “That would be the Invisible Touch tour. I was in Washington D.C. In Georgetown, actually. There was this chain of stores called The Gallery of History. [It had] Napoleon Bonaparte’s signature, Mussolini’s signature, Hitler’s signature. Then I saw one of Davy Crockett. A letter. It never occurred to me that this stuff was out there, that you could own it.”

Collins didn’t buy the Crockett autograph, but its discovery did plant the seed for things to come. In 1994, his third wife, Orianne Cevey, gave him a gift that would help change him from a mere Alamo admirer into a hardcore collector: a sales receipt for a saddle signed by an Alamo defender. More Alamo gifts followed, and in 2004, during Collin’s second visit to the historic battle site, he formed a friendship with Jim Guimarin, proprietor of The History Shop, which is a retail store near the Alamo.

Over the next couple of years, Guimarin helped Collins build his extensive Alamo collection through orthodox methods (correspondence with fellow collectors, etc.). However, in mid-2007, the pair went underground. No, Collins and Guimarin didn’t do anything illegal, but they did sponsor and take physical part in excavating the ground beneath The History Shop, digging through its flooring to the depths below, uncovering such relics as horseshoes, buttons, buckles, teeth (human and animal), musket balls, nails, and good luck charms. 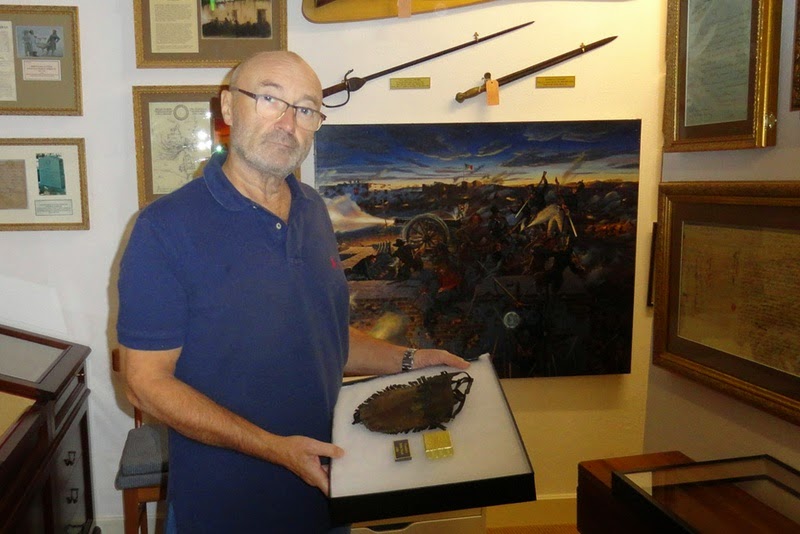 In addition to accumulating artifacts, Collins is a budding Alamo historian. In The Alamo and Beyond, Collins writes essays about each of the items in his collection. Here’s an example of said writing, found on pages 106-107:

This is a rare British-made light cavalry officer’s sword with an overall length of 39 inches and a blade length of 33 inches. It comes with a beautiful black leather scabbard and is in remarkable condition.

The grip is covered with sharkskin and wrapped with twisted gold wire. There is also a unique feature of the Mexican eagle on both sides of the blade. This marking only appeared after 1822 (thanks Sam Nesmith!) and was popular with military officers of the day.

Carried by cavalry officers throughout the Texas campaign, it is a rare example of a handsomely engraved weapon. The officers always tended to look tip-top, wearing their fine dress uniforms. They were also quite prone to dressing their horses to an impressive degree as well. Man and mount together would have looked most striking in large numbers.

If you believe the stereotype (and, oftentimes, the headline news), rock stars typically spend their discretionary income on drugs, booze, motorcycles, sports cars, mansions, wild women and other such monuments to the hedonistic (not to mention narcissistic) lifestyle. Phil Collins’ Alamo obsession is a nice change of pace from that tired old rock and roll story.