Breakout for the PlayStation - Review 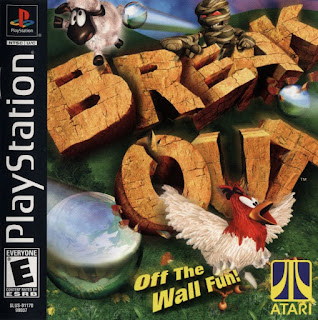 An updated remake of the 1976  classic of the same name,  for the  dispenses with the simplistic lines and dots of the original game and adds power-ups, 3D interactive worlds, unlockable levels, and, of course, a storyline. Only the basic objective remains the same: maneuvering a paddle to keep a ball in play so it can ricochet off a wall of bricks (or other items in this case), effectively eliminating the bricks from the playfield. 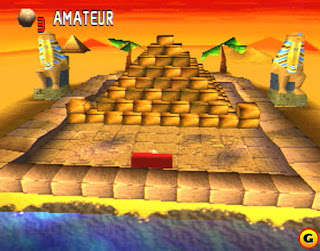 The  world of 2000 is an island filled with bizarre creatures in the form of paddles and balls. Bouncer enjoys his life their with Daisy, his beautiful girlfriend. All was fine in paradise until one day when Bouncer took a swim out to sea to rescue a ball. While Bouncer was gone, the evil Batnix and his henchmen kidnapped Daisy.

When Bouncer returned, he was imprisoned in a dark and dank jail cell. To prevent Bouncer's friends from busting him out of prison, Batnix put them in jails all across the world. Bouncer attempted to escape on his own, but he was caught and affixed to a ball and chain. Luckily, the ball was friendly and let Bouncer smack him against the wall, shattering the bricks and mortar, freeing both ball and paddle from prison. Now, Bouncer must rescue all his friends.

The paddle you control in  can be angled or curved so that you can aim the ball more precisely and hit objects that aren't directly in front of you. As you progress through the game, you can add paddle friends (each with a unique skill) to your arsenal and call on them at any time to take Bouncer's place. Also, there are many power-ups to collect, such as Extra Life, Big Paddle, and Grab Ball, which lets you catch the ball and reposition it prior to shooting it at an object. 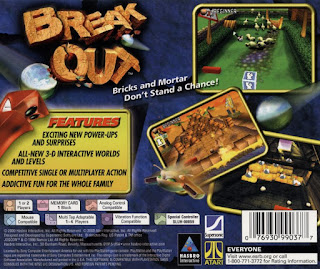 Most of the levels in Breakout require you to hit the ball in order to knock down and demolish obstructions. However, some of the levels are less simplistic, requiring you to perform such tasks as knock down targets in a specific order. In a few of the levels, Bouncer must get up on two feet and do things most paddles have never dreamed of (you'll have to play the game to find out what).

After you complete a level, you will be ranked according to performance. The higher your ranking, the harder the challenge. To improve your ranking, you can repeat earlier levels.

If you don't want to game alone, Breakout lets you compete with up to three friends via split screen action. There are two ways to play in this manner: you can attempt to clear your playfield as quickly as possible, or you can hit colored targets in your arena in order to place additional bricks and other objects in your opponent's arena. Four multi-player levels are available: Egypt, Castle, Space, and Farm.

Arcade and -style video games of the 1970s and early 1980s were, for the most part, games of skill that were easy to learn, yet challenging to master. Most games had just one to four different screens. To excel at a game, good hand-eye coordination and finely honed concentration skills were a must. This was certainly true with the original Breakout, a fun game with a user-friendly rotary controller, few rules, and increasingly intense gameplay.

With the advent of  in 1985, the so-called "twitch" games of old were suddenly outdated. Mainstream gamers began demanding storylines, power-ups, puzzles, hidden items, expansive worlds, and multiple levels. As a result, games became longer and more complex, but lost ground in areas of intensity and focus. Working with so many screens, it was simply harder for programmers to provide an engaging experience every step of the way. Video games were still fun, just in a different way.

Retro gaming was in full swing in 2000 thanks in part to the folks at  Interactive, a company becoming increasingly known for combining the skill-based sensibilities of old-school gaming with the multi-this, super-expansive-that of newer games. Their classic remakes line of games had its line of successes (Q*Bert) and failures (Centipede), and each new release was welcomed with excitement and curiosity, tempered by a healthy dose of trepidation.

This brings us to Breakout, yet another updated remake of an old-time favorite. So, how did Hasbro fare this time around? Well...not bad. Not great, but not bad. "Breakout 2000" succeeds in some areas and fails in others. It keeps some of the important concepts of the original game (such as rebounding a ball with a paddle) while adding some strange new twists.

Yes, strange is a good word for this enhanced version of the old ball-and-paddle, bricks-smashing classic. Strangest of all are the levels in which your paddle leaves its previously horizontal state and hoofs it on two feet. He runs from angry dogs, knocks ducks off a raft, shoots at robots, throws bricks at a dragon and more. These levels are original and mildly amusing, but they interrupt the flow of gameplay and seem totally out of place. 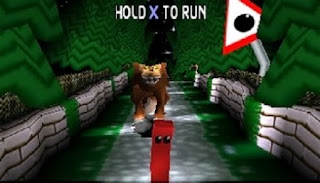 Also strange are some of the standard levels in which you rebound a ball off a wall or objects. The simple bricks of the original game have been replaced with soldiers, chickens, 3D bricks, and other items. Gameplay in these areas is mostly fun, but the levels are short and never reach the intensity of the original game.

Once you get to a certain point in the original Breakout, which benefited from the precision of a rotary controller (something lacking in the  version, of course), your eyes, hands, and mind have to be perfectly and constantly in sync in order for you to maneuver your paddle in front of the quickly moving ball. With this game, however, once you beat a level, you can relax a bit and take a breather as you ease into the next level.

The puzzle elements of this version of Breakout are interesting, challenging, and sometimes original. In some levels, instead of simply letting the ball hit your paddle, you must aim the ball at certain targets. If you hit the wrong target, it can spoil your progress. There is one especially clever section of the game in which you must carefully lower explosive fuel barrels by alternating hitting opposite sides of a conveyor belt. Another level has you on the outside of a rocket ship batting away meteors.

The storyline that plays out during intermission scenes between each level adds to the game by providing motivation for beating each area and by helping bring your paddle character to life. The little guy actually has a personality, as do the paddles you can unlock during the game.

After you think you have beaten , the game is still not over. After the credits roll, you'll be given a crack at playing a round of Breakout patterned closely after the original. This is a nice touch, but it doesn't go far enough. Beating all of the levels doesn't exactly unlock the original game as you only get to break down one wall of bricks, and then the game will end. After completing the game, you can break down this wall of bricks any time you want, but it is still just one wall of bricks. Contrast this with the PS remake of , in which you can find a replica of the original  game in its entirety.

A quirky remake with a few things to recommend and a few shortcomings,  for the PlayStation isn't perfect, but it is worth picking up, especially for retro enthusiasts.
Posted by Brett at 7:46 AM No comments:

Located in Richardson, which is near Dallas, Free Play Arcade is a new destination spot in North Texas. I recently had a chance to catch up with co-owner Corey Hyden, who was kind enough to take time out of his busy day to answer a few of my questions.

BRETT WEISS: What is your position with the arcade?

CORY HYDEN: I’m the President and, through a convoluted entity structure, one of the two owners of Free Play. The other owner is Richard Tregilgas.

WEISS: How much is admission to the Free Play Arcade, and what will that get you?

HYDEN: It's $10 + tax to get in and that lets you play all of our awesome games as much as you'd like until closing. All of the games, through one manner or another, are set to free play. 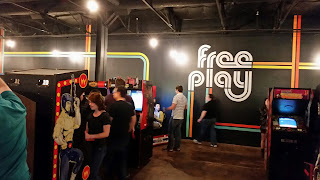 WEISS: You have more than 60  cabs, correct? Do they run the gamut from classic to current? What are some of the cooler machines? Do you have  as well?

HYDEN: We have about 65 stand up cabinets, 5 cocktails, and 5 pinballs on the floor right now. It's mostly Golden Age classics with a solid helping of the solid early ’90 games. Our target date is nothing newer than 1995, but we make the occasional exception for super cool games. We have a substantial amount of games, with around 100 warehoused as well. We anticipate rotating 5-10 games in every month. 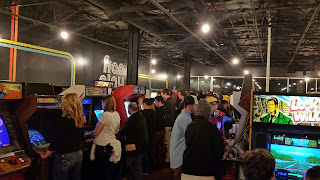 It's hard to really classify any of the games as "cooler" than the other because we have a pretty carefully curated collection designed to be awesomely entertaining but not overly hardcore. The arcade guys like our dedicated  and our Atari Star Wars. The retro enthusiasts love games like , , and Tapper. The nineties kids eat up Simpsons and Street Fighter II. The collection is simultaneously approachable yet full of extremely rare games, such as our GPi King & Balloon. Our pinball is Williams-heavy, but we have a Super Mario Bros. that the  guys hate but normal people love. 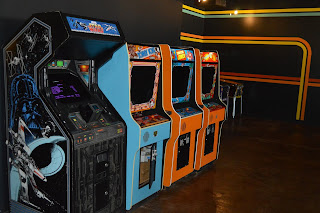 WEISS: When did you get the idea to open the arcade, and how did it come together?

HYDEN: A few years ago, on a whim, I bought an arcade cabinet and had a blast with it. Next thing I knew, I was taking it apart, buying more, fixing them, and amassing a collection that quickly outgrew the house. As I introduced my friends to the games, it became obvious to me that there was still a huge market for these classic games. Once I had a couple hundred games, it was time to figure out a way to get them to the masses in a sustainable, awesome format. I roped in my brother-in-law Richard Tregilgas, and we went from there! 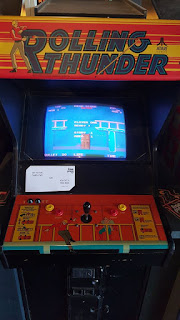 WEISS: What is your favorite classic arcade game and why? Do you have a modern favorite?

HYDEN: . Brutally difficult with a ridiculous theme. It's exactly what I want in an arcade game. Regarding modern, we have an Outrun 2 on the floor that is totally breaking our date/age rules because the game is so awesome.

WEISS: Did you grow up going to area arcades?

WEISS: What sets Free Play Arcade apart from other arcades in DFW?

HYDEN: Our game list and game condition. We have 70ish awesome retro arcades on the floor right now, with none out of order, not even a single switch. We have three in-house techs dedicated to the art of insuring that these games are in top running order using only original game boards, CRT monitors, and the like. We also have the best, most insane beer selection in the area and awesome, not-overly-unhealthy food.