Everything I Needed to Know, I Learned from the Nintendo NES - By Shane Stein 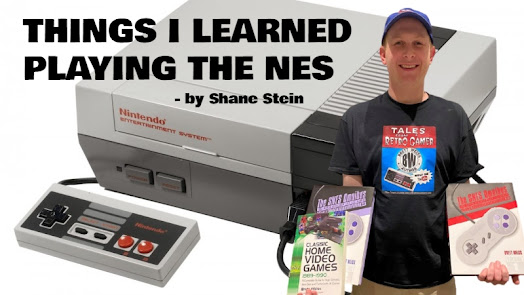 The NES OmnibusVol. 2 (M-Z) will be out in November, but I wanted to share this excellent supplemental essay from the book with everyone ahead of the shipping date. I hope you have as much fun reading it as I did! Enjoy!

Everything I Needed to Know, I Learned from the NES

Everything I needed to know, I learned from the NES. An exaggeration? Well, yes, of course. But surprisingly enough, and perhaps to the chagrin of 1980s parents everywhere, Nintendo games genuinely did teach us far more about the broader world than we probably ever realized. We just simply needed to pay attention.

Today, we take for granted that the world’s information is readily available at our fingertips. Prior to the internet, however, the average American kid had dramatically less access and exposure to most of the globe’s peoples, history, news, entertainment, and far more. Sure, we learned a decent amount in school, through parents and friends, and from books, movies, and magazines. But widespread accessible information on any given topic was virtually nil compared to the present. Need, for example, to research Japanese history for that term paper? These days, of course, we Google it. Back then—head to the library and spend hours finding that one book you need amongst a stack of thousands. Hope you know your Dewey Decimal system and hush your voice around the librarian.

Fascinatingly, though, significant knowledge of the world outside our immediate childhood surroundings could be gleaned from, of all sources, the Nintendo Entertainment System and its games. How can this be, you might ask? Obviously, it wasn’t remotely comparable to today’s internet. But the vast NES oeuvre, encompassing a substantial array of game genres and categories, truly provided a slice of worldly education.

Want to learn about a new sport, for instance? Growing up in Texas, I played endless amounts of baseball, basketball, football, and soccer. But never ice hockey—indeed, I never even learned to properly skate, much less chase a puck. Hockey was little more than an abstract notion to most of us raised south of the Mason-Dixon line. And yet, thanks to Ice Hockey on the NES, I learned the game’s rules so well I could even describe “icing” from the referee’s perspective. (I also learned that video hockey players came in three categories – big/slow, medium, and fast/skinny—but that’s a whole other story!)

How about golf and skateboarding, two other pastimes I rarely experienced in person? Golf on the NES taught me not only that Mario favors the links, but also the fundamentals of club selection and calculating windspeed’s effect on the ball. Skate or Die, meanwhile, imparted an entire skating culture’s milieu and lingo, from freestyle to downhill jams to ollies and rail slides. Eventually I did pick up golf as a teenager, and the NES experience most certainly assisted with my development. I never ultimately pursued skateboarding, but at least I was no longer clueless when it came up in conversation.

Okay, so those are just fun and games. How about more serious topics, like politics and history? For contemporary lessons on the Cold War, try Rush’n Attack and Golgo 13: Top Secret Episode. The thinly veiled title of the former was a genuine concern until the 1989 Berlin Wall collapse, and the player starred as a singular U.S. soldier, armed initially with only a knife, and yet aiming to infiltrate and bring down the Soviet superpower. (Echoes of Schwarzenegger and Stallone movies, anyone?) The latter game, meanwhile, whisked players all around the world in an espionage battle between the CIA, KGB, and other intelligence agencies. Exotic locales included Berlin, Athens, Rio de Janeiro, and even Antarctica. How many American kids learned in school about Berlin’s Tegel Airport, Potsdam Station, and Spree River, or about Athens’ Parthenon, Theater of Dionysius, and Herodes Concert Hall? Those of us who played Golgo 13 were in the know.

What about East Asian culture, you might ask, of which Americans regularly encounter today but back then hardly experienced? Years before ever hearing of sushi or watching Ichiro play baseball, I ascertained plenty from the games Kid Niki, Flying Dragon: The Secret Scroll, and The Legend of Kage. Broader America first learned of Jackie Chan upon his first U.S.-marketed film, 1996’s Rumble in the Bronx. But NES gamers had known his exploits for years thanks to Jackie Chan’s Action Kung Fu. Obviously, these brushes with East Asia were mere bucket drops compared to actually living there, but for many kids here in the States, the NES is truly the closest we got.

And how about reading comprehension, something the NES certainly was accused of pushing kids away from? Besides Nintendo Power, which millions of us consumed, try some of the games’ instruction booklets. The stories behind Dragon Warrior, Faxanadu, and Final Fantasy come across as thrilling as any young adult fantasy novel. Indeed, Nintendo even seemed to recognize this, licensing their name to the “Worlds of Power” novelization series for Metal Gear, Castlevania II: Simon’s Quest, Ninja Gaiden, and others.

Interested in robotics? Mega Man and its sequels may have been light years ahead of reality, but the titular robot hero and his exploits surely inspired plenty of budding scientists. And how many kids, fascinated by the stealth military strategy of Metal Gear, Jackal, Commando, and others, perhaps received their initial inspiration to join the U.S. Armed Forces and defend America? (If you think this is a reach, look no further than Star Trek, which inspired countless young people to pursue careers in science, engineering, and astronautics.)

Even games without ostensibly thematic connections to certain topics could still impart their wisdom. The Legend of Zelda is by no means about animals per se, but I first heard of sea urchins thanks to its enemy character Digdogger. Nor did I realize a boxing match could end without a knockdown, until encountering the Win by TKO in Mike Tyson's Punch-Out!! And who could have imagined learning about celebrities—Iggy Pop, Morton Downey Jr., Lemmy from Motorhead, and Beethoven amongst them—through Super Mario Bros. 3’s Koopaling characters? (Seeing SMB 3’s Beethoven knock-off was almost as cool as watching him rock out in the movie Bill & Ted’s Excellent Adventure!)

And the list goes on. We’re really just scratching the surface of what the NES exposed us to, and it’s almost impossible not to learn something new simply by firing up the controller. With such an expansive variety of games, both American-made and globally-produced, in-house as well as third-party, from individual and team sports, to action and adventure, to puzzles and strategy, science and military, fantasy and RPG, arcade and crime fighting, light gun and power pad, and so much more, Nintendo truly had it covered.

Today, we of course live in a far more advanced digital world. The phones in our hands literally carry more processing power than the supercomputers of the 1980s. We are effectively one click (or voice command) away from most any information, and we are far advantaged for it. But a modicum of interesting and practical knowledge nonetheless remains available through the NES, if only we choose to explore it. In the spirit of education along with entertainment, here’s to retro NES gaming far into the future!

Ever since I was a kid during the 1970s, reading the four-color adventures of Batman, Superman, Spider-Man, The Flash, Green Lantern, and the like, I wanted to own my own comic book store. In 1991, I did just that, opening Fantastic Comics & Cards in the Fort Worth area with my brother-in-law, Mike. We even opened a second location. Prior to that, I worked for Lone Star Comics, first in the backroom, then as store manager.

Nowadays, I’m a writer (including a 14-year stint freelancing for The Comics Buyer’s Guide), but I’m still a comic book retailer, selling comics and other pop culture items via my antique mall booth, The Time Machine: Comics & More Store. It is booth #1320 in LoneStar Antiques—when you go, just ask one of the employees at the front desk to show you where the comic book booth is. In addition to old and recent comics, I carry action figures, video games, books (including vintage paperbacks), Hot Wheels, trading cards, records, laser discs, DVDS, toys, VHS tapes, CDs, and other cool stuff. If you’re ever in the Dallas/Fort Worth area, stop by and check it out. Thanks for your business!