If you’re into retro gaming, you probably heard about the recent record-breaking sale of the factory sealed Super Mario Bros. NES cartridge selling for more than $100,000. It was given a 9.4 grade by Wata.

You can watch a concise, informative video by Kelsey Lewin on exactly why that cartridge is worth so much here:

Prior to that record-breaking SMB sale, Heritage Auctions, a prestigious auction house, tested the waters on video games graded by Wata by including several in their Jan. 13 Sunday Internet Comics, Animation, & Art Auction. I wrote about that Jan. auction for AntiqueWeek. You can read the full text of that article below. 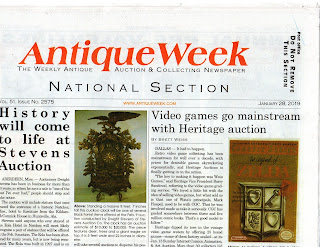 It had to happen.

Retro video game collecting has been mainstream for well over a decade, with prices for desirable games skyrocketing exponentially, and Dallas-based Heritage Auctions, one of the biggest auction houses in the world, is finally getting in on the action. 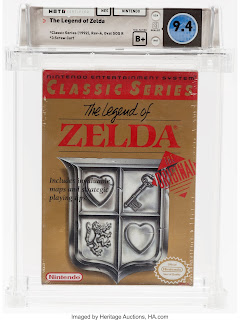 “The key to making it happen was Wata Games,” said Heritage Vice President Barry Sandoval, referring to the video game grading service. “We toyed a little bit with the idea of selling video games, but what sold us is that one of Wata’s principals, Mark Haspel, used to be with CGC. That he was involved made us take it seriously. CGC has graded somewhere between three and five million comic books. That’s a good model to follow.”

Heritage dipped its toes in the vintage video game waters by offering 25 boxed games—some of them factory sealed—at its Jan. 13 Sunday Internet Comics, Animation, & Art Auction. More than 30 collectors bid on a factory sealed 9.4 B+ (Seal Rating) copy of The Legend of Zelda (1987), a groundbreaking action role-playing game for the Nintendo Entertainment System. The NES, which debuted in the U.S. in 1985, revived the console industry after the Great Video Game Crash of 1983. Zelda was the top video game lot in the auction.

To get an idea of the value of specific games, Sandoval said Heritage “checks out eBay and other websites,” but they “don’t put estimates on these types of auctions.”

“It’s up to the bidders to determine the worth,” he said.

Sandoval said he is a “former collector” whose interest is in Atari, but he explained that Atari is a “smaller niche” and that the Nintendo Entertainment System is the go-to console for “big money.” 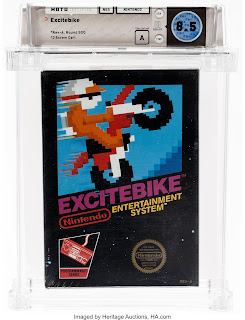 Nearly two dozen bidders competed for a factory sealed (8.5 A Seal Rating) copy of Excitebike, a motorcycle racing game that was an NES launch title, meaning it debuted with the console in 1985. It went for $1,140. The game was designed by Shigeru Miyamoto, known best for creating such iconic Nintendo titles like as Donkey Kong, Super Mario Bros., and Starfox.

Another top earner was Dragon Warrior (1989), the first game in the long-running Dragon Quest role-playing game series. Seventeen bidders drove the price of an 8.5 A (Seal Rating) example to $660. As a promotional tool, Nintendo of America had offered the game free to new and renewing subscribers to the company’s Nintendo Power magazine. 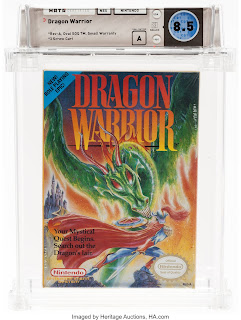 The highest price realized for a game released for a console other than the NES was Double Dragon (1988) for the Sega Master System, which was the closest thing the NES had to a serious competitor during the late 1980s. A 9.6 CIB copy went for $204. The auction also included some loose (cartridge only) Super Nintendo games. The Super Nintendo EntertainmentSystem (SNES), released in 1991, was the follow-up console to the NES.

Sandoval sees correlations between video games and comics. A relatively modern type of collectible (the first video game console was the original Magnavox Odyssey, released in 1972), video games evoke comic books in several ways. Both are colorful and cartoonish, both are meant to be used (as opposed to merely looked at), and the fan demographic is similar.

However, there’s one key difference in terms of collectability. Unlike the vast majority of comic books released during the late ’80s and early ’90s, which are worth practically nothing, a fairly high percentage of video games from this time are quite valuable, especially complete in the box.

Sandoval said that is because “comic books from that era were preserved in large numbers,” thanks in large part to the speculator boom in which people were hoarding comic books in hopes that they could one day sell them in order to send their kids to college. Video games, on the other hand, were often thrown out or sold for pennies on the dollar at garage sales and flea markets once the next big gaming console would come along. And few people kept the boxes and manuals, a consideration not relevant to comics.

Sandoval said Wata will at present only grade games from the Nintendo NES and forward, meaning they don’t deal with video games released for such relics as the Atari2600, Intellivision, and ColecoVision. Currently, they are primarily interested in systems produced by Nintendo and Sega. Sandoval hopes this will change at some point in order to “round things out.”

According to Sandoval, Heritage’s strategy going into video game sales is to start off slowly with internet auctions, get bidders used to the idea, and then come in later with the more expensive stuff for their signature auctions with live auctioneers and bidders.

“This will give people results to look at to lend the idea more credibility,” he said.

Sandoval called the Jan. 13 auction “just the tip of the iceberg” when it comes to video game sales.

“We’re going to auction more every week, and we have some real rarities on tap for our large February Signature Auction,” he said. “For example, we have a ‘not for resale version’ of Halo for the Xbox that may go for as much as $10,000.”
Posted by Brett at 11:26 PM