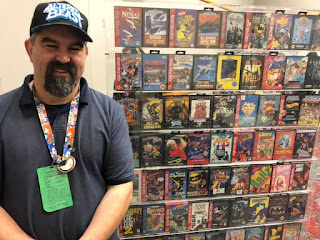 Major props to NES Omnibus contributing writer and popular YouTuber "The Immortal" John Hancock, who is closing in on 100,000 subscribers. John has been at it for many years and has an amazing video game collection (so many complete sets!) that will one day form the basis of a video game museum (it took decades for The National Video Game Museum in Texas to come together), most likely somewhere in the Pacific Northwest. Speaking of, it’s always great seeing John at the Portland Retro Gaming Expo, where he has showed off complete collections of the NES and Sega Genesis. A nice guy all around, John was a good sport and spoke with enthusiasm as I interviewed him about his Genesis collection. At that same show, he did me a huge favor, helping make the trip possible. 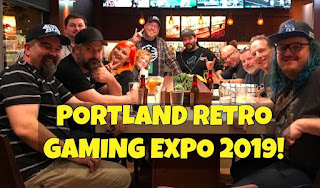 John is a good friend, works hard as a teacher, and is a devoted family man. His NES Omnibus stories reveal a happy childhood with a loving family who would rent games together on the weekends. Recently, John invited me onto his YouTube channel to talk about the NES—it was great fun!

Here’s a sneak peak at one of John’s stories in The NES Omnibus: The Nintendo Entertainment System and Its Games, Volume 1 (A–L). It’s about Ice Hockey.
It was the summer of 1988, and our family was taking our weekly drive into town to rent a movie and a game. Our local selection was limited, but there were always a few new NES titles available. As I walked into the rental store, I was disappointed to notice that most of the NES games had already been rented. My family selected a movie and were waiting on me to decide what to get.  The rule in my house was that if I took too long to decide, then I couldn’t rent a game. It came down to Operation Wolf and Ice Hockey. I took a gamble on Ice Hockey, and it turned out to be a great choice. I spent that afternoon playing it against my older brother. The gameplay was fast and furious and easy to get into. The hours melted away as we played countless games against each other into the night. We played so much Ice Hockey that my parents, later that year, surprised us with it as a “brother’s gift,” one I will never forget. - “The Immortal” John Hancock, YouTube personality
Posted by Brett at 2:26 PM