Book Review: Mr. Sulu Grabbed My Ass, and Other Highlights from a Life in Comics, Novels, Television, Films and Video Games by Peter David 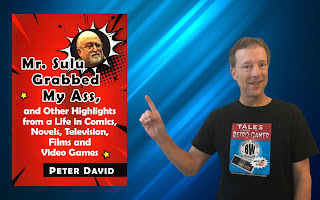 Book Review: Mr. SuluGrabbed My Ass, and Other Highlights from a Life in Comics, Novels, Television,Films and Video Games by Peter David

How are you guys and gals doing? Well, I hope.

With all the crazy going on in the world—the ongoing pandemic, political unrest, economic woes—it’s important to carve yourself out some healing “me time” anywhere you can get it, including from the world of popular culture.

For me, the publication of Peter David’s new amusingly titled book, Mr. Sulu Grabbed My Ass, andOther Highlights from a Life in Comics, Novels, Television, Films and Video Games, was a great way to escape real-life drama for a while, have some laughs, and reconnect with an old colleague (of a sort). McFarland, a company that has published some of my books, sent me a review copy, and it was a welcome sight in my mail box.

Before I get to the book, let’s discuss the author.

A “writer of stuff,” Peter David isn’t exactly a household name—such is the lament of many a writer toiling in relative obscurity—but he is well-known among comic book fans for his critically acclaimed 12-year stint on The Incredible Hulk, plus his work on such titles as Aquaman, Supergirl, and Spider-Man 2099. Star Trek fans still ask him about Imzadi, his Star Trek: The Next Generation novel where Commander Riker and Counselor Troi get it on, and he’s had work appear on The New York Times Best-Seller List. If you’re the type who reads TV credits, you may have seen his name attached to such shows as Babylon 5 and various superhero cartoons, including Young Justice. 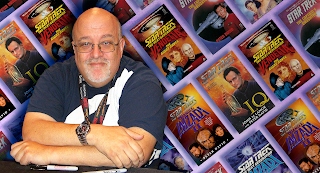 My first recollection of seeing Peter David’s writing was in 1990, when I worked at Lone Star Comics, a retail chain in the Dallas/Fort Worth area. During my lunch breaks, I would read the Comic’s Buyer’s Guide, a weekly, tabloid-sized newspaper that began as The Buyer's Guide to Comics Fandom in 1971. David’s always-entertaining, often-provocative “But I Digress” column ran in CBG from 1990 until it closed up shop in 2013. I wrote reviews for the Comic’s Buyer’s Guide for over a dozen years, and I was proud that my work appeared in the same publication as such an accomplished writer. 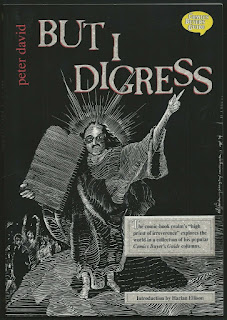 David’s titanic talent with the typewriter (or computer keyboard) is indeed on display in Mr. Sulu Grabbed My Ass, an autobiographical trade paperback weighing in at 219 pages, with a cover price of $29.95. Yeah, it’s a little pricey for the format, but it’s a fun, breezy read that covers the highlights of David’s writing career, his run-ins with various celebrities, and certain aspects of his personal life. David is a bit of a nerd (in a good way), so you’re not going to get the kind of salacious revelations you might read in a rock star bio (which is actually refreshing), but his encounters with Hollywood hotshots are fascinating. Was he really Will Smith’s bodyguard? Did he watch Star Wars with Mark Hammill? And exactly why did George Takei’s grab his ass? I won’t spoil the details behind those anecdotes here.

Oh, and Stephen King visited him in the hospital when he had a stroke (a particularly interesting part of the book), and he got to interview William Shatner when he was just a teenager—thanks to author Robert Ludlum!

There’s something in this book for just about every geeky persuasion. Comic book fans will love the “Make Mine Marvel” and “Comics Stuff” chapters, aspiring writers as well as comic book junkies will enjoy David recalling how he got back into comics and became a professional writer, and science fiction fans will absolutely gobble up David’s stories about writing Star Trek novels, scripting Babylon 5 episodes, and dealing with the late, great Harlan Ellison—there’s an entire chapter on the acerbic dark fantasy and science fiction author. It seems that everyone involved with science fiction has an Ellison story (including yours truly—I met him at a Diamond Comics retailer seminar and will likely relate that memorable encounter here at some point), and David is no exception. 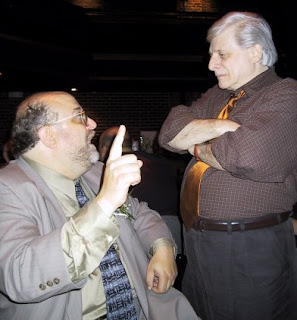 By the time you finish David’s autobiography, you may know more than you ever wanted to about the author, such as the fact that his daughter Caroline never learned to crawl and that it was difficult getting another daughter, Shana, to take a nap when she was little. However, the book never gets bogged down too heavily by any one topic, and David injects enough humor into the proceedings that you’ll likely never get bored by any chapter. He speaks glowingly of his kids and his current wife while resisting the temptation to trash his ex. I can certainly respect that, though the trashing, which he implies in the book is something he could easily do, probably would have made for fascinating reading.

Overall, Mr. SuluGrabbed My Ass is a well-rounded autobiography that never overstays its welcome. You wouldn’t necessarily want to binge-read it in a single afternoon, but it is fun to read a chapter here and there in your spare time, such as during your subway work commute or while you’re waiting in line at the post office. Or, when you just want something agreeable to read while you’re unwinding after a long day at work.

Now, excuse me while I go research a short-lived TV show called Space Cases, which I had never heard of prior to reading this book. David created the show with Billy Mumy, who played Will Robinson on Lost in Space. Not unlike this book, it sounds well worth checking out!