I'm in a Movie! EXCLUSIVE SUPER MARIO 64 SCENE from Playing With Power: The Nintendo Story 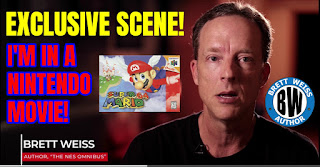 Want to check out an EXCLUSIVE scene from the forthcoming Playing With Power: The Nintendo Story documentary? It is on the importance of Super Mario 64 to the gaming industry and features clips from me, Brett Weiss, longtime gaming journalist and author. Watch the scene by clicking HERE.

Here’s what you need to know about the documentary:

Written and directed by Jeremy Snead, executive produced by Sean Astin and featuring interviews from Wil Wheaton and Alison Haislip to Ron Judy (Co-Founder Nintendo of America), Nolan Bushnell (Co-Founder Atari), and Tom Kalinske (Former CEO Sega Of America), the docuseries covers the origins and journey of Nintendo from the 1800s until today. Playing With Power: The Nintendo Story joins the growing list of exciting new Crackle Original Series and will be available to watch for free when it makes its World Premiere on March 1, 2021 exclusively on Crackle. Playing With Power: The Nintendo Story​peels back the curtain on the famously-secretive Japanese company that would eventually take the global videogame industry by storm. Discover the humble beginnings of a gaming business that began many decades before the invention of television, and ride along the bumpy road of hits, misses, and wild ideas that turned Nintendo from a local playing card maker into a worldwide household name. Narrated by Sean Astin, the electrifying story is presented by an ensemble of Nintendo personnel, celebrity icons, and industry veterans including Wil Wheaton, Alison Haislip, former Nintendo CEO Reggie Fils-Aimé, and head of Xbox Phil Spencer. This five-part series will have its world premiere on March 1, 2021 as a Crackle Original Series.

And some info on me:

Video game historian, journalist, and national columnist Brett Weiss is the author of a dozen books, including the Classic Home Video Games series, The 100 Greatest Console Video Games: 1977-1987, Encyclopedia of KISS, The SNES Omnibus volumes 1 and 2, and the newly released The NES Omnibus Vol. 1 (A-L). Weiss has been published in countless newspapers and magazines, including Game Informer, GameRoom Magazine, Fangoria, Filmfax, AntiqueWeek, the Comics Buyer’s Guide, and the Fort Worth Star-Telegram. He’s also a frequent guest panelist at gaming conventions. Check out Weiss’s YouTube show, Tales from a Retro Gamer.