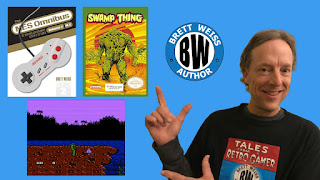 There were only five games released for the Nintendo Entertainment System based on DC comic book heroes: Batman: The Video Game, Batman: Return of the Joker, Batman Returns, Superman, and Swamp Thing. In a new video, I rank and review each one. With this in mind, I decided to share a nostalgic Swamp Thing story from my forthcoming book, The NES Omnibus: The Nintendo Entertainment System and Its Games, Volume 2 (M-Z), which is now available for pre-order. It was written by Krystle Tiedeman, the Producer of The King of Arcades.

Thanks for reading and enjoy!

My Swamp Thing with the retractable hand was quite possibly the coolest action figure of all time. I enjoyed making him hold things like straws and pretzels and then have him pull them toward me. While using Swampy actually took much longer and I broke a lot of snacks in the process, I thought of it as my favorite mutated vegetation monster lending a helping hand. My best friend discovered that the cord for the NES controller fit between Swampy’s solid plastic fingers, and she would squeeze his green legs together to reel it in with his super swamp grip and say in her best Swamp Thing voice, “Plaaaay wiiiiith meeee.”

I took that little guy everywhere, including the tiny shop uptown where I bought my baseball cards, comic books, and Pogs. John’s Card Shop wasn’t much bigger than a closet, but on a summer day with an extra-large Slush Puppie, I could spend hours in there searching for treasure. Swamp Thing was peeking out of my messenger bag while my friend and I dug through bins of comics, searching for anything with Venom on the cover. The guy working the shop may have been irritated by our fruitless attempts to slurp up the last of our frozen cherry coke when he said, “I got a Swamp Thing comic, ya know.”

He proceeded behind the counter and pulled the issue from some magical secret storage. Then he narrowed his eyes at me and pointed to Swampy. He had a New York accent that sounded especially foreign in our small, coal-cracker town. “You got Nintendo?” Then he slid the NES Swamp Thing—brand new in the box—next to the comic. I wish this was the story of how I got the game, and my best friend and I sat with Swampy between us playing it until we defeated the weird pistachio thing and restored peace to the swamp. Unfortunately, we had spent most of our money on snacks, and there was no way we could afford the game. We could barely afford the comic. Not to mention, the shop didn’t normally sell games, so I’m pretty sure this dude was trying to sell it on the side and wouldn’t hold it for us until we had the cash. No, this is the story of how my best friend and I sat on my front steps with Swampy between us and lamented our poor financial choices.

It wasn’t until a few years later that I actually got the game. The well-worn cartridge was missing most of the stick-on label, and I had no way of knowing if it would even work, but I pulled it out of the used game bin at the farmers market and promised to love it no matter what. By then, my aunt had accidentally snapped the string for Swampy’s retractable hand. It seems even super-mutants can overextend themselves, and he would serve as pretzel butler no more. When I told my best friend I finally had the Swamp Thing game in my possession and was borrowing my uncle’s Nintendo to play it, she was just as excited as I was. In fact, she illegally printed a color Swamp Thing in the school computer lab so Swampy could join us in spirit.

Blowing into the cartridge, waiting for the white text on the license screen to turn into the start screen—these are memories that could fit any game. But the anticipation in this case was much more intense. We were nose-to-the-screen close when the opening animation started. The music was full of suspense, and we were eager for Swamp Thing to make his entrance, but a weird California Raisin without sunglasses appeared first. The Grape Face was supposed to be Dr. Arcane, and his arrival brought the first fears that this game might not live up to the hype built by years of yearning. The flaming Holland fleeing to the swamp refueled our hopes, and the title screen was so perfect, we cheered. If only ol’ Swampy could see himself on the screen this way. Except, Grape Face was back seconds later to remind us that nothing ever translates perfectly to video games.

We died. Repeatedly. In the first few minutes. Video game instinct taught us to avoid water so we jumped onto the floating can and couldn’t figure out why we were taking damage. There was a lot of frantic yelling at the stupid game. It took a long time to realize we were one with the water, and it would welcome our swampiness, but the trash was painful. We were already halfway through the first level—thanks to dodging and quick reflexes alone—when we realized we could actually hurt the evil creatures attacking us by doing a weird swamp-fart jump-punch-shoot. After that, the game redeemed itself with some of the most bizarre things we’d ever seen, such as floating knives appearing from nowhere, eyeballs and Cthulhu heads attempting to kill us, swamp-fart sound effects interrupted by mosquito-fart noises, monkeys carrying spears, and ghosts of a Xenomorph wearing a smiley face mask above its mouth. We beat the first boss, who I now realize must be a relative of Trogdor the Burninator.  Dr. Arcane, who looked like chewed grape Bubble-Yum, prepared to send more foes our way. He specifically said he wanted Swamp Thing ALIVE, so the fact they keep trying to kill us was a little confusing.

Level two greeted us with bouncing Phantasm balls, flying Evolver robots, and a layout that took seemingly forever to play by jumping around aimlessly. Turns out, once you’ve got the hang of the game—which is just a lot of jumping, really—it’s pretty straightforward play. Not exactly easy, but doable if you manage to build up enough life to take the unavoidable hits. It was really cool to stand Swamp Thing in a safe spot and check out the details of the background, because the programmers did a great job with texture and shading. The graphics really capture the feel of the comics in an immersive way.

In the third level, we finally got to check out the swamp. There was an unintentional guest appearance by Pterri the pterodactyl from Pee-Wee’s Playhouse, or so it seemed. Then we became one with the trees and climbed them as a pair of green gooey eyes. And—the best part—we squished our big Swampy self into a tiny apple and traveled through a sewer pipe like a Killer Tomato. By this point in the game, the music we thought was so cool in the beginning was now driving us insane, and we were hoping this really was the last level so we could get on with our lives. Yes, we love Swamp Thing. Yes, we had dreamed about this game since that day in the comic shop. Yes, we were thrilled to finally be playing it.

But really, aside from the graphics, the strange creatures, and the obvious awesomeness of being Swamp Thing, there was nothing remarkable about it. It actually got boring during that second level, and we’d already finished most of our snacks during the trial and error it took to figure out the controls. My best friend had her feet on the back of the couch and her head on the floor and was having a conversation with paper Swampy about how lame the game was. I was almost ready to give up around the deforestation and planted cars section, but I felt I owed it to Swampy to ride it out. I’m glad I did. Being able to hide in the trees while fighting the bat that was poorly named Skin Man was actually pretty cool.

Unlike other games, which might amp your adrenaline with the last level leading up to the final fight, this final level in Swamp Thing felt pretty much the same as the previous levels. However, it was surprisingly hard as figuring out where to jump next was not always intuitive. When I finally hit the last battle with the mutated Dr. Arcane, my best friend regained interest. The pistachio zapped out the ultimate villain: Dr. Arcane had transformed from a Grape Face into a Spider-Blueberry Head. It was almost impossible to dodge the flames, the pistachio, and the final boss. Miraculously, I did it, and we earned ourselves a beautiful tribute to Swamp Thing, may he rest in pieces. - Krystle Tiedeman, Librarian, Producer of The King of Arcades

US residents can order signed copies of my retro gaming books direct from me HERE.