8 Nintendo NES Couch Co-Op Games You MUST Play - Including Contra! 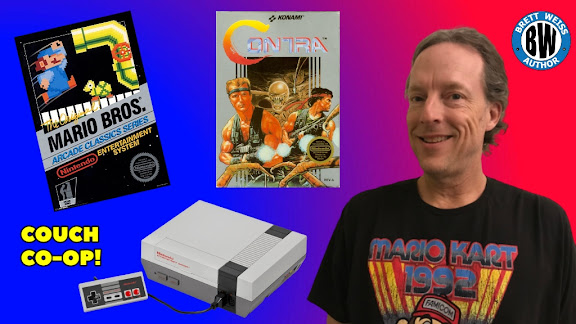 I recently uploaded a video on YouTube of eight couch co-op games you MUST play for the Nintendo NES. These are titles I’ve played countless hours on over the years, so they come highly recommended. You can watch it HERE.

Contra is among these games I included, so I thought it would be cool to post text from the Contra chapter in The NES Omnibus Vol. 1 (A-L), including author Patrick Hickey Jr.’s nostalgic "Insider Insight" story down below. ENJOY!

Putting the “hard” in hardcore, Contra is a tour de force of macho gaming, casting the player in the role of a musclebound soldier from the Special Forces elite commando squad. Armed with the ability to run, jump, duck, and ﬁre a gun (at aliens and their evil henchmen), the guerilla warrior must blast his way through eight stages of brutal action: Jungle, Base 1, Waterfall, Base 2, Snow Field, Energy Zone, Hangar Zone, and Alien’s Lair. Bases 1 and 2 sport a behind-the-soldier perspective while Waterfall features vertical scrolling. Capturing ﬂying power-ups enables the player to upgrade their ﬁrepower to machine gun, laser, ﬁreball, rapid ﬁre, and, most famously, the awesome spread gun. Like its more graphically detailed (yet less well known) coin-op counterpart (Konami, 1987), a second gamer can join in for cooperative action. Pressing up, up, down, down, left, right, left, right, B, A at the title screen lets the player begin with 30 lives, a maneuver that popularized the famous Konami Code.

Memories: As with Castlevania, I bought Contra shortly after it came out. Buzz for the game was strong, and it did not disappoint. I absolutely loved it. I didn’t find out about the Konami code until later, so I played it over and over again with the few lives it would give you. I didn’t mind, though, because I dug every second of it and didn’t know any better. I got so good at Contra—jumping and flipping away from bullets like some kind of buff ballerina—that I beat it without using any cheats. This says more about how many hours I put into the game than it does how skilled of a gamer I am.

Notable Quotable: “Two-player contests are always in demand, because most video games are designed for a solo gamer. Contra is doubly welcome, because it is a truly outstanding action epic.” - Computer Gaming World (June 1988)

Notable Quotable: “Requires all the skill you can muster. The aliens come at you from every which way, and only the fastest responses will save you! The action is non-stop…graphics are quite good…If you like action, you should find many hours of exciting play here.” - Computer Entertainer (March 1988)

Notable Quotable: “The commandos are awkward to control, and have an annoying habit of crouching down facing in the wrong direction. The graphics improve throughout the game, but then again they have to; the early levels look primitive in the extreme. So, considering the NES games coming out at the moment—games that have outstanding graphics, sound, and playability—this really can't be recommended.” - Mean Machines (January 1991)

Insider Insight: It was the summer of 1988. I wasn’t even five years old yet, but I had amassed quite a reputation for myself in the apartments where I lived. I could already read, I always ate my vegetables, and I loved gaming. R.B.I. Baseball, Super Mario Bros., you name it, I was awesome at it.

Then one day my neighbor—let’s just call him Mike (who 20 years later would end up in prison on a murder charge. Hey, it was Brooklyn.)—introduced me to a game that changed my life forever. It kind of looked like Mario, but it was in the jungle and you had guns. Wait, this was nothing like Mario. This was nuts. The guns change when I pick these things up? This was amazing. But it was hard. I didn’t want to play anymore. Wait, what? There’s a fix? A secret code?

The Konami code allowed me to explore the levels of Contra, to take in its undeniable beauty and killer soundtrack and learn the ways of the alien force attacking. That code wasn’t just a cheat to me—it was an introduction to gameplay design, mechanics, and the thought that what you saw wasn’t what you got and that a video game is always more than the sum of its parts. Without Contra, it’s fair to say I don’t end up with the appreciation of games that I have. Yep, it’s that heavy.

While it also incited a cheating scandal in gaming the industry had never seen before (real men don’t need the code to finish Contra, or so they say) and changed the way we play in other regards, the code’s inclusion on one of the best side-scrolling shooters was just another reason why the game is so special. It also fostered an extra strong bond between players in two-player action. Allowing players to “borrow” lives (the same way that a neighbor’s mother would borrow bread no one ever returned) the stronger player could essentially guide the weaker player through the level.

Great games are played in a variety of ways. Contra is an excellent single-player shooter and an even better two-player romp. Add in the storied Konami code, and you’ve got a game that is absolutely iconic. - Patrick Hickey Jr., author of The Minds Behind the Games, founder and editor in chief of ReviewFix.com