NES Memories from The NES Omnibus: The Nintendo Entertainment System and Its Games, Volume 2 (M-Z) - NOW ON KICKSTARTER! 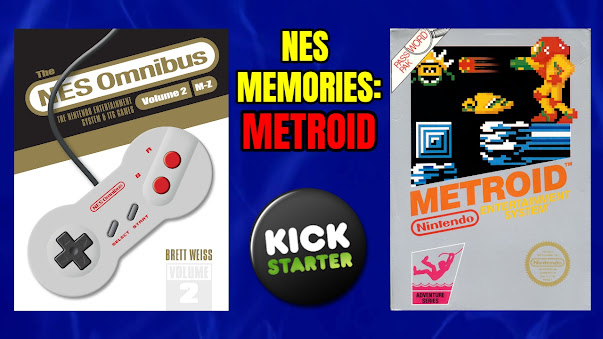 In addition to reviews for 350+ games and all that goes along with that, such as history, box art, screenshots, developer info, and the like, The NES Omnibus Vol. 2 (M-Z), which is NOW ON KICKSTARTER, is loaded down with essays on and nostalgic stories about many of the games featured. This book was a labor of love for myself and all the contributing writers involved, including such noteworthy talents as 8-Bit Eric, Chris “The Irate Gamer” Bores, John “Gamester81” Lester, David Warhol (former Intellivision and NES programmer), Greg Sewart (former Electronic Gaming Monthly editor and reviewer), and many other content creators and personalities. The NES Omnibus Vol. 2 (M-Z) will ship Oct. 28. Enjoy an advance look at this terrific Metroid essay by artist and developer Kale Menges:

Few games have had an impact in my life like Metroid. Without a doubt, it is my favorite video game of all time. In fact, it is the game that most inspired me to become a developer. I first played Metroid in the autumn of 1989 at a cousin's house and was immediately entranced. Being a somewhat introverted kid growing up, and at the time coping with my family's recent cross-country relocation, I found myself easily relating to protagonist Samus Aran's isolation and loneliness in her quest to eradicate the devastating bio-weapons being harvested by space pirates on the planet Zebes. There was something so incredibly surreal about the way Metroid seemed to defy the 2D platforming conventions of the time. The game was just so amazingly innovative from both a creative and a design perspective.

After playing so many other platform games on the NES back in the day, merely being able to scroll left was mind-blowing. The morph ball power-up was a stroke of genius, a design decision the team arrived at when they simply couldn't figure out how to effectively animate Samus crawling (the technical limitations of the NES hardware were what made so many of these 8-bit games so great). Samus' screw attack, a special ability that allowed her to somersault right through enemies like an energized saw blade, remains famous as one of the greatest power-ups in the history of gaming.

The game's password system (the cartridge version's replacement for the original Famicom Disk game's writable save feature) provided players with what basically amounted to a primitive hacking tool that opened up a unique dimension of experimentation and exploration rarely found in console games. Metroid's non-linear gameplay, set in an exotic and hostile ecosystem where the player is the alien exploring a vast subterranean landscape of labyrinthine caverns and ancient ruins of a forgotten alien civilization, creates a fantastic gaming experience that crafts a wonderfully unique experiential narrative that somehow always feels personal. Even the soundtrack is perfectly attuned to the game's atmosphere and ambiance. There is something almost romantic about it all, in a classic pulp sci-fi sort of way.

I have no idea how much of my life I've spent navigating that hostile planet's dark interior, desperately searching every nook and cranny for hidden power-ups and secret passages. Metroid remains one of the gold standards for how to do hidden secrets in game worlds, and it succeeds so well at teaching players to explore and experiment (rather than just holding their hand and spelling everything out for them all the time), and to view roadblocks as signs that they're on the right path. Even the game's protagonist, Samus Aran, represented a veritable ace up the sleeve as the game's ultimate secret, her true identity only being revealed if the player finished the game within a certain time limit. Nowadays, Metroid's design philosophies are central tenets of the genre it helped create, taking 2D platform games to a whole new level of depth and challenge well beyond mere running and jumping.

I don't know how many times I've defeated that mechanical life vein known as the Mother Brain, but I can draw out the entirety of the game's immense map from memory. I still do a play-through of the game at least once a year, even three full decades since the first time I played it. And yet, despite the game's technical shortcomings (pervasive slowdown in enemy-crowded areas and quite a few exploitable glitches), and even though I've thoroughly relished and enjoyed all of the games in the Metroid series over the years, the original NES game still stands out to me as more of a pure, focused experience whose simple narrative perfectly complements its wonderfully organic game design. - Kale Menges, artist and game developer