SAMPLE PAGES! - Excerpts from The NES Omnibus: The Nintendo Entertainment System and Its Games, Volume 2 (M-Z) 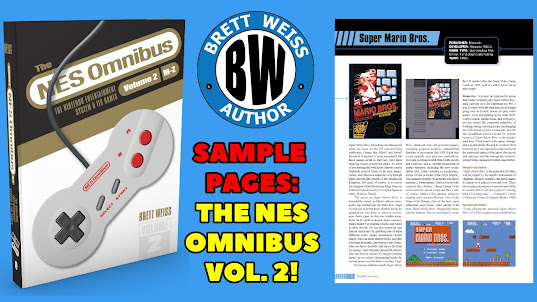 Here’s a little backstory on The NES Omnibus project:

The SNES Omnibus was a resounding success. Not only have both volumes sold well, they have received rave reviews, and Schiffer Publishing was willing to listen to my pitch for another two-volume set for a major console. The company readily agreed, so I got busy on it. And then it occurred to me that before doing another two-volume set, I could write a single-volume Omnibus to give readers a break on their bank accounts before asking them to shell out for two more books.

As such, The NES Omnibus was conceived, and I put the prospective two-volume Omnibus project on hold. I’ve been a huge fan of the Nintendo Entertainment System ever since I got my original console for Christmas in 1987 (which you can read about in my preface to The NES Omnibus Vol. 1), and I was delighted at the prospect of writing a big, beautiful, single-edition hardcover book about one of my favorite game systems.

But then reality set in. Once I got to work on The NES Omnibus, I couldn’t control myself. I simply stuffed too much information and too many photos on each page for the book to be readable with most of the games only getting half a page each. Plus, I wanted to include vintage ads for many of the games and more nostalgic stories from contributing writers. The latter is what so many of you like the most about the Omnibus books, so those were a top priority. And, to be perfectly honest, they’re my favorite aspect of the books as well—it’s super fun to read and edit the stories and share them with you.

Said stories in this book, which I call “Insider Insights,” are awesome. Popular YouTuber “The Immortal” John Hancock reveals what it was like renting games with his family when he was a kid. Legendary programmer David Warhol gives behind-the-scenes info on developing Maniac Mansion and Monster Truck Rally. Noted authors Ken Horowitz and Patrick Hickey Jr. share their love of Super Mario Bros. 2 and Tecmo Bowl respectively. Krystle Tiedeman, the producer of The King of Arcades, wrote a hilarious story about playing Taboo with friends. And you’ve simply got to read YouTuber Christopher Pico’s epic saga of playing Mad Max as a young game tester back in the day. If you like video game culture and nostalgia, you’re going to love this trip back through time to the ’80s and early ’90s from a variety of perspectives.

As for my memories in the book, I wax nostalgic about a bunch of NES titles, including such personal favorites as Mario Bros., Popeye, Super Mario Bros., Super Sprint, and even Trog!, a hidden gem for the console. I trash some terribly disappointing games as well, such as Superman and Super Pitfall. And, of course, I wrote a synopsis for each game.

In addition to stories, reviews, and synopses, The NES OmnibusVol. 2 (M-Z) features box art, screenshots, developer and publisher info, and historical data, along with quotes from vintage magazines and respected websites to give readers a well-rounded look at each game. I even quote other books as this is a scholarly, research-heavy effort as well as a book that is meant to entertain. At the back of the book you’ll find listings for foreign NES releases and miscellaneous titles, as well as a pair of super insightful essays (by Shane Stein and Patrick Hickey Jr.) about specific aspects of the console.

As always, thanks for reading, and thanks to everyone who has pre-ordered the book or backed it on Kickstarter.