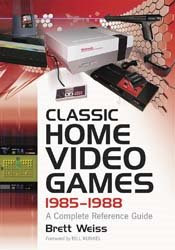 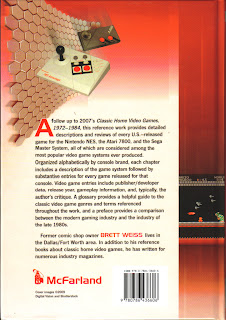 Introduced by Bill “The Game Doctor” Kunkel, one of the most important figures in all of classic gaming, Classic Home Video Games 1985-1988 contains detailed descriptions/reviews of every U.S.-released game for the Nintendo NES, one of the best, most popular video game systems ever produced. The book also contains detailed descriptions/reviews of every U.S.-released game for the Atari 7800 (revised, expanded, and updated from Vol. 1) and the Sega Master System, both of which maintain a loyal fan base to this day.Organized alphabetically by console brand, each chapter in this book includes a description of the game system, followed by substantive, literate, fun-to-read entries (most 125-185 words in length) for every game released for that console, regardless of when the game was produced (meaning hundreds of games are covered).

Each video game entry includes publisher/developer data and the release year, along with gameplay information and, usually, the author’s critique. A glossary provides a helpful guide to the classic video game genres and terms referenced throughout the work, and a preface provides a look at the industry at the time (and how it relates to gaming today), along with anecdotes from the author, a full-time writer who has been a devoted gamer and game collector since the days of Pong, Pitfall!, and Pac-Man.