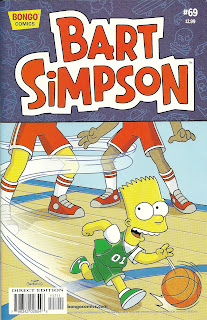 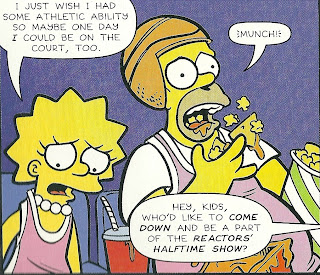 The Simpsons cartoon series has been on the air since 1989, and various comic-books based on the semi-functional family have been published since 1993 (in addition to the Simpsons Illustrated magazine, which came out in 1991). So you’d think the creators would run out of ideas at some point, right?

“Hoop Schemes,” the lead story in Bart Simpson #69, posits a fun and clever premise: Mr. Burns buys a women’s professional basketball team and moves it to Springfield. The story taps into Lisa’s feminist nature, Homer’s sexism (not to mention his gluttonous tendencies), and Mr. Burns’ evilness (which borders on mad scientist-like behavior here).

The second half of this double feature is an agreeable little yarn called “…Bart Simpson Shall Do My Bidding,” which finds Sideshow Bob in prison, controlling Bart Simpson (who eats his own shorts) over the phone with a Pied Piper-like flute.

The intermission is a ho-hum two-pager by the usually reliable (and often great) Sergio Aragonés, best known for Groo the Wanderer and various MAD magazine strips.