Buffy the Vampire Slayer for the Game Boy Color - Review 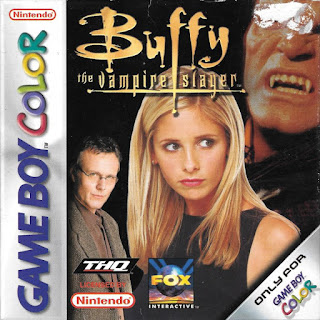 Back in the late ’90s and early 2000s, I wrote for the late, lamented All Game Guide. It was a fun writing gig, and I became an editor as well. The company, which was based in Ann Arbor, Michigan would send me games to review (unfortunately, I usually had to send them back). Buffy the Vampire Slayer was my favorite TV show at the time, so I jumped at the chance to review the Game Boy Color cartridge based on the program. Here’s that review:

Into each generation, a Slayer is born. One girl, in all the world, a Chosen One. Or so the legend goes on Buffy the Vampire Slayer, a weekly horror series airing on the WB. Created by Joss Whedon, the show follows the exploits of Buffy Summers, gorgeous college girl by day and vampire hunter by night.

Using her super strength, heightened agility, lethal weapons (primarily sharp stakes) and wicked one-liners, she patrols the town of Sunnydale, which sits on the threshold of the Hellmouth, a vulnerable spot where forces of darkness are frequently unleashed upon the Earth.

Joining Buffy in her fight against the undead are members of the so-called Scooby Gang. The Scoobies include Willow, a computer hacking witch; Xander, a wisecracking wiseacre; and Anya, an ex-demon with a propensity for social faux pas. Watching over the group (and Buffy in particular) is ex-librarian Giles, an erudite British gentleman with a fondness for arcane, mystical reference tomes.

Buffythe Vampire Slayer for the Game Boy Color finds Buffy in a world of trouble. Mesmerized by vampire Ethan Rayne's reading of the Book of Ancients, a coven of vampires from different countries has descended upon Sunnydale by way of the Hellmouth.

These creatures of the night are raising hell in various spots around town, including the old mansion, the graveyard, the zoo, the cemetery, the sewer and the city streets. They've even crashed The Bronze, which is the local hangout, and The Initiative, which is a covert military facility that captures and/or kills vampires and demons.

As the Scooby Gang's key member, Buffy Summers, you'll run, jump and slay your way through eight levels of vampire-infested action. To vanquish a vampire, you must hit it and/or kick it until it falls beneath your slayer might. Once a vampire is down, you must stake it and watch it turn to dust. You can also throw the undead, block hits, roll on the ground and perform super leaps.

If you get knocked down, a vampire will jump on you and drink your blood. No matter which level you are playing, you will face only one vampire at a time. Arrows point your way to each successive bloodsucker. Throughout the game you can find soda cans that will enable you to do super punches and kicks. Paint cans and other items are scattered about for use in throwing at enemies.

In between each level you can watch a series of cut-scenes featuring dialogue between the characters. One scene even refers to Angel, the Buffy spin-off featuring her ex-boyfriend, a vampire with a soul. Angel's secretary Cordelia phones to warn Buffy of a dream that Angel has had in which Buffy is in danger.

A game of Buffy the Vampire Slayer ends when Buffy's life bar has fully depleted. After each level, a password appears, giving you a save point for after you shut down your game system.

As expected, Buffy makes her way around various locations throughout Sunnydale and kills vampires. What wasn't expected was just how mundane this could be. No matter how far you progress in the game, Buffy only goes up against one vampire at a time. Apparently, being undead makes the creatures of the night brain dead and they never think to pair up or form a pack. Buffy is supposedly going up against a coven of vampires, but they never act very coven-like.

Until you reach the Hellmouth (the seventh level), the game is ridiculously easy. To defeat most of the vampires, all you have to do is punch them a couple of times, then do a lower kick to knock them down, then stab them with your trusty stake. For the average gamer, it is entirely possible to beat the game in one sitting. The bosses are about as easy to kill as the standard enemies.

The levels in Buffy have no obstacles (such as electrified fences) and no traps (such as fiery pits). On some of the levels, you do have to jump up to reach platforms, but your life is never in danger while you are jumping. Even worse, there are no non-vampire enemies to fight. Where are the werewolves or the demons? There's not even a lousy rat to trip over. You can see the eyes of the hyenas at the zoo, but they are merely background eye candy.

And what of hidden items, alternative weapons and secret passages? None to be found. Sure, occasionally you can pick up a can or something to throw at the vampires, but this feature is all but useless. It's easier and more expedient to simply engage the vampires in hand-to-hand combat. When a vampire isn't onscreen, you can't even pick up the items. 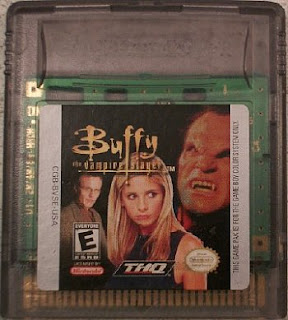 The graphics are actually quite good. The animation is nice and the levels are replete with detail such as armor in the mansion and hieroglyphics in the Hellmouth. Buffy fights smoothly and with style. The vampires are fairly well drawn and come from a variety of ethnic backgrounds. The theme from the television series has been replaced by generic, forgettable songs. The sound effects are solid.

Overall, Buffy the Vampire Slayer for the Game Boy Color is a disappointment. Watch the show; skip the game.