Created by Greeting Carts, a company “developed the world's first playable greeting card,” and that produces personalized Nintendo NES games for special occasions, Beerslinger side-steps this business model a bit by giving users a straightforward, arcade-style game that evokes the 1983 coin-op classic, Tapper, but with enough differences to make it stand out. 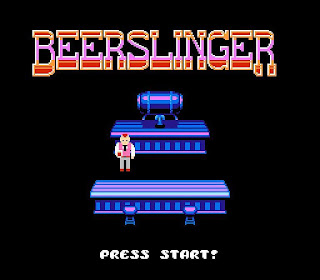 As a bartender, you walk back and forth between two horizontal bars, filling mugs from kegs placed at the top bar and bringing them down to customers that walk up to stools positioned on the lower bar. If a customer sits at his or her stool for too long before being served, you get one “miss.” If you get three misses, it’s game over.

A game begins with two kegs and two stools, but these increase to four kegs and six stools as you progress, forcing you to move quicker and be more alert. Each keg is filled with a different type of ale—Lager, IPA, Stout, or Wheat—and you must serve the correct type to each customer. In addition to text, audio cues let you know which type of beer each customer wants. 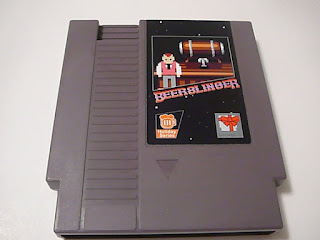 Unlike Tapper, customers don’t walk along the bar(s) toward the end. Rather, they simply walk up and take a seat at their stool, waiting to be served. Also, Tapper has four customer bars per screen while Beerslinger has just one, and Tapper has themes: cowboys, athletes, punk rockers, and space aliens.

In short, Beerslinger is more simplistic than Tapper, but it’s still a lot of fun. Unfortunately, it has a fatal flaw that ruins the experience. Before I get to said flaw, let’s focus on some of the positives.

While it borrows from Tapper, Beerslinger carves out at a little niche of its own, as though it were a prequel of sorts. The cartoonish graphics and black backgrounds give the game a nice, classic look, and the voice effects and musical jingle are cool touches as well. Solid controls and the pick-up-and play aesthetic give the game the feel of a lost Atari 2600 title, but one with better  music and graphics than that machine can generate.

Sadly, the game ends abruptly after seven screens, and the difficulty level doesn’t really amp up until screen six. Even then it’s pretty easy to finish. I like that you can continue if you get three misses (at least in screens one through six), and the game has some nice comical flourishes, such as your bald boss telling you, “Maybe you’re not cut out for this job. You’re fired! But you can play this level again!”

In summary, I wish the positives outweighed the negatives. In fact, if Beerslinger continued indefinitely (or at least for 10 more screens) after the seventh level, I could heartily recommend it. As it stands, I need more screen time. 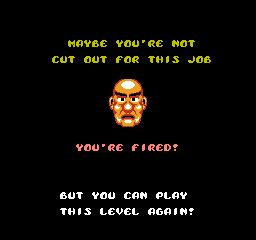