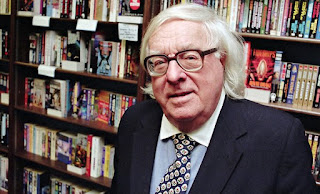 The timelessness of Ray Bradbury's impressive collection of science fiction and fantasy tales is once again evident in ABC's new summer series, The Whispers. Based on "Zero Hour," a story from Bradbury's The Illustrated Man, a collection of short stories focusing on the effect technology has on human psychology, the series explores the often vastly different ways in which adults and children react to paranormal activities. In honor of the series, which premiered on June 1st and is available to watch via ABC Go and local channels, let’s take a look at five of the best adaptations of his famous works. As any Bradbury fan knows, the dynamics of how humans react to the unexplained is a theme the legendary author enthusiastically embraced in many of his writings that have been adapted for the screen.

Bradbury often took a hands-on approach to his early adaptations, as was the case with "I Sing the Body Electric," the 100th episode of The Twilight Zone that originally aired in 1962. Based on a short story from Bradbury's anthology series of the same name, it's the tale of a widowed father who attempts to fill the void left after his wife's death by purchasing an android grandmother, specifically focusing on the oldest daughter's hesitation to accept "her" because of a fear of losing another loved one. Interestingly enough, Twilight Zone fans were disappointed, expecting more from a Bradbury-penned story. However, it's still a relevant observation on our natural inclination to form attachments with inanimate objects.

Fahrenheit 451, Bradbury's classic story about book burning, is set in a futuristic world where banned books are confiscated and destroyed. In a radio interview three years after the book's 1953 publication, Bradbury said that the story was inspired by the McCarthy era and a fear that the Red Scare of the time would soon extend to certain books being deemed objectionable. The story, adapted into a 1966 film, is also based on Bradbury's concern that newer forms of media would take away from what can be learned from reading books, the unintended consequences of censorship.

While Bradbury did write some original stories for The Ray Bradbury Theater anthology series, he also borrowed from his vast collection of short stories, including "Banshee" and "A Sound of Thunder," and repurposed characters from previous tales. Bradbury has said that he was often inspired by events in his own life, as is the case with the episode based on "The Pedestrian," about a man living in a society where everyone watches TV at night. The man habitually goes for a walk in the evenings, until he encounters a robotic police car that finds his actions suspicious, since no one else is ever walking around. It was inspired by an encounter Bradbury had with Los Angeles police officers when walking in a neighborhood not known for its pedestrian traffic.

Based on a Bradbury short story of the same name, "The Jar" first appeared as an episode of The Alfred Hitchcock Hour in 1964. The same story was adapted for the '80s revival of that series. Once again tapping into the human tendency to find inspiration in things, the story centers around a struggling artist who finds the success he craves after incorporating a mysterious jar into his exhibit. He later learns that there's more to the jar than meets the eye. On a broader level, it's a cautionary tale of the pitfalls associated with seeking success at any cost, and the price that's sometimes paid. The 1986 episode is also noteworthy because it was directed by a then-unknown Tim Burton.

Something Wicked This Way Comes, a 1983 film adaption of the Bradbury novel of the same name, tells the tale of a mysterious carnival that comes to town. Two local boys soon discover that it's not all that it appears to be, and they proceed to warn the townspeople. Bradbury himself had a hand in writing the screenplay, ensuring that the film retained the basic sense of something menacing through the use of imagery and foreshadowing, another technique common in Bradbury's writings. It's a story that stands out because it plays on the natural sense of curiosity that sometimes prevents people from realizing that something is not as it seems. You might not have to settle for the 80’s version for much longer though, given the fact that Disney is reportedly remaking the film.

Ray Bradbury is among those rare breed of authors who transcends generations. It's easy to see why he is credited with taking the sci-fi genre from its early reputation as a fringe niche to a form of entertainment that appeals to the masses in all of its forms. Clearly, Bradbury's ability to tap into our collective fears, wonders and imaginations is still relevant today - and likely to be just as fascinating to future generations.
Posted by Brett at 5:47 PM