Christmas Carol vs. The Ghost of Christmas Presents -- Intellivision 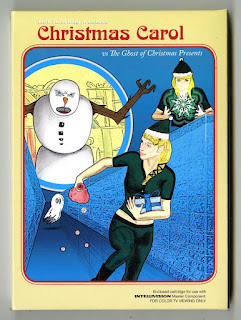 Christmas Carol vs. The Ghost of Christmas Presents
Intellivision
Publisher and Developer: Left Turn Only
www.carolvsghost.com/index.html
Grade: 4.5 Stars (Out of 5)

Making its debut at the 2012 Classic Gaming Expo, Christmas Carol vs. The Ghost of Christmas Presents is one of the most polished, most professionally published homebrews that I’ve ever had the pleasure of playing. It’s not my favorite —Medieval Mayhem for the 2600, Jr. Pac-Man for the 7800, and D2K Arcade for the vie for that honor—but it’s challenging, nice looking, and a heck of a lot of fun, and the production values are first class all the way.

As soon as you plug in Christmas Carol, you’ll know you are in for a treat. The title screen features a nicely rendered Christmas tree with twinkling ornaments, and the music is a delightful interpretation of Mykola Leontovych’s classic, folk-inspired Christmas tune, “Carol of the Bells.”

Christmas Carol is a maze game that borrows from  (don’t they all?), but has a distinct flavor all its own. Using simple, four-way controls, players guide Carol Greenleaf around a series of labyrinthine caverns, picking up presents (in the form of Christmas gift boxes) while avoiding a -like ghost (the titular “Ghost of Christmas Presents”). If the ghost touches Carol, all the presents she has gathered will reappear in the maze, and she must pick them up again.

A few seconds after a stage begins, the Evil Snowman will enter the maze. His howl will warn you of his impending presence, giving you a chance to keep clear of the Pac-Man-like side tunnels where he enters. Unlike the ghost, making contact with the Evil Snowman is deadly. 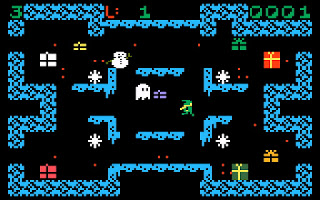 Luckily, there are magical snowflakes to help you out. When Carol eats a snowflake, the enemies temporarily become stunned (the ghost will freeze) and confused (the snowman will turn the opposite direction). For extra points, Carol can eat bon-bon candies dotting the pathways; this slows her down, but not by much. Additional points are also awarded if you collect all the presents in a level without getting caught by the snowman. This is called the Perfect Level Bonus, and it increases as you complete more stages.

Christmas Carol offers eight different non-scrolling mazes to explore: Haunted Hollow, Frosted Maze, Candy Cove, Icicle Lane, Snowflake Garden, Freezer Burn, Krystal Keep, and Twisted Toyland. The latter introduces a new enemy to the action called The Toy of Mischief 3000, a.k.a. T.O.M.BOT 3K, who has been reprogrammed by the Evil Snowman to “aid his foul deeds.” This little robot shoots Carol with lasers, slowing her down (but not killing her). As with the ghost, Carol can freeze the robot by eating a snowflake.

Craggy borders, ice cubes, icicles, and other such elements delineate the maze pathways, and cute intermissions play out between levels. There are humorous elements in the intermissions, such as when Carol is surprised to the point of fainting by a jack-in-the-box, and when Carol scares off the snowman with a flaming torch.

If you beat all eight levels, you rise in the ranks from Novice to Helper in Santa’s Elite Elf Squad, and the action starts again at the beginning, but is more difficult. Then you must try to beat the levels a third and a fourth time to become a Ranger and then a Master respectively, but this is very difficult to achieve. To pause the game, press "1" and "9" simultaneously, just like in the good old days.

You may not think the Intellivision control disc is the ideal device for manipulating a character around tight corners, but it works great for Christmas Carol. The title character maneuvers quickly and smoothly, but the enemies are even faster, so you’ll have to be clever, anticipate their moves, and use snowflakes wisely to make it very far into the game. One tip is to move up, down, and all around when the snowman is chasing you as this sometimes gets him off your tail.

Clearly, few corners were cut in producing this fine game, which comes packaged in a classic-style, front-flap Intellivision box with two keypad overlays, labeled cartridge, and slick, full-color manual. I wish there were a way to occasionally turn the tables on the enemies—maybe a magic elf that would appear from time to time to give Carol a candy cane weapon. I also think the enemies should slow down when they are chasing you through a tunnel (as they do in ). However, these are nitpicks in an otherwise terrific game.

If you decide to hop over to the Left Turn Only website and order a copy of Christmas Carol vs. The Ghost of Christmas Presents (who says you can’t buy a Christmas present for yourself?), you might find that you enjoy it more than such revered maze titles as  and Pac-Man. It’s simply that good.

*Also by Left Turn Only: Space Patrol, which is a spectacular  clone for the that lets you pilot your moon buggy across the Moon, Mercury, Mars, and Pluto.
Posted by Brett at 7:53 AM

This is James Pujals, programmer of the Christmas Carol game. Thank you for the glaring review, I am honoured and humbled by your nice words, and I am really glad you've enjoyed it.

By the way, there is indeed a "pause" function in the game: just press "1" & "9" on the keypad simultaneously, just like in the good old days. As for turning the tables on the enemies, I'll consider that for my next game. :)

Also, I wanted to let you know that we're running the 4th annual Carol vs. The World high score championship throughout the month of December. It's free, no registration or purchase is needed, and the game can be played on cartridge or emulation using the ROM available for free from the official web site. Plus there are great prizes!

For more information on the contest, please visit the CvW Championship web site at:
http://www.CarolVsGhost.com/cvw2015.

Thanks again for the nice review and Merry Christmas!
- j.

Thanks for your comments, James! I made the correction to reflect that the game does indeed have a pause feature! MERRY CHRISTMAS!!!