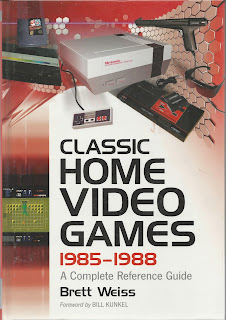 A recent Facebook thread about all the recently published and forthcoming Nintendo NES books got me thinking about something I hadn't really thought about in a long time. My second book, Classic Home Video Games 1985-1988, originally published in 2009, was the FIRST to feature write-ups for every single U.S. release for the NES console. Since the cover dates refer to when the consoles were released, the book also includes every game for the Atari 7800 and Sega Master System, another first. (The Digital Press Collector's Guides are nice and have comprehensive listings--I still use them to track my collection--but many of the entries contain nothing but data and lack descriptions or reviews.)

A have nothing against the new NES books as the ones I've seen are very nice looking, and the more quality video game books being published the better (in this respect, the video game industry lags far behind the music, sports, and film industries, which have thousands and thousands of books). In fact, I contributed to one of the new NES books. But, and I suppose this is self-serving, I think it's noteworthy to mention that my book was the first of its type regarding the NES. You can find links to excerpts from the book HERE.

Helping pave the way for Classic Home Video Games 1985-1988 was Leonard Herman's essential ABC to the VCS, which listed, cataloged, and described every Atari 2600 game. This landmark book played a role in inspiring me to write the "Classic Home Video Games" series. I also owe a huge debt of gratitude to guys like Jeff Rovin and Ken Uston, who wrote early video game books, and to Bill Kunkel, Joyce Worley, and Arnie Katz, the first video game journalists. I remain flattered and thrilled beyond measure that the late, great Kunkel wrote the forward to my NES book, and that his wife bought a copy of my Atari book.

Working on these books is a labor of love--I make a lot more money writing articles considering the time involved in writing books--but it's been rewarding and a lot of fun, and I'm currently working on a Super Nintendo book.