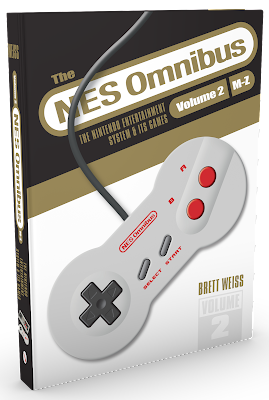 I’m super excited that the Kickstarter for my forthcoming book, The NES Omnibus: The Nintendo Entertainment System and Its Games, Volume 2 (M-Z), is getting close to $15,000. And we’ve still got 25 days to go! You can back it on Kickstarter HERE. The book, which of course is the sequel to The NES Omnibus Vol. 1 (A-L), will begin shipping October 28.

Here's an update: I’m getting ready to turn in the text edits for the book to my publisher, Schiffer, and then they will send me back the pages with the photos included in a few weeks, and I will go over those pages to edit. (I supplied the images, and the publisher is designing the pages. Mobygames was a big help in this regard.) Yeah, it’s a long, laborious process—I began the book well over a year ago—but it’s been a lot of fun. Plus, I’ve got a great team of writers, including YouTubers, authors, and programmers, providing nostalgic stories for many of the titles featured in the book.

More than 360 games are featured in the book, including such iconic titles as Metroid, Super Mario Bros., and Tetris, as well as such hidden gems and cult classics as Mighty Final Fight, Trog!, and River City Ransom. In addition to thorough gameplay descriptions, the book includes box art, screenshots, reviews, fun facts, historical data, memories from the author (that’s me), vintage magazine ads and quotes, and, as referenced above, personal anecdotes about many of the games.

Here's the anecdote for Mach Rider, a motorcycle racer:

Insider Insight: Back in college I worked at a GameStop when the company was originally phasing out the reselling of used 8-bit and 16-bit games. I took full advantage of my employee discount and snagged quite a few NES carts for a great price, one of which was Mach Rider, a game I hadn’t heard of before. Upon getting the cartridge home, though, I quickly discovered it was completely nonfunctional. My NES absolutely refused to recognize it. I tried every usual trick I knew of at that time, everything from the traditional “blowing” in the cartridge to rubbing alcohol and cotton swabs. Nothing seemed to work. Thus, Mach Rider became my first experience in “open cart surgery,” as YouTuber John Riggs calls it.

Luckily, the game was one of the “five-screw” carts from the initial run of black label titles, so I was able to open the shell with just a screwdriver. On inspection, the circuit board seemed intact, but I quickly noticed the amount of corrosion on the connector pins. I spent a few hours rummaging through our garage looking for a proper cleaning solvent (my dad was an auto mechanic back in the day) and something to scrub and scrape the connectors. I was determined to play this mysterious Nintendo game one way or another. I ended up spending a couple hours intricately cleaning the pins like an archaeologist carefully picking away in the dust to unearth some valuable ancient relic. I felt mighty proud of myself when the cartridge fired right up afterwards. - Kale Menges, Artist and Game Developer

***For those of you don’t do Kickstarter, US residents can pre-order an autographed book the old-fashioned way direct from me HERE.