Like many of my articles these days, this one about C-3PO/Anthony Daniels first appeared in AntiqueWeek.


IRVING, TX—Anthony Daniels may not be a household name, but the character he played in all six Star Wars films—the golden droid C-3PO—most certainly is. If you want to get the autograph of the “man inside the metal” and even have your picture made with him, you can do so at Dallas Comic Con: Fan Days, a geek fest being held October 4-6 at the Irving Convention Center, which is located between Dallas and Fort Worth. 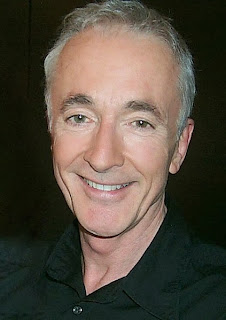 With Daniels in attendance at Fan Days, you can bet there will be numerous Star Wars items for sale, including C-3PO action figures. Many have been produced for the various films over the years, but the Holy Grail of C-3PO action figures remains the original, which was produced by Kenner in 1978, the year after Star Wars debuted in theaters. Today it is worth more than $2,000 when graded 90 or better by the Action Figure Authority (AFA). 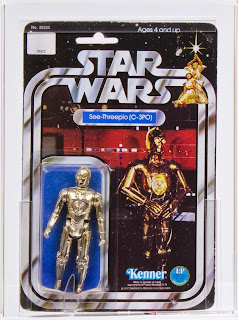 Daniels collects C-3PO merchandise, but only in the casual sense. He recently told geek-news.mtv.com he has “quite a few” C-3PO collectibles that “you wouldn’t see on display, but tucked away in a cupboard somewhere.”

Daniels also revealed that his favorite C-3PO item is as soft and as furry as an Ewok.

“The one I like very much is a Beanie Baby C-3PO, because it’s so charming,” he said. “He’s a cartoony type figure, he’s floppy, he’s cute and you can throw him at people and whatever. But I have other things and some quite expensive one-off things. I don’t know what to do with them, and one day I’ll wake up and do it.”

In Daniels’ opinion, the goofiest C-3PO collectible is a ceramic tape dispenser made by a company called Tastesetter. “It features C-3PO in the semi prone position with his knees in the air and his feet on the ground with the roll of tape between his knees and thighs,” he said. “It’s like the position of giving birth. It makes me laugh, because it’s so repellent and so dreadful.” 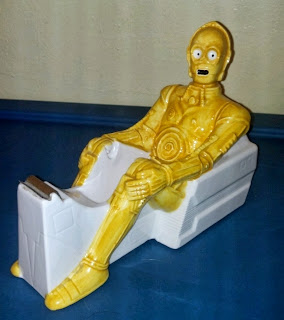 In an article called “12 Craziest Pieces Of Star Wars Merchandise” published on www.smosh.com, the C-3PO Tape Dispenser earned the dubious top spot. Despite (or because) of its crazily awkward design, the dispenser is worth more than $100 in near mint condition.

Ever since Disney announced the purchase of LucasFilm in October of 2012, speculation has run rampant on whether or not actors from the original Star Wars trilogy would appear in the next film, which is scheduled for release in 2015. If you make it out to Dallas Comic Con: Fan Days, you can ask Anthony Daniels if he will be reprising his famous role.
Posted by Brett at 10:27 PM