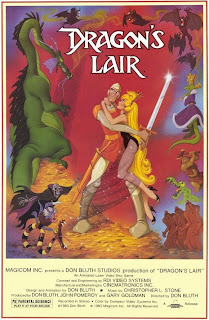 Released during the summer of 1983, Dragon’s Lair was the world’s first fully animated laser disc video game, breathing new life into the arcade industry, which was starting to lag and needed a big hit.

Unlike most other games of the time, which employed sprite-based graphics, Dragon’s Lair was essentially an interactive cartoon. Gamers, cast in the role of Dirk the Daring, set out on a journey to rescue the beautiful (and scantily clad) Princess Daphne, who was held captive in the wizard Mordroc’s castle by an evil, fire-breathing dragon named Singe.

Instead of directly controlling the action, players would watch animated sequences and intermittently press the joystick for directional movement or the button to swing Dirk’s sword at just the right moments. If the player’s timing was off, a humorous death sequence would follow.

Produced by Cinematronics, Dragon’s Lair was conceived by Rick Dyer and animated by Disney alumnus Don Bluth, director of such classic cartoon features as The Secret of NIMH (1982), An American Tail (1986), and The Land Before Time (1988).

When it was new in the arcades, Dragon’s Lair cost 50 cents to play, which was double the price of other coin-op video games. In addition, its non-traditional, quick-time gameplay was befuddling to some. However, that didn’t stop many, many people from lining up to play it. By February of 1984, the game had grossed $32 million.

Dragon’s Lair inspired such arcade offshoots and sequels as Space Ace (1984) and Dragon's Lair II: Time Warp (1991), and it spawned a surprising amount of merchandise, including action figures, comic books, magazines, and T-shirts. It’s also one of only three arcade video games housed at the Smithsonian Institution in Washington, D.C. (the other two are Pong and Pac-Man).

Syd Bolton, author of the newly released Collecting for Dragon’s Lair and Space Ace, which was published by the Personal Computer Museum to coincide with the 30th anniversary of the franchise, compared the success of the game to other pop culture icons. 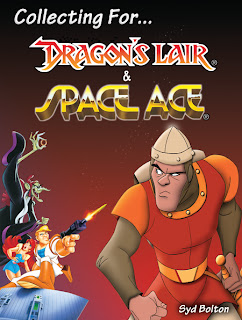 “The loyalty and nostalgia created by Dragon’s Lair is not unlike the fandom created by science fiction hits like Star Wars and Star Trek,” he said. “Virtually every year since Dragon’s Lair’s initial release, new ways to purchase the game have emerged,” including releases for such home consoles as the NES, Wii, Super Nintendo, and Sega CD.  You can even play Dragon’s Lair’s on your iPhone. 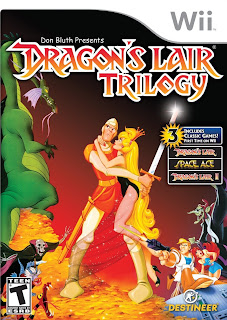 Bolton acknowledges that better, more beautifully animated games have come along since Dragon’s Lair, but there’s no denying the popularity and longevity of the adventures of Dirk the Daring and his cartoon cohorts.

“The combination of gameplay, animation, sound, and the time in it was introduced to the world is what makes the game memorable,” he said. “Certain players feel personal pride being able to complete the game, which is considered far too difficult and frustrating by some. Others just like being transported to a world with monsters and knights and treasures where anything can happen.”

According to Bolton, the Dragon’s Lair arcade cabinet is, of course, the most highly sought after Dragon’s Lair collectible, but there are two versions in particular that are especially desirable to collectors. “Dragon’s Lair serial number one, which was once owned by Don Bluth, sold at auction for $8,000 several years ago,” he said. “We can only guess at its value today.”

Bolton also referenced the Australian release of the game, which is worth $5,000 or more in working condition. “Only two are known to still exist today,” he said.

Other Dragon’s Lair collectibles of note include: original animation cels ($50-$5,000 each, depending on the scene, and whether or not the cel is autographed); the Korean version of the Panasonic 3DO game ($150); a counting target toy set ($200); the Tele-Story Presents Dragon’s Lair storybook ($150 with cassette tape); the Sega CD demo disc of the game ($100); the 2008 Blu-ray release autographed by creators Don Bluth, Rick Dyer, John Pomeroy, and Gary Goldman ($100); and How to Win at Dragon’s Lair by Laren Ferguson ($25 in good condition, $150 or more in very fine or better condition).
Posted by Brett at 8:33 PM