Free Sample Story! - Filtered Future from The Arcade and Other Strange Tales 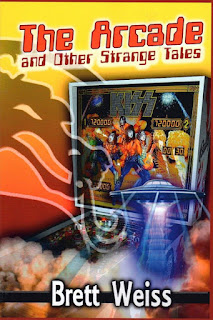 For your reading pleasure, I've posted Filtered Future, one of the short stories from my book, The Arcade and Other Strange Tales. It is sociological science fiction, meaning it extrapolates a current trend to its logical extreme. Inspired by Kurt Vonnegut’s Harrison Bergeron and George Orwell’s 1984, the story deals with political correctness, safe spaces, safety issues, and more. Enjoy!

How about those guys down in Houston? That was a close one. Those rascals at NASA are pretty bright. Ahem, were pretty bright. LOL. Anyhow, there’s a little weasel down the hall from me named Richard Hanking. I think he’s about to crack. He’s mostly just a number cruncher, but he does have some technical expertise—in college he majored in computer science and minored in engineering. And I believe he has connections at the University. Anyway, it’ll probably come to nothing, but you can never be too sure. Even the slave riots of ’32 had to start somewhere small. Let me know if you want the situation taken care of. I think I’ve still got a couple of those PolitiCor-issue suit-piercing bullets somewhere around here.

P.S. Next time you’re at PolitiCor South, say hey to Judy for me.

Mark pushed back from his desk, tired from hardly doing anything all morning. He had some virtual files to go through, but he figured they could wait until after lunch. He opened the right hand drawer of his desk, reached inside, grabbed a copy of Frankenstein and began reading about the adventures of a happy scientist and his grateful creation.
Later, during lunch, Richard barely spoke. He slurped his strained potato soup through the stretchy material covering his mouth. He told Mark he might show up at the bouncer meeting, but Mark was skeptical.
***
The following morning was Saturday, and only Mark and Richard were scheduled to work. Mark showed up a few minutes early, but noticed that Richard’s car was already in the parking lot.
Mark, thinking it odd that Richard beat him to the office, shrugged his shoulders and let himself in through the front door, locking it behind him.
Mark frowned as he went by Richard’s office. The door was open, and the light was on, but Richard wasn’t there.
Mark continued down the hallway to his office, passing by a decidedly different print of Edvard Munch’s The Scream. Beneath a clear blue sky, the figure was smiling, his teeth shining brightly.
Mark stuck his key card in the door to his office, but the lack of a beeping sound betrayed the fact that it was already unlocked. He nudged it open with his briefcase. As he stepped in, he flipped on the light. He froze in his steps.
Richard was sitting at Mark’s desk, fidgeting, squirming, looking nervous and uncomfortable in his impact suit.
“Richard! You scared the shoot out of me! What the heck are you doing in my office? Why are you sitting here in the dark?”
Larry pulled a gun from his lap and waved it in the air. “Just being nosy.”
He pointed the gun at Mark.
“Your email never made it to this Steve guy. Must’ve been a problem with the server.”
Mark laughed nervously. “Haven’t you forgotten something? My impact suit will…”
Mark suddenly recognized the gun. It was his own, taken from his locked desk drawer. And it was loaded with suit-piercing bullets.
Richard, slowly standing up, said something that sounded like “You friend! I’m going to like you. You friend!”
Beads of sweat appeared on Mark’s forehead, dampening the fabric stretched over it.
“Richard, buddy, let me explain. I didn’t mean—”
“Keep talking!” Richard seemed to say.
Mark felt as though his impact suit were shrinking a size a second. His scrotum followed. He closed his eyes and reached out as though to he could ward off the bullets with his hands.
“BANG!”
Mark heard the shots ring out, but he felt no pain. Maybe I’m in shock, he thought. Maybe Richard missed. Mark slowly opened his squinting eyes.
In his state of extreme anxiety, Mark hadn’t heard Richard’s body crashing over the desk and to the floor. Richard’s impact suit had sprung a bloody leak over the newly created hole in his forehead.
A pool of blood began to appear on the floor, a sight that Mark hadn’t seen in years, not even in the movies.
Shaking in his suit, Mark realized he had been holding his breath and let out of an audible sigh. He was relieved to be alive, but angry at his “friend” for scaring him witless.
After texting the police, Mark flipped on his computer, his busy mind already composing a new email to Steve.
While waiting for the computer to connect to the WWW, Mark mindlessly flipped through a copy of The Unabridged Friedrich Nietzsche. He settled on a single line of text, frowning. It read: “God is alive.”
Mark put his head on his desk and began to sob.
The crying sounded like laughter.

You can purchase The Arcade and Other Strange Tales HERE. The digital version is available HERE. 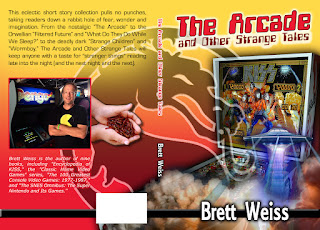