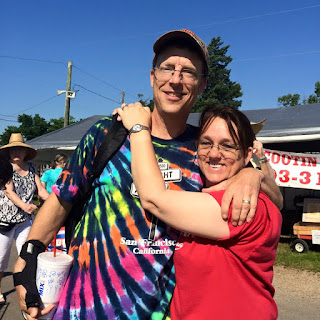 Four years ago, I went to a giant flea market called First Monday Trade Days. It is in Canton, Texas, which is about an hour east of Dallas. I met up with my cousin and other family members, made a major Atari 2600 score, and wrote about for my find for my monthly AntiqueWeek column, The Pop Culture Collective. Here's that story:

As with most collectors, I love going to flea markets. Pricing at flea markets is oftentimes higher than the typical garage sale, but the advantage is that you’ve got many sellers in one area, meaning you don’t have to keep driving from place to place, looking for more sales. Plus, many flea markets are open year-round.

The biggest flea market within driving distance of my house in Fort Worth, Texas is First Monday Trade Days in Canton, which is actually held on the Thursday through Sunday before the first Monday of each month. Spread over 100 acres with spaces for more than 6,000 vendors, it’s the largest and oldest continually operated flea market in the country.

Despite its relatively close proximity to where I live (Canton is about an hour-and-a-half from Fort Worth), I hadn’t been to First Monday Trade Days in several years, so when my sister sent a text wanting me to go with her and several family members, I jumped at the chance. 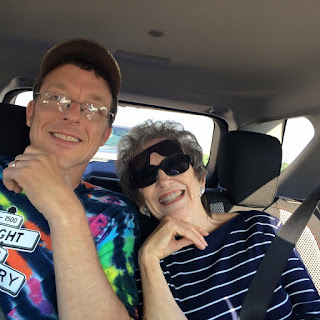 A few days before the trip, which was on a recent Saturday, I drained my PayPal account so I would have plenty of money for treasure hunting. Even in this day of convenient credit card readers for smart phones, many sellers of second-hand merchandise only take cash.

The trek to Canton was uneventful, but fun. When we arrived at First Monday Trade Days, I was blown away by it sheer scope and size—I had forgotten just how big it is. After finding a parking spot, my wife, mom (pictured in the photo), sister, and I hooked up with my cousins and aunt, who met us there.

Upon entering First Monday Trade Days—a veritable Valhalla of vintage valuables—we headed for the indoor pavilion area (not my idea), where we browsed shelves filled with new things I cared nothing about, such as decorative wooden letters, leather and denim western wear, and hand-crafted college sports team memorabilia.

It was fun catching up with the cousins, and some of the food vendors were handing out free samples (always a plus), but, after an hour or so, I was more than ready to leave the craft and clothing area for the sunny outdoors and check out the real draw—at least for me—of First Monday Trade Days: the aisles and aisles of books, comic books, magazines, toys, games, trading cards, lunch boxes, DVDs, and the like.

So off we went, in search of pop culture artifacts.

Once we were outside in the true flea market areas, I resisted the urge to run from table to table like a crazed hyena, grabbing anything that looked cool, old, and under-priced. However, even at my slow, civilized shopping pace, it only took a few minutes to fill my backpack. In short order, I found two thermoses from the 1978 Superman film for $5 each, plus eight Dr Pepper Happy Days drinking glasses in near mint condition for $4 a pop. Sticking with the Happy Days theme (by sheer coincidence), my wife happily snatched up four paperback books based on the classic TV show, priced at two for $5. I also found a number of old paperbacks in excellent condition at the same price point, including a Philip K. Dick Ace Double and a 1958 edition of Jules Verne’s Journey to the Center of the Earth. 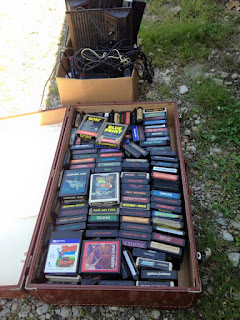 But the fun had only begun.

Just as my backpack was beginning to burst at the seams, and just as I was starting to unfold the recyclable shopping bags that my wife had wisely brought along, I spied something curious at an otherwise non-descript table. It was a large, beat-up old suitcase with the lid propped open. From my vantage point, I couldn’t make out what was inside, but there was no mistaking what was sticking out of the box sitting next to the suitcase: three vintage Atari 2600 video game consoles.

My heart skipped a beat as I excitedly approached the suitcase, hoping I would find a bunch of Atari 2600 game cartridges inside and not a pile of threadbare socks or tighty whities. As I approached the table and anxiously peered over the edge of this potential treasure chest, I was delighted to discover that it was indeed filled with Atari carts, spine-label side up. I could tell right away that there were many uncommon titles, and that there were probably more than 100 games total.

As an avid video game collector and player, especially of the older stuff, I was pumped. Finds like these were relatively common during the late 1980s and throughout the ’90s, when most people considered this stuff junk, but in these days of retro gaming mania you rarely find any pre-Nintendo games at garage sales, thrift stores, or flea markets—most end up on eBay.

Staving off the impulse to simply hand over everything my wallet, I calmly asked the vendor how much he wanted for the games. 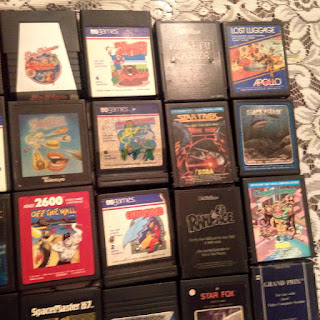 Now, two bucks is about average for a common Atari 2600 cartridge like Pac-Man, Defender, or Space Invaders. Those games were super popular back in the day, and millions were produced. However, for some of the harder-to-find games for the console, $2 was a steal, so I began rifling through the games in the suitcase, setting aside the titles I knew to be worth their weight in gold (or at least bronze).

As my pile of games grew, it occurred to me that I should just ask the seller how much he wanted for all of them, so I did. He quoted $75, including the three Atari consoles (which are worth around $60-$75 each). I countered with $50. He offered to meet me in the “middle” with $60, which I gladly accepted. 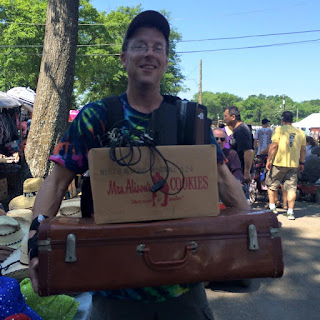 With my backpack already full and my newly acquired Atari stash cumbersome to carry, it was time to trek back to the car, dump the stash, and get back to buying, which is exactly what we did.

While the embarrassment of Atari riches was easily my best find of the day, the oddest acquisition I made was a bucket of 82 Smurf figurines, much to the amusement of my family. The vendor wanted a buck apiece for the plastic blue toys, but seemed happy when I offered him $40 for the lot.

“Someone earlier offered me $20,” he said. “That seemed a little low.”

Why would I want 82 Smurfs, you may be wondering? I’m not a fan of the classic cartoon, but I can package the little guys in Zip Lock baggies and sell them in four-packs for $5.95 in my antique booth back in Fort Worth. The figures are only a couple of years old, but they look great and will fit in well with the other pop culture items I offer for sale.

Speaking of my antique booth, one of the reasons I wanted to go to First Monday Trade Days in the first place was to restock the booth with sports cards. As fate would have it, I found several factory sealed boxes of Upper Deck and Topps StadiumClub baseball cards for $8 each, which was nice, but kind of sad. When I was co-owner of a comics and cards store during the baseball card speculator boom of the early 1990s, these were some of the newest, hottest cards on the market, and now here they were, covered in dust and selling for pennies on the dollar.

I talked the sports card seller down to $24 for four boxes, which is a real bargain since they will sell quickly at a buck a pack in my booth, mostly to nostalgic husbands, and to moms trying to keep their kids occupied while they shop.

All in all, it was a fun and profitable day at Canton’s First Monday Trade Days, and I’m already looking forward to a return trip, which I’ll probably make sometime this summer. Here’s hoping I’ll find another suitcase full of treasure.
Posted by Brett at 10:11 PM