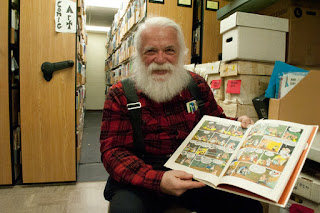 EAST LANSING, MI—Anyone who goes to the Michigan State University library can check out the prose of such literary legends as Fitzgerald, Hemingway, and Proust. They can also read the works of (Carl) Barks, (Stan) Lee and (Marv) Wolfman, writers of such four-color masterpieces as Walt Disney's Comics and Stories, The Amazing Spider-Man and The New Teen Titans (respectively).

With more than 250,000 different issues, MSU is home to the world’s largest comic book library, eclipsing even that of The Library of Congress. Further, MSU’s system is more reader-friendly than the library in our nation’s capital.

“The Library of Congress doesn’t have as many comics, but they’re working on it,” said Comic Art Bibliographer Randy Scott, who catalogs, curates, and solicits donations for MSU’s massive collection. “Our procedures can be a little intimidating—written requests, no food or drink at the tables, etc.—but The Library of Congress is more difficult to use. A few years back, they wanted requests three days in advance of use. [Editor's  note, the LOC does not currently require this waiting period.] Our pledge is to get any comic to your reading table in 60 seconds.”

A man who truly enjoys his job, Scott has been with MSU for more than four decades.

Thanks to a beloved family member, Scott began reading comic books from an early age.

“Uncle Eddie worked on the lake freighters, and when he came back from a couple of weeks on the boat, he’d bring a pile of comics,” Scott said. “This was from around 1954 to 1959. The cousins, my brother, and I would spend hours reading everything from Little Lulu to Strange Adventures. I remember reading the first issue of Superman’s Girlfriend Lois Lane [1958] in my uncle’s living room.” 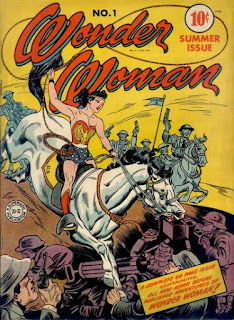 These days, Scott, who donated his personal collection to the library during the 1980s, reads a little bit of everything. “It goes in streaks,” he said. “Avengers for a couple of years. Legion of Super-Heroes. A whole decade reading westerns from Europe: Lucky Luke, Lt. Blueberry, Tex Willer. I read a lot of very small press stuff (minis) because I'm cataloging them and it’s easy to get through them. I almost always find something to enjoy.” 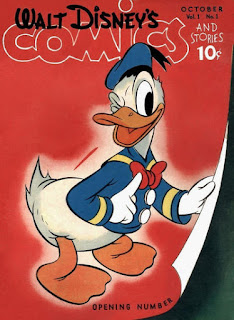 The MSU comic book collection, which MSU professor and pop culture enthusiast Russel Nye started in 1970, boasts many prized rarities, including Walt Disney’s Comics & Stories #1 (1940) and Wonder Woman #1 (1942). However, it does lack some of the most valuable comic books ever published, including Action Comics #1 (1938), Detective Comics #27 (1939), and Marvel Comics #1 (1939). Fortunately, you can read those stories in some of the library’s many reprint editions.

Scott isn’t as concerned about the monetary value of the comics as he is the cultural and literary importance of the medium.

“Comics are a literature, and like all literature they help us know ourselves,” he said. “Literature records our acts and thoughts and feelings like nothing else, and comics have their part to play.  In comics’ characteristic word-image combination, we see unique efforts to combine right and left brain perceptions, and/or visual and verbal comprehension, and we get the chance to identify with ducks and mice and galaxy-spanning surfers and stuff.  Just figuring out what makes that all so cool seems like a life’s work to me.”

Which may be explain why the library within a library is underutilized, at least relative to the fantastic wonders contained within.

“We get maybe between 5 and 20 readers per week,” Scott said. “Most of it is research, in that they’re doing it for classes. And 10 or so people per year actually come here from out of town to work on dissertations or books.”

Scott said the comics draw “recreational readers” as well, whose tastes are “all over the map,” from historical to funny animal to superhero.

Cynics may wonder why you should include comic books, which for decades were looked upon as throwaway reading for sub-literates, in the library of a university as prestigious as MSU.

Scott believes he has the answer.

“Comics have been a big fraction of American literary production since at least the mid-20th century,” he said. “We just have never counted them as part of the literature, but they are. I think if you could figure it out, by number of pages of original material produced, comics are probably a least a quarter of American literature. So why the heck wouldn’t a library collect comics?”
Posted by Brett at 10:19 PM

The Library of Congress does not require a 3 day advance request to access the comic book collection! Though it isn't a browsing collection, researchers are encouraged to come and use the collections!
http://www.loc.gov/rr/news/coll/049.html

Point taken, I'll amend or take out the quote, thanks!