Batman’s sidekick Robin debuted in 1940 in Detective Comics #38. While he was 8 years old when he debuted, he’s been around as a character for 80 years now. My, how time flies when you’re galivanting about Gotham, combating crime! 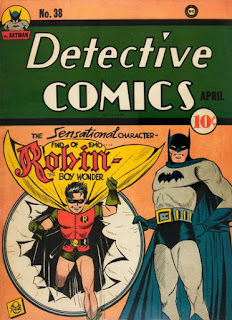 In that legendary first appearance, The Flying Graysons, comprised of young Dick Grayson and his father and mother, are putting on a high-flying trapeze act in a small town outside of Gotham City. During a particularly dangerous act—the triple spin—Dick watches from below as his parents “fly through the air with the greatest of ease.” But then the ropes snap, and they plunge to their death, much to their son’s horror. Gangsters running a protection racket had put acid on the ropes as the circus owner refused to pay for said protection. 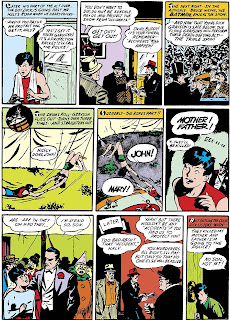 Watching from the audience is Bruce Wayne, who, as Batman, confronts young Grayson after the accident and warns him not to go to the police because the town is run by Boss Zucco, and he would be dead inside of an hour if he told the cops. Bruce takes Grayson into his home as his ward, has him swear an oath to fight crime and stay on the path of righteousness, and trains him in boxing, jujutsu, and other such disciplines. Grayson is already a trained circus acrobat, so he’s a quick study. And, poof, a superhero sidekick his born!

The story was written by Batman co-creator Bob Finger (who didn’t get sufficient credit for his Batman work for many years), the pencils were by Batman’s more famous co-creator Bob Kane (who would often claim sole credit as Batman and Robin’s sole creator), and the inks were provided by Jerry Robinson.

In an old interview with Finger, who passed away in 1974, the scribe revealed the inspiration behind the boy sidekick. “Robin was an outgrowth of a conversation I had with Bob,” he said. “Batman was a combination of Douglas Fairbanks and Sherlock Holmes. Holmes had his Watson. The thing that bothered me was that Batman didn't have anyone to talk to, and it got a little tiresome always having him thinking. I found that as I went along Batman needed a Watson to talk to. That's how Robin came to be. Bob called me over and said he was going to put a boy in the strip to identify with Batman. I thought it was a great idea.”

The debut Robin story is primitively and quickly told (obviously, you can’t simply take a child you don’t know home from the circus right on the spot, even if their parents get killed), and the art is crude compared to something like Hal Foster’s work on Prince Valiant, the adventure strip that debuted in newspapers the previous year. However, there’s a lot of energy on the pages, and the fast pacing makes for a fun read. Despite his youth and inexperience, Robin goes into action solo against some bad guys and gets the best of them. Like Batman, Robin has a utility belt and fights crime sans superpowers.

As the story closes, we see our heroes engaged in this cornball exchange:

Bruce: “Okay, you reckless young squirt, I ought to whale you for jumping those men alone. Why didn’t you wait for me?” 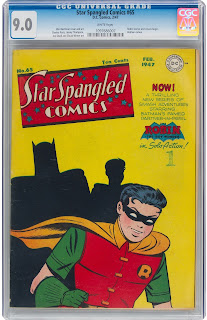 A trailblazer, Robin started a trend in comics of superheroes having sidekicks, such as Captain America’s Bucky, Aquaman’s Aqualad, and Flash’s Kid Flash. Thanks to his decades-long pairing with Batman (they are often called the “Dynamic Duo” or the “Caped Crusaders”), and his presence in such shows as the Adam West Batman (where he was played by Burt Ward) and the Saturday morning cartoon The Super Friends (where he was voiced by Casey Kasem), he’s also become one of the most famous superheroes of all time. Tons of merchandise, including multiple action figures by an assortment of companies, adds to Robin’s pop culture legacy as well. 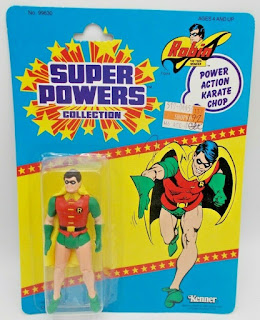 When Batman debuted, he was a grim, darkly clad avenger who brandished a firearm instead of a partner in crimefighting. (Batman later swore off guns.) The brightly colored Robin, who was inspired in part by Robin Hood, changed that dynamic (so to speak), giving kids a spunky young hero they could relate to.

“On his own, the Batman of 1939 was a pretty dark character, a loner in the night,” says comic book writer Paul Kupperberg, a former editor for DC Comics. “Early on, he sometimes carried a gun and would use it. But I think as comic books proved themselves to be largely kiddie literature, DC realized they needed to take some of the edge off the character. Robin was introduced to soften Batman and, even if they didn’t realize it at the time, he also gave the kid readers an ‘in’ to the stories, a character they could identify with other than this harsh guy dressed in black and gray. As soon as Robin came in, the tone of the stories changed, giving the strip a sense of familiar domesticity.”

Though Batman did appear in solo stories, such as when Dick Grayson when off to college (Batman #217), the original Dick Grayson version of Robin remained a steady presence in various Batman titles and other DC-published comic books for decades. Robin helped form the Teen Titans (The Brave and the Bold #60), battled the Joker, the Riddler, the Penguin, and countless other villains, teamed up with such heroes as Batgirl and Superman, and in general remained a noble, lighthearted hero. 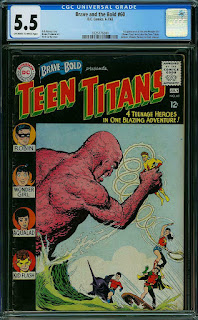 During the early 1980s, Robin grew out of his sidekick role. In the pages of The New Teen Titans, where Robin served for years as a leader of the team, he became an adult, scrapped the Robin identity, and took on the mantle of Nightwing. Like Robin, Nightwing lacked superpowers and used an assortment of gadgets for fighting crime, but Nightwing’s darker costume and more serious demeanor were in stark contrast to Robin. Created by writer Marv Wolfman and artist George Pérez, Grayson’s Nightwing persona debuted in Tales of the Teen Titans #44 (July, 1984), an issue worth more than $100 if graded 9.6 by CGC. Copies graded at 9.8 have sold for more than $500. Unslabbed examples in excellent condition can be found for as little as $50 or $60. 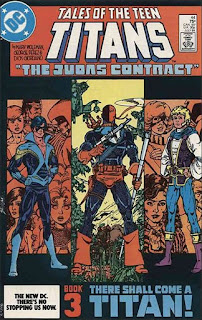 Kupperberg says he’s “not necessarily a fan” of Nightwing, but he certainly understood the reasoning behind the creation of the character.

“The way the market and audience had evolved, adult characters could stay unchanged at an indeterminate age forever,” he says. “Kid characters had to grow-up, otherwise they were just eternally whining trip-hazards for the heroes. Robin, being the first, had to catch up with the rest of the kids, especially with what was going on in Teen Titans.”

Various Robins followed in the wake of Dick Grayson maturing into Nightwing, including Jason Todd, who was memorably (if temporarily) killed off by the Joker in a marketing stunt, Tim Drake, who received a long ongoing series of his own, Stephanie Brown, the daughter of minor Batman rogue the Cluemaster, and Damian Wayne, the son of Bruce Wayne and Talia al Ghul There was even a “Robin War” storyline that ran through several DC titles published a few years ago.

Despite all those replacement Robins, for many fans and creators Dick Grayson will always be Batman’s one and only true sidekick.

Kupperberg agrees with this sentiment. “I think Robin’s legacy is as the first kid sidekick and one of the leaders of the next generation of heroes,” he says. “When it comes to my DC comic book characters, I'm an originalist. They can put whoever they want in those costumes and call them the ‘Spectre,’ ‘Batman, or ‘Robin’ or whoever, but they're not. As far as I'm concerned, Jim Corrigan is the Specrtre. Bruce Wayne is the Batman. And Dick Grayson is the Robin. Theirs are the real stories; the ones featuring these Johnnys-came-later secret identities are the fiction.” 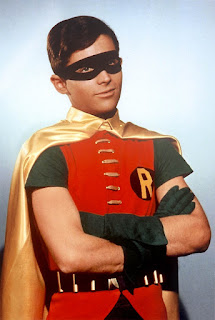