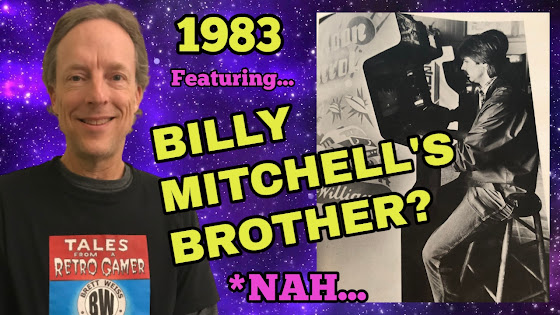 I recently uploaded a video about a cool gaming find my wife made in an unlikely place. I show off my find as well, and read a fascinating article about video games from 1983. When I posted a link to that video on Facebook, a “Top Fan” of my FB page named Keith Maldonado left a great comment: a story of how he got his first video game console. I’ve reprinted that story here—ENJOY!

Great video! I’m really cracking up at the article’s author…Particularly when he called video games a waste of money! My mother thought the same thing back in 1982. I had wanted a console system pretty much since Atari introduced its 2600 in 1977. Well, my mother wanted to go shopping at Coronado Center in Abq NM, but knew I would be quite bored. I told her that I could keep myself busy with a mere dollar. She didn’t believe me BUT my grandmother took me up on it and gave me the dollar, which came with the lecture from my mother about asking for more money. Well, I had mastered Joust, which had been out a couple months at this point. Well, I spent only one quarter and was still playing when my mom and grandma came looking for me. I was on the game of my life that day! I had put away a few million points and had an unknown number of spare “lives” still to go. Anyway, when my mother discovered I had been entertained for hours on ONE quarter, she changed her mind on home video game consoles. She offered to get me that Atari 2600 (finally!) for Christmas! Well, it got better because we were watching television and lo and behold, Coleco advertised its new system, the ColecoVision! She asked if I’d rather have that. Totally jumped on that (because in the ad, they mentioned an expansion that played 2600 carts… win win)! That’s how I ultimately got my first home console! …no waste of money there! Mom even bought me a cartridge a month and I soon got a paper route to continue more purchases on my own!