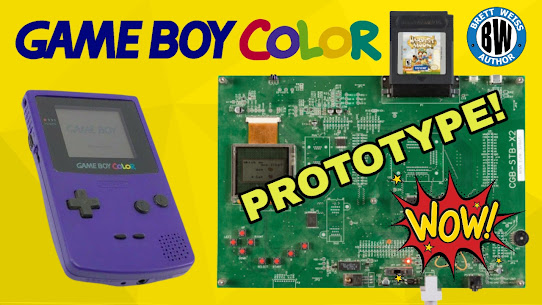 Earlier this year, Heritage Auctions sold a rare Game Boy Color prototype for a whopping $14,400. I actually got a chance to watch the system in action, with someone playing Tetris on it. You can check out my video HERE.

And here’s the auction write-up from Heritage, describing this incredibly cool item:

This is certainly something you don't see every day. A complete prototype board, not for a game, but for Nintendo's iconic "Game Boy Color" system.

Units like this were sent to developers and game publishers for the purpose of testing their games. It was necessary to get the hardware for Nintendo's new system into the hands of developers before its official launch. The unit contains all of the main components of the Game Boy Color system, giving this board full functionality. It includes all the features you'd expect on a handheld system - including a screen, speaker, volume control, IR sensor, and microswitch buttons. For power, the system uses a standard Super Nintendo power cord rather than AA-batteries. We can confirm that the unit functions properly. There's no cooler way to play Tetris than on this! And, yes, we have played Tetris (and Harvest Moon) on it because this prototype is fully functional.

The board sports a "NOA", likely "Nintendo of America", product number. Additionally, the board is labeled as "CGB-STB-X2". This follows Nintendo's standard "CGB" naming convention for Game Boy Color systems, games, and accessories. A very similar Game Boy Advance prototype system does exist\. Its product code of "AGB-STB-03" follows the same format as this Game Boy Color prototype.