A New Review of Both Volumes of The SNES Omnibus: The Super Nintendo and Its Games

One of the longest reviews ever written about any of my books popped up on Amazon recently. Very thorough. Here it is: 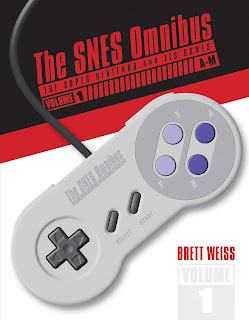 A Review of The SNES Omnibus: The Super Nintendo and Its Games, Vol. 1 (A-M) and Volume 2.

BrettWeiss has done a great service for the classic gaming community, not only in his earlier work writing for the All Game Guide and other publications, but most recently in his creation of both volumes of the SNES Omnibus. Weiss’ two volumes of the omnibus include and A-Z approach to listing all of the published SNES games released, with A-M appearing in the first volume and N-Z in the second volume. I would highly recommend both volumes for the personal libraries of classic gamers, as well as for reading material for those who are new to the classic gaming scene. In addition, the variety of materials included is a helpful representation of the classic gaming community, so those interested in the discourse community of classic gamers as a whole will highly benefit from reviewing these texts. In this review, I will review the general structure and content of the omnibus, briefly beginning with the material included in the front matter, then discussing the the structure of the entries themselves, and finally the back matter. 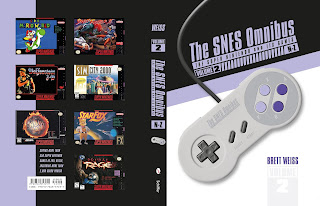 The front matters provide a fascinating review of how these materials came to be, and how we might appreciate the contributions of the teams that developed both volumes. The foreword in volume 1 is provided by Bill Loguidice, the producer of the documentary Gameplay: The Story of the Videogame Revolution. Loguidice provides a technical breakdown of the SNES and discusses the affordances of the system and how it relates to the designers’ intents for releasing a system that at the time represented the cutting edge of 16-bit game systems. Weiss then includes a preface that overviews how he got into writing about video games and how he assembled the group that contributed to the writing. For volume 2, Weiss again writes the preface, this time more briefly. This time around, however, Ben Reeves, the senior editor for Game Informer, pens the foreword. Reeves notes that compared to the competition, the SNES was actually “underpowered” in terms of processor—though the production team made specific use of the system’s technological constrains with respect to music and visuals.

Structure of the Entries 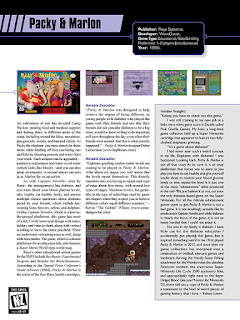 Each entry in the omnibus includes the selected game, publisher information, selected box art and scenes from gameplay, a summary of the game’s story, and a fun-fact about the game or the game’s production. Also included is contributor information from developers or players commenting on their experiences playing or purchasing the game. Much of the game summary helps the reader to understand play mechanics. For instance, for the “Illusion of Gaia” entry in the first volume, Weiss notes that the protagonist “Will must converse with townsfolk to gather clues, solve puzzles (by flipping switches, moving blocks and the like), dash quickly to smash obstacles and climb steep hills, slide through narrow openings or into foes, collect jewels to trade for items and powers, and destroy monsters to garner extra hit points, strength, lives, and defense.” The insider insight for this game was written by Kris Randazzo, who notes that the promoters of Illusion of Gaia framed the promotional materials to trick players into thinking the game was another in the Zelda series, which led to better sales for the title. For the game “Home Improvement,” based on the TV show, I appreciate the inclusion of the fact that the original game did not include an instruction manual: “There’s no true instruction manual for Home Improvement. Rather, it has a fake manual with a sticker plastered over it claiming, ‘Real men don’t need instructions.’” Funnily enough, this makes the omnibus’ entry more extensive as to the controls and story of the game than the original game’s in-box materials. 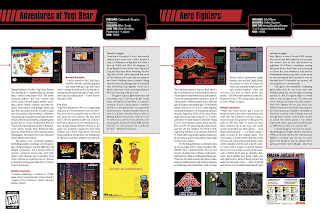 At the conclusion of the omnibus entries, each volume includes several essays written by contributors on topics of significance to the classic gaming community. The first volume includes an essay titled “The Console Wars” by Rusel DeMaria that describes that role of the SNES in the 1990s market-place conflict between Nintendo and Sega. The writer’s personal interview with Minoru Arakawa, the then-president of Sega of America, offers insights into the conflict. In “Emulating the Super Nintendo,” Alex McCumbers provides four points of consideration for video game emulation, that emulation is not new, that it is too simple to call all emulation illegal, that emulation benefits the industry, and that emulation provides an educational benefit. While I appreciate the sentiment of these points, I would have preferred to see Nintendo and the other members of the industry have their legal perspective included here: Nintendo has been very clearly and staunchly not an advocate of unauthorized fan emulation as well as being strong protectors of their IP. These positions on emulation while not being popular in the classic gaming community are directly responsible for the creation of the gaming industry that creates the games the community so much appreciates. A more balanced perspective that invited a representative from the industry would have useful and interesting as a counterpoint.

Volume 2 also includes essays that alone may be worth the price of admission. ZoeHoward’s essay “The Super Game Boy” provides insights into the SNES’ (perhaps) most prized library-extension-tool, allowing players to load and play early Game Boy titles on the SNES. Ken Horowitz provides an extended reflection on immersion in “A Deeper Meaning for Super Metroid,” discussing how the title creates mood and atmosphere in its 16-bit virtual environment. Ah, Super Metroid—you were such a cinematic and ludic joy to play—but I digress. Finally, Michael Thomasson gives an expose of “The Super Scope 6” and Nintendo’s promotion of the peripheral and other gamic guns. 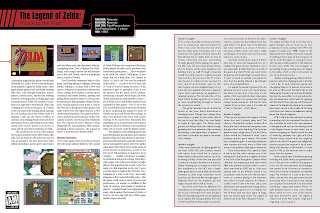 My only real complaint about the entries is that I was not invited to provide insider insight for any of the games! Aside from that, and more seriously, the entry list is extensive and reading about other players’ and collectors’ experiences with the SNES library brought back a nostalgia for me that, outside of watching reruns of the Angry Video Game Nerd and the Gaming Historian, often stays cuddled beneath the surface and thinly caked veneer of modern life. And given the extensiveness of the SNES library, I enjoyed reading about games that I never got a chance to experience, rent, collect, or play back in the day. While the collector market for video games has exploded in recent years, leading to ballooning costs for retro games (perhaps best represented by sites such as pricecharting.com), the entries in this omnibus would most certainly be of benefit for the SNES collector who encounters a flea-market bargain but does not have ready access to information about the titles.

The price tag for each volume of the SNES Omnibus sits at $49.99 (US), so that snagging both volumes will put the collector at a little over a hundred dollars for both, after tax. But it is worth it--I cannot think of a single collection that offers this much nostalgia for the price, with respect to the reviews, box and screen art, insights and reflections, and contributor essays. These volumes are both a ready and welcome addition to bookshelves and coffee tables of collectors in the SNES classic gaming community.
Posted by Brett at 10:37 PM