The Nintendo Entertainment System (NES) - One of the Greatest Consoles of All Time & One of My Favorites! 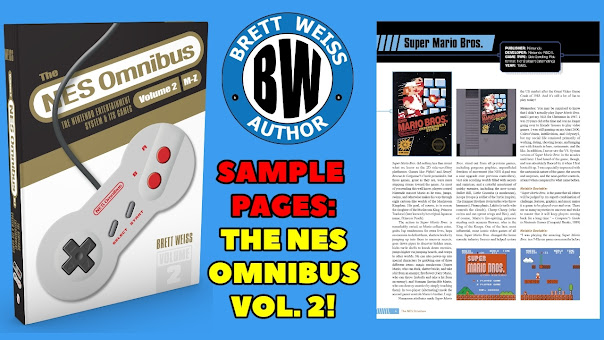 The NES is one of the greatest game consoles of all time, home to such legendary titles as Contra, Castlevania, the original Super Mario Bros. trilogy, Metroid, The Legend of Zelda, and the classic Donkey Kong trilogy (Donkey Kong 3 is so underrated!), as well as such hidden gems as Trog!, Cowboy Kid, and Felix the Cat. I could go on all day about the excellent library of games, which I in fact do in The NES Omnibus volumes 1 and 2.

The NES Omnibus: The Nintendo Entertainment System and Its Games, Volume 2 (M-Z) is currently on Kickstarter, and you can back it HERE. There are only a couple of days left, so if you miss it, you can still do a standard pre-order for the book HERE. And you can read sample pages from the book HERE.

You may be surprised to know that I didn’t actually play the NES until I got my console for Christmas in 1987. I was 20 years old at the time and was no longer going over to friends’ houses to play video games. I was still gaming on my Atari 2600, ColecoVision, Intellivision, and Odyssey2, but my social life consisting primarily of working, dating, shooting hoops, and hanging out with friends in bars, restaurants, and the like. In addition, I never saw the VS. System version of Super Mario Bros. in the arcades until later. I had heard of the game, though, and was absolutely floored by it when I first booted it up. I was especially impressed with the cartoonish nature of the game, the secrets and surprises, and the near-perfect controls, at least when compared to what came before.

I went on to amass an awesome collection of games, and I’ve written about the NES for the late, lamented All Game Guide, Old School Gamer Magazine, AntiqueWeek, and various other publications. I even wrote the WORLD’S FIRST book featuring write-ups for EVERY U.S. release for the console.

In short, I’m a huge NES fan, and I love playing the games and writing about them and the system.