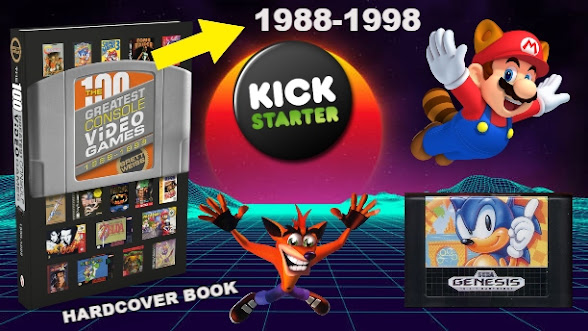 My forthcoming book, The 100 Greatest Console Video Games: 1988-1998, features essays on some of the most amazing games of all time, including the classic Nintendo 64 first-person shooter, GoldenEye 007. A number of super talented writers contributed to the book, including Kale Menges, who wrote the GoldenEye essay.

If you enjoy the essay below and want to read 99 more in full color with tons of gorgeous images and beautiful page layout, you can back The 100 Greatest Console Video Games: 1988-1998 on Kickstarter by clicking HERE. The hardcover book will feature production histories, gameplay info, author anecdotes, screenshots, box art, vintage ads, quotes from programmers, a foreword by Chris “The Irate Gamer” Bores, and much more. Thanks for reading, and thanks for your support! 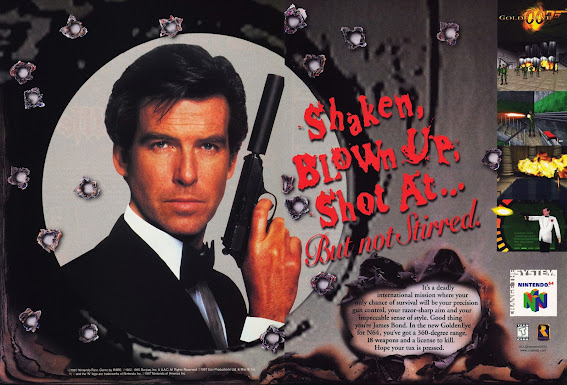 From the moment you hit the power button, you know GoldenEye 007 is special. Before a single corporate logo appears onscreen, you are presented with an official looking splash screen parodying the classic British Board of Film Classification ratings slide typically seen before theatrical presentations. It’s a simple touch, but it shows just the right amount of class before the gloves come off. There’s a crash of cymbals and a hit of brass as slickly rendered Nintendo and Rare logos appear, before a hard rock interpretation of the classic 007 anthem announces things are about to get real. Limited cartridge memory might mean no fancy full-motion video intro, but GoldenEye 007 has no need for such gimmicks. Recreating the classic James Bond rifled barrel shot, the short and sweet intro is perfectly on-point for a game that is the ultimate cocktail of secret agent action and style: shaken, not stirred. 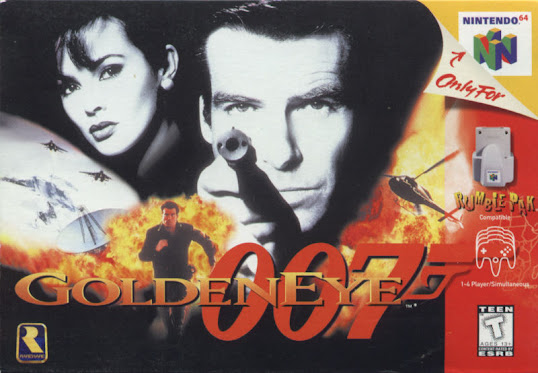 I didn’t know what to make of GoldenEye 007 as I followed its development in magazines like Nintendo Power and GamePro before the Nintendo 64’s launch. Movie-based video games had a bad reputation for being cheap cash grabs, so I wasn’t hyped for it until I finally saw it in person on a demo kiosk in a Blockbuster Video store. I only rented it once before buying a copy of my own at Toys “R” Us the same day I had to return the rental. It was an amazing first-person shooter with incredible gameplay and genuinely deep mechanics that did a great job of recreating the film it was based on, completely defying my expectations.

That said, I will forever identify this game with one of the best friends I ever had. He had a rough home life and actually ended up living with my family the last couple years of high school. It was like having a slumber party every night, and we played an unholy amount of GoldenEye 007. The game became my friend’s release from his troubles and a coping mechanism. We spent countless long nights playing it, obsessively speed-running every level to unlock all the cheats and multiplayer maps and characters, and perfecting our secret agent techniques like planting remote mines on body armor pickups (ruthless, I know). 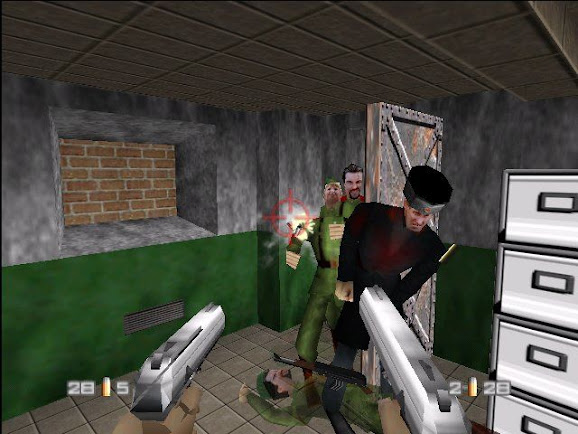 It’s only fitting that an amazing James Bond game should be developed by such a renowned British studio as Rare, Ltd. Based on the 1995 movie GoldenEye (the 17th film in the James Bond franchise), the game’s development started that same year shortly after the release of Rare’s Killer Instinct arcade title. Working with a surprisingly modest budget of around $2 million, GoldenEye 007’s development team of 11 full-time developers, led by game director Martin Hollis, was relatively inexperienced but took the challenges of developing for the notoriously complex Nintendo 64 head-on before the console’s hardware specs were even finalized. They employed Silicon Graphics Onyx workstations similar to what Rare had been using for pre-rendered CGI graphics in previous games like Donkey Kong Country and Killer Instinct.

GoldenEye 007’s first-person shooter design was initially heavily influenced by Sega’s Virtua Cop arcade game, evident in the game’s toggled targeting mode and crouching mechanics, with “on-rails” level designs actually considered early in development. Thanks to the influence of id Software’s DOOM, though, Rare went with a much more non-linear approach to level design. Most of the game’s 3D environments were actually constructed as reproductions of real-world spaces with an emphasis on practical layouts and architecture.

Game design was then layered on top of the pre-existing environments after the fact, allowing the developers to create levels with multiple paths and solutions, almost becoming playgrounds for the game’s fluid, fast-paced combat and innovative stealth mechanics (avoiding/eliminating surveillance systems, monitoring noise levels, etc.). This also made adapting the single-player levels into multiplayer arenas a much more straightforward process. Programmer Steve Ellies developed the game’s generation-defining multiplayer mode during the final six months of development, with most of the team spending their nights and weekends play-testing relentlessly. After two-and-a-half years of development time, the cartridge was finally released to near-universal acclaim on August 25, 1997.

GoldenEye 007’s single-player campaign closely follows the plot of the movie. James Bond is on a mission to tie up loose ends from the Cold War with Soviet relics and double agents, traveling across Russia from a top-secret satellite base in Siberia to a harrowing car chase with a tank through downtown Moscow and eventually to a hidden nuclear weapons facility in Cuba where he must confront a longtime friend-turned-traitor to prevent a global catastrophe. The game’s visually detailed levels are excellent recreations of the film’s various locations and sets, capturing its look and feel in a way never really achieved in a movie-based game up to that point.

Using 007’s wristwatch as the in-game UI for menus and health gauge was a stroke of genius that seriously enhances the sense of being James Bond, really nailing the gadget aspect of the secret agent fantasy. The visual effects are also impressive, with nicely animated explosions and smoke, muzzle flashes, and all manner of small bits of polish like bullet holes that smolder for a moment after impact. The various animations for enemy characters are well done, too, with location-specific hurt reactions and death animations that are entertaining and also provide meaningful feedback to the player.

The character models themselves, unfortunately, are where a great deal of optimization was required to ensure the game’s phenomenal four-player split screen multiplayer mode ran well (nearly every character in the single-player game is playable in multiplayer). While the faces of the main characters are indeed texture mapped with the likenesses of Pierce Brosnan, Sean Bean, and other stars (even classic Bond villains like Jaws and Oddjob are playable in multiplayer), the character polygon counts and texture resolution aren’t exactly the best the system has to offer, but they get the job done. 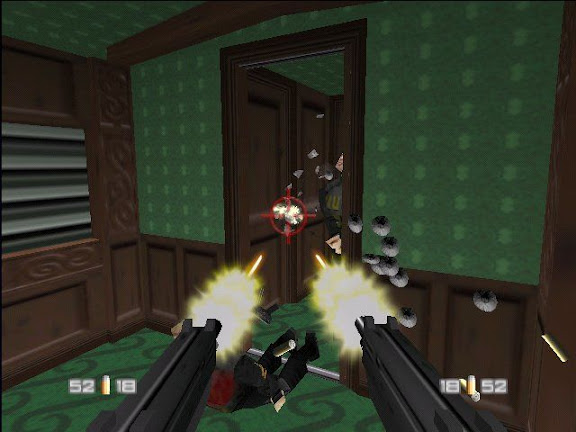 The audio actually outshines the visuals, with outstanding ambient sounds, gunfire, and explosion effects throughout, though the cartridge’s limited memory capacity does mean there are virtually no voices in the game. GoldenEye 007’s soundtrack, primarily composed by Rare veterans Graeme Norgate (Blast Corps) and Grant Kirkhope (Donkey Kong Country 2), is an electronic reimagining of classic Bond themes that is both iconic and modern. It mixes MIDI brass and rock guitars and ranks among the best the Nintendo 64 has to offer.

Fully embracing the N64’s unique controller, the intuitive play control and straightforward setup make it a breeze to get into. Playing through the single-player campaign is training for multiplayer, rewarding gamers by unlocking bonus characters and various cheat modes. “DK” mode gives all the characters gigantic heads and arms parodying the simian characters of the Donkey Kong Country games, and the “paintball” mode is actually a tongue-in-cheek jab at Nintendo’s then fairly strict policies on violence in games.

With over eight million copies sold and grossing more than $250 million in revenue worldwide, GoldenEye 007 is the third best-selling Nintendo 64 cartridge of all time, according to the Entertainment Software Association. The game was awarded the prestigious BAFTA “Game of the Year” award in 1998, and received several awards from the Academy of Interactive Arts and Sciences including “Interactive Title of the Year” and “Console Game of the Year.”

Despite its popularity and commercial success, licensing issues between various copyright holders have prevented any legitimate rereleases of the game. Ultimately, though, GoldenEye 007 will always be remembered for the way its multiplayer content reshaped console gaming at large. The incredible depth and variety offered through the game’s customization settings and cheat options in multiplayer, though, is something that few games since have come close to achieving, and gives GoldenEye 007 limitless replay value that has immortalized it as one of the crown jewels of the Nintendo 64 library and one of the greatest titles of a generation.

Rare originally created character models of all four actors to have portrayed James Bond up to GoldenEye’s release—Sean Connery, Roger Moore, Timothy Dalton, and Pierce Brosnan—for the game’s multiplayer mode, but Sean Connery declined to license his likeness for the game. The additional character models were ultimately disabled for the shipped version of the game, but the finished art assets are actually still stored intact on the game cartridge!

Every bit as suave and sophisticated as James Bond himself, GoldenEye 007 proved first-person shooters could thrive on home systems, redefining what was possible for multiplayer console games in the process.