In 2012, I wrote an article for AntiqueWeek about the movie version of James Bond turning 50. Since the new Bond film—Spectre starring Daniel Craig—is now in theaters, I thought I'd reprint the piece here for your perusal. Enjoy! 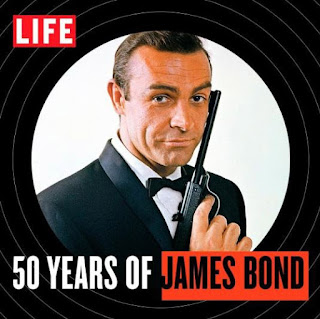 For a man who’s half-a-century old and made of celluloid, British Secret Service agent James Bond—code name 007—is still daring, dashing, and debonair, thrilling filmgoers with his cool cars, his sci-fi gadgetry, his rugged good looks, and the smooth, sexy way he handles both criminals and the ladies (who are sometimes one in the same).

Dr. No, the first Bond movie, debuted in theaters Oct. 5, 1962. It starred Sean Connery as the now-famous super-spy, Ursula Andress as the bikini-clad Honey Rider (said bikini sold at auction in 2001 for $61,500), and Joseph Wiseman as the villainous Dr. Julius No, who schemed to thwart an American manned space launch with a radio beam weapon. 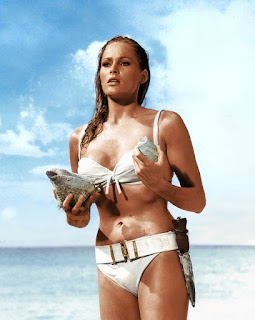 Based on the 1958 novel of the same name, Dr. No was a low-budget affair, costing just over $1 million to produce, but it grossed nearly $60 million worldwide. Moreover, the film kick-started an iconic film franchise that has grossed more than $5 billion, second only to the Harry Potter series ($7.7 billion).

After Connery played Bond in five more films (plus a one-off by George Lazenby in 1969’s On Her Majesty's Secret Service), an assortment of actors followed, including Roger Moore (who portrayed the character in seven films, the most of any actor), Timothy Dalton (A View to a Kill, The Living Daylights, Licence to Kill), Pierce Brosnan (Goldeneye, Tomorrow Never Dies, The World Is Not Enough, Die Another Day) and, currently, Daniel Craig, who will appear in Skyfall, set for release Nov. 9. Including Skyfall, there have been a total of 23 James Bond films. 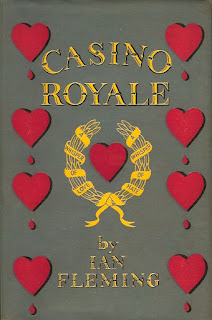 As any real Bond fan knows, the character debuted in 1953 in Casino Royale (adapted for the screen three times, including the 2006 film starring Daniel Craig), a novel written by Ian Fleming and published by British publishing house Jonathan Cape. The English author would go on to pen 11 more Bond novels (two of which were published posthumously) and two short story collections.

According to James M. Pickard, one of the world's foremost dealers in fine and rare Ian Fleming books, a first edition, first issue hardcover of Casino Royale in near mint condition is worth £24,000 ($29,615). Only 4,728 copies were produced, around half of those sent straight to the library system, making near mint copies very hard to find.

As Fleming and his creation grew in popularity, print runs rose (Fleming’s last Bond novel, The Man with the Golden Gun, had a first edition, first issue print run of 82,000), meaning later books in the series are easier to come by and are more affordable. Collecting an entire run of first edition Ian Fleming James Bond books in hardcover would cost the collector tens of thousands of dollars, but, according to Pickard, a complete set of near mint first edition paperbacks would “only” set the buyer back around £7,500 ($9,255).

After Fleming’s death in 1964, other writers wrote authorized Bond novels, including Kingsley Amis, Raymond Benson, Jeffery Deaver, Sebastian Faulks, and Christopher Wood. According to Pickard, the most collectible of these is John Gardner’s Goldeneye novelization (1995), which is worth approximately £1,500 ($1,851).

As with most collectibles, Bond books in lesser condition sell for far less than near mint copies. Also important in assessing value is where you look. For example, as of this writing, Amazon lists two very good copies of the Goldeneye novelization for less than $100 each, a far cry from Pickard’s near mint pricing.

According to the Ian Fleming estate, William Boyd, author of Any Human Heart and Restless, is currently working on a new Bond novel to be released in the fall of 2013. In addition, production of a 24th Bond film has been confirmed, slated for release in the fall of 2014.

While cinematic James Bond turns 50 this year and his literary counterpart turns 60 in 2013, the character may be graying at the temples a bit, but he remains forever young—and highly collectible—thanks to a host of talented actors and writers, and to a devoted fan base that keeps the character in high demand onscreen and in print.