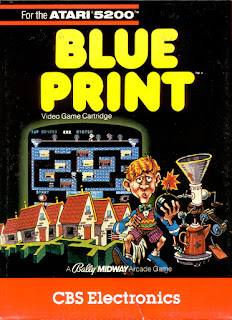 The nasty old troll, Ollie Ogre, is once again terrorizing a peaceful community in the maze game, Blueprint. This time he's chasing Daisy Damsel. Therefore, with blueprint in hand, it's up to you to build a contraption to knock off that pesky creature. However, weapon parts are hidden in bomb-laden houses throughout the neighborhood, and you're on a time limit.

A neighborhood in this game consists of ten houses, eight containing parts and two containing bombs. To advance to the next neighborhood, you must find all the parts (one at a time), position them in their proper places on the blueprint (a rectangle at the bottom of the screen), and use the completed device to thwart Ollie and rescue Daisy. If you pick up a bomb instead of a part, you must defuse it in a hurry by hauling it to the monster pit at the bottom right side of the screen.

In addition to bombs, you must concern yourself with Sneaky Pete, the neighborhood nerd who lives in the bomb pit. He'll surface from time to time to push a start button at the lower left portion of the screen that will slip your parts off the blueprint. In level three, you'll be harassed by Fuzzy Wuzzy, a vengeful fellow whose advances were once spurned by Daisy. In all the levels, as Ollie relentlessly pursues Daisy across the top of the screen, he will sometimes knock flowerpots off the ledge. When a flowerpot hits bottom, it will grow feet and bounce your way.

Once you complete your contraption, a warning signal will sound, alerting you that it's time to rescue Daisy. So, push the onscreen start button to activate the device allowing you to fire basketballs at Ollie as you maneuver horizontally along the lower portion of the screen. One lucky or skillful shot will knock Ollie on his duff. Begin Blueprint with five lives and gain a new one when you score 20,000 points. Choose from seven skill levels.

When I first played Blueprint for the Atari 5200 back in the day, I had no idea what to expect. I had never played (or even heard of) the arcade version. With a name like Blueprint, the game seemed like some kind of needlessly complicated strategy contest or an esoteric simulation of some sort. In short, I was prepared to be utterly bored. Much to my delight, I discovered that Blueprint is a maze game, a very strange and original one at that. And while some of my favorite games are dot-munchers (Ms. Pac-Man and Lady Bug come to mind), I found it refreshing to play something different.

One interesting aspect of Blueprint is that it forces you to use your memory. This is unusual for a maze game. A crucial aspect of gameplay is remembering which of the ten houses you entered. This may sound easy, but when the action gets hot and heavy, it's easy to forget, especially when you're down to one or two more pieces of the contraption. With the help of the pause button, you could cheat and slap stickers on the TV screen to indicate which houses you've been in, but you wouldn't want to do that, would you? Another plus is the strategy. You can speed up and slow down at will, and a speed indicator monitors how much speed you've used. This lets you cruise quickly when trying to get rid of a bomb or dodge an enemy, while letting you save energy when you're walking around the maze unencumbered. I haven't even mentioned the clever onscreen start button and monster pit!

By now, you probably think I'm crazy about Blueprint and would recommend it. Unfortunately, after playing the game for an extended period, I found enough flaws to make it one of the lesser titles in the formidable Atari 5200 library. The most annoying thing about the game is Fuzzy Wuzzy. Not only is his name stupid and unoriginal, but he also gets in the way when you're trying to get rid of a bomb or go to another part of the maze. Sure, that's his job, and a game without enemies is like a story without conflict, but he is a classic overachiever. But sometimes, no matter what you do, Fuzzy will not stray from his path and your only options are to make a suicide run or let the clock expire. This isn't challenging—it's frustrating and unfair. I like a cunning enemy as much as the next gamer, but I don't like a cheater!

Another frustrating moment occurs after you've built the basketball-shooting device. You work hard to build the contraption, but the scene in which you actually use it is much too short. All you have to do is hit Ollie Ogre a single time with a basketball -- a fast and fun, yet underutilized part of the game. Expanding this sequence would make Blueprint half maze-game and half shooter—a very cool notion.

Finally, the controls aren't precise enough, making it too easy to go into the wrong house when trying to turn a corner. Adding to the list of drawbacks are only one maze design, only one route between the right and left sides of the maze, you can't see the timer, and the game just isn't as cute or as addicting as Ms. Pac-Man, Lady Bug, or Mouse Trap.