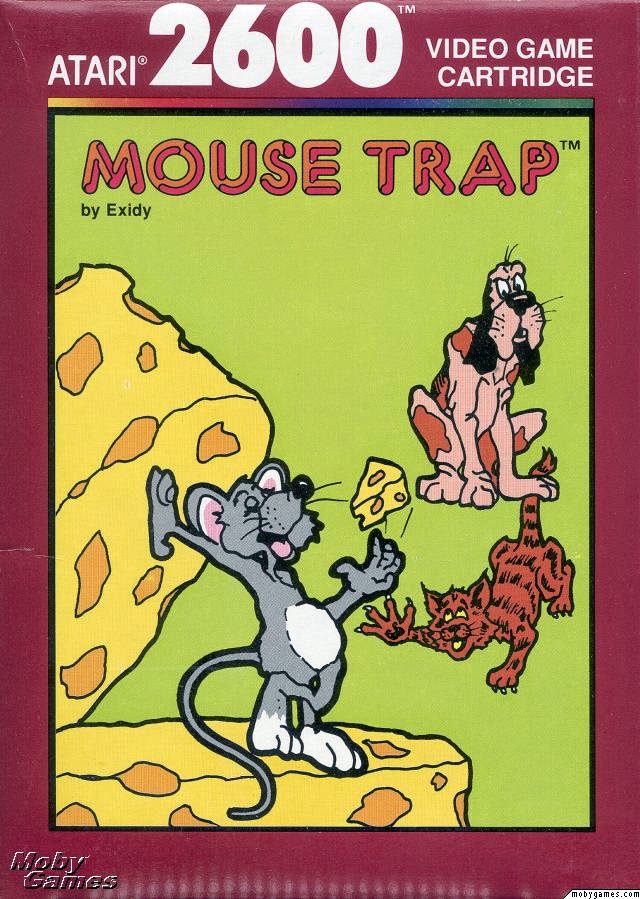 Based on the 1981 Exidy coin-op game and the ColecoVision hit, Mouse Trap for the Atari 2600 is a maze game featuring one of the oldest rivalries known to man. You are a mouse, and your enemies are cats. Your job is to maneuver around the maze, eating all of the cheese. When all of the cheese is gone, you move on to the next maze, which is the same in design.

As you gobble up cheese, cats will chase after you and try to bite you. Luckily, if you have any bones in your stockpile, you can temporarily turn the tables on your enemies by morphing into a dog. In each maze you will find four bones that you can add to your arsenal.

Situated on the walls of the maze are eight doors. With a push of the button you can open or close all of the doors simultaneously, allowing you to gain access to certain areas of the maze and close off other areas to trap the cats. 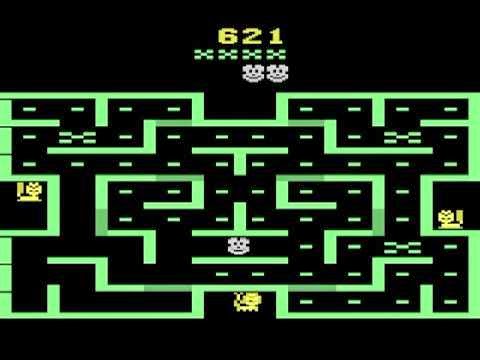 Unlike the ColecoVision and the arcade versions of the game, there are no color-coded doors, no prizes to pick up, no hawks to disrupt your pathways and no IN box to escape into. One thing this game does have that is lacking in the aforementioned versions is an option that allows you to play the game with invisible mazes.

It was surprising to see Coleco bring Mouse Trap from their ColecoVision to the Atari 2600. The most unusual aspect of Mouse Trap, whether you are playing it on the ColecoVision or at the arcade, is its system of opening and closing color-coded doors. With the Atari 2600's one-button joystick, this feat is impossible, so what we are left with is a strangely colorless version of Mouse Trap with doors that open or close in unison with the push of a single button. Even with this liability, Coleco did a nice job in bringing Mouse Trap to their strongest competitor's console.
The action may lack the color-coded door system, but it turns out that Mouse Trap is a good little maze game. It's not as exciting or as colorful as the Atari 2600 versions of Jr. Pac-Man or Ms. Pac-Man, Mouse Trap's controls and graphics are superior.

Other than the game's faded colors, the graphics are very good. The cats, mouse and dog look surprising similar to those in the ColecoVision version of the game. The music is nothing to get excited about, but the dog barking actually sounds kind of like a dog, well, barking.

One area where to fault Coleco on is the omission of the IN box. In the other versions of Mouse Trap you could enter a little rectangle in the center of the screen and instantly transport to one of the four corners of the maze. Wizard of Wor for the Atari 2600 has a similar feature that works just fine.

So, Mouse Trap is a stripped-to-the-essentials game with several features missing, but it is still fun to play.
.

OTHER VERSIONS OF MOUSE TRAP: