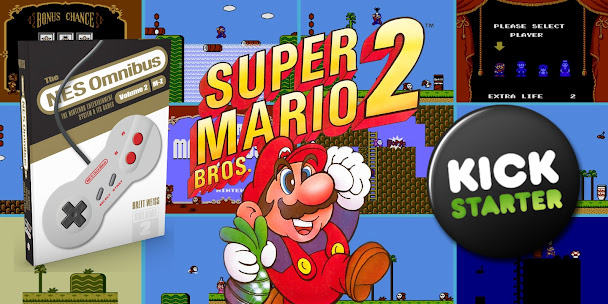 You hear a lot about video games being a waste of time—that you should be fishing or something instead of playing them. You also hear that video games are isolating and unhealthy for interpersonal relationships. What you hear far less about—at least in the mainstream press—is how video games often create lifelong bonds between friends and family members. Below is a story by writer and former GameStop associate Raymond Fix where he describes just that. It is just one of many nostalgic essays from my forthcoming book, The NES Omnibus Vol. 2 (M-Z), which is NOW ON KICKSTARTER.

Insider Insight: When I was growing up, my Uncle Peter on my mom’s side of the family came over quite often. He only lived a town away, and he seemed to enjoy having a nephew who lived so close. At the time, he and his wife Eileen didn’t have kids of their own. When the NES began gaining momentum, he bought the console and Super Mario Bros. 2. This is when our bond started to form.

On the weekends, Uncle Peter would come by, pick me up, and take me to his house so we could have a good time chomping snacks while we played Super Mario Bros. 2. We would play it all day—this was a highlight of my childhood because he always wanted to spend time with me. He showed me all the secrets he learned. He was fascinated with Peach’s floating ability and claimed she was the best. I would argue and claim Luigi was better because he jumped the highest. We had these kinds of conversations often.

I wasn’t very good at the game, so he would play the hard levels for me. Most of the time he would get all the way to Wart, which is the last boss of the game, and he would switch it to Luigi so I could battle the final boss and claim that I had beaten the entire game.

Uncle Peter passed away a few years ago. Every time I look at my collection and see that light blue end label with a red printed “Super Mario Bros. 2” written on it, I think of him and all the great times we had and how much I miss him. I don’t think I’ve played the game since he passed, but I hope my children will ask me about it someday and want to play so I can relive that part of my childhood. - Raymond Fix, former GameStop associate and blogger of raysbacklogblog.wordpress.com