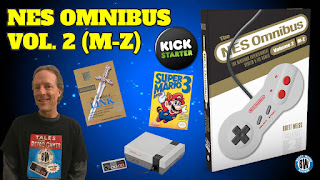 The Kickstarter for The NES Omnibus: The Nintendo Entertainment System and Its Games, Volume 2 (M-Z), a gorgeous hardcover coffee table book, is now live! Check it out by clicking HERE.

Featuring an awesome foreword by filmmaker Rob McCallum (Nintendo Quest), The NES Omnibus Vol. 2 (M-Z) completes the two-volume set begun with The NES Omnibus Vol 1(A-L), which many of you have read and let me know you enjoyed--thank you!

Like the first volume, this one will be well over 400 pages and feature more than 2,000 full-color photos. It will consist of more than 235,000 words and boast the writing of numerous industry pros and personalities who tell their nostalgic stories (some funny, some poignant, all memorable) of playing games on the classic Nintendo console.

This book takes a detailed look at EVERY U.S. release for the NES from M to Z, and each of the more than 350 games featured gets at least one full page of text and images, including gameplay synopses, history, reviews, box art, screenshots, release data, developer and publisher info, and quotes from vintage magazines. There are colorful ads from various classic magazines, and there are bonus chapters on specific aspects of the NES, as well as info on PAL, HES, and oddball miscellaneous releases. Plus, I share my memories of playing many of the games. I got my NES for Christmas in 1987 and have been playing it on a regular basis ever since!

While every game in the main section of the book is guaranteed at least one full page of coverage, a bunch of the more popular games, such as Metroid, Super Mario Bros. 2, and Zelda II, get two pages! And Super Mario Bros. is spread out over FOUR beautiful pages! Plus, the book will have a stunning centerfold featuring all your favorite NES characters by Old School Gamer Magazine illustrator Thor Thorvaldson. This is a big, durable, beautifully bound book with professional production values. Schiffer Publishing did a great job on my SNES Omnibus books and The NES Omnibus Vol. 1, and The NES Omnibus Vol. 2 is looking fantastic as well!

The Nintendo NES is one of the most iconic video game systems of all time, resurrecting the home console industry in North America during the mid-’80s and offering some of the most enjoyable and exciting gaming experiences ever created, from shooters to RPGs to platformers and beyond. This deluxe hardcover book pays considerable respect to the console many of you guys and gals grew up playing and still enjoy today. Every game, no matter how obscure or mainstream, gets the full treatment. The book is a walk down memory lane for older gamers and a great history lesson for younger folks. And it's entertaining for everyone!

In addition to writing an overview of every game in the book, I also provided a foreword detailing my history with the NES.

Every Kickstarter backer will get their name in the book as a special thank you, and there are other cool rewards for backers as well. Thanks for supporting me on this grand adventure! This is my 12th book, and I'm super excited about it!