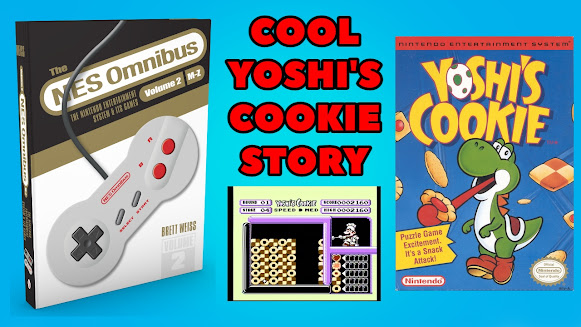 Did you know that Yoshi’s Cookie influenced the RollerCoaster Tycoon franchise? Neither did I until I read developer Matt Raithel’s Insider Insight for my forthcoming book, The NES Omnibus: The Nintendo Entertainment System and Its Games, Volume 2 (M-Z), which is NOW ON KICKSTARTER. The book features reviews, history, nostalgic stories, box art, screenshots, quotes from vintage magazines, and much more. If you like retro gaming, please consider backing the book. If you don’t do Kickstarter, US residents can pre-order a signed copy direct from me HERE.

Here’s the Yoshi’s Cookie entry for the book, with Matt’s development story at the end. Of course, the page in the book will have a much cooler design. You can check out sample pages on Kickstarter, as well as get more info. Thanks for reading, and thanks for your support!

In Yoshi’s Cookie, you use a cursor to shift horizontal rows and vertical columns of randomly sequenced cookies in a square bin. When all the cookies in a line are of the same type (heart, flower, diamond, check, circle, or Yoshi), that row or column will disappear. As play goes on, more cookies will enter the playfield from the top and the side. In one-player mode, Yoshi-shaped cookies act as wild cards, meaning they can be matched with other cookie types. In two-player split-screen mode, when you line up five Yoshis in a row, it sabotages your opponent, such as scrambling their cookies, controlling their cursor, blocking their screen, adding to your point total, or subtracting from their point total. The action moves quickly, so you’ll often pull off combos by sheer luck. Gamers can play as Mario, Yoshi, the Princess, or Bowser. With more than 100 levels (including an expert's game) in the one-player mode and an entertaining, highly competitive two-player mode, which is a race for points, Yoshi's Cookie is a solid entry in the action puzzle genre.

Notable Quotable: “Visuals are simple and clear…The music is an ever-repeating tune that can get a little annoying, but one that gets stuck in your head nonetheless. You'll find yourself whistling it at random moments. Controls are excellent…topnotch versus mode…accessible, yet challenging, addictive, and fun.” - Tom Lenting (www.defunctgames.com)

Notable Quotable: “The design may sound a bit confusing, and compared to more immediately understandable puzzlers like Tetris it does take a bit of a mental shift to wrap your head around—but you pick it up quickly after the first few rounds of play. The only real downfall to how Yoshi's Cookie is designed is that you'll often find yourself left with only one or two cookies in your stack, and you'll have to wait around for the game to spawn new pieces for you, and hope that it gives you the right ones to be able to make a match and clear the stage. That waiting period can last a while…fairly fun, but its appeal has never eclipsed those more traditional ‘falling block’ puzzlers like Tetris, Dr. Mario, or Puyo Puyo…fair and favorable…Give it a look if you're a fan of the genre looking for something that’s just a bit different.” - Lucas M. Thomas (www.ign.com), playing the NES game downloaded to the Wii

Insider Insight: I first played Yoshi’s Cookie at my cousin’s house during a family event and was immediately engaged by the unique puzzle mechanics. I connected with the fact that player movements controlled entire rows of pieces, as opposed to moving one by one. This created cascades of matches that were fun to watch and could turn a potential loss into a victory if you planned correctly.

Decades later, my team at Graphite Lab was tasked with designing a puzzle game featuring the RollerCoaster Tycoon brand for Atari. Our challenge was finding ways to make roller coaster rails a meaningful puzzle element. Reflecting on the mechanics of Yoshi’s Cookie, we imagined puzzle pieces moving a full row at a time. We evolved this approach by placing the puzzle pieces of our game on roller coaster rails. Players could drag various pieces throughout the game board in effort to make matches in a fun and unique way. Yoshi’s Cookie inspirations can now be seen through our “rail match system” found in the mobile game, RollerCoaster Tycoon Story. - Matt Raithel, Studio Director, Graphite Lab; Professor of Practice of Game Design, Maryville University