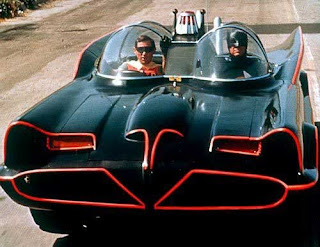 George Barris, creator of the for the 1960s television series, has passed away. As such, I've decided to post on my blog a preview article I did for AntiqueWeek a couple of years ago about the car going up for auction. It sold in January of 2013 for $4.62 million.

The original from the iconic 1960s Batman television series is going up for sale, as announced at the recent L.A. Auto Show.

Legendary car customizer George Barris, who designed the vehicle, is selling the black beauty through the Barrett-Jackson Collector Car Auction, which will take place Jan. 19th in Scottsdale, Arizona. There’s an undisclosed reserve price, but Craig Jackson, chief executive of Barrett-Jackson, expects the car to sell for millions.

“The car is true Americana,” Jackson said. “It's hard to put a dollar figure on something like that.”

The  TV series debuted as a mid-season replacement on ABC in 1966 and ran through 1968 (the show started off strong, but was eventually canceled due to low ratings), for a total of two and a half seasons and 120 episodes. The campy, colorful, star-studded show frequently found Adam West, donning his less-than-intimidating cape and cowl, driving around Gotham City in the unquestionably cool car, with Robin riding shotgun.

According to James Van Hise, author of Batmania (1989, Pioneer Books), “Producer William Dozier had originally lined up Dean Jeffries to design and build the Batmobile in 1965, but this was when  was scheduled to premiere in September of 1966. When ABC desperately needed a mid-season hit to prop up their sagging schedule, they decided to let Batman fly eight months early. This made it impossible for Jeffries to work [it] into his schedule.”

With Jeffries out of the picture, Dozier turned to Barris, “whose work had begun to garner a lot of attention by the early sixties.”

Barris only had 15 days and $15,000 to design the Batmobile, so he improvised by altering a customized Ford Futura experimental car that had previously appeared in It Started with a Kiss (1959), the motion picture starring Glenn Ford and Debbie Reynolds. 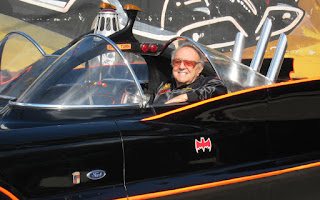 “I wanted to use the Futura because it already had the double bubbles,” Barris told Van Hise, referring the windshields. “All I had to do was remove part of the central section and keep the fore and aft. Then I put in the arches, lights, and everything else,” such as the Batphone, the emergency Bat turn lever, the Bat Ray laser beams, and the Bat-O-Meter (which located evildoers).

After the show got cancelled in 1968, Barris put the car on display at his business, Barris Kustom Industries, in North Hollywood, California. A reluctant seller even at age 87, Barris said that the Batmobile is “difficult to part with” and that he hopes the buyer has “as much fun with it as I did.”

Steve Davis, President of Barrett-Jackson, summed up the nostalgic appeal of the car nicely.

“There are only a few things in life that are able to capture the soul of an era, and the Batmobile by George Barris did exactly that,” he said. “There are the real fans that will strongly advocate, till this day, that coming home to watch the Batmobile soar out of the Batcave defines a lot of their first childhood memories.”

If you can’t cough up the considerable amount of cash to necessary to purchase the real , you could always check out Fiberglass Freaks (www.fiberglassfreaks.com), which offers an authorized replica for “only” $150,000.