Modern Home Technology - or, How to Ruin Classic Horror Movies 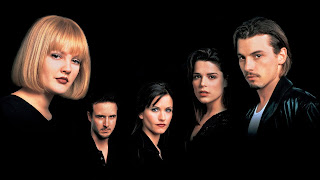 And now another guest blog from Spencer Blohm...

It's amazing what a difference a couple decades make. Whether out in the real world or in the world of film, technology has been evolving at the speed of light. Medical dramas, horror movies, thrillers and even romantic comedies have all been irrevocably changed by technology's rising tide. Horror movies are an especially fluid genre in this respect. They rely a great deal on keeping the protagonists vulnerable and isolated. However, who is really isolated in this world of instant solutions and constant interaction?

If the famous phone call in Scream had been made today, Drew Barrymore's character would have just traced the call, texted her parents about it and then put the killer on “call waiting” while she phoned the police. Problem solved, and in time for her to finish her popcorn. Likewise, in Funny Games all the main couple needed was a good security system and possibly a social media account and they would have been able to not only immediately call for help, but also identify the attackers in a few minutes flat.

Romantic comedies have been affected by the proliferation of technology as well. Hilarious cases of mistaken identity or an erroneously left voicemail that just must be erased before being listened to really couldn't happen today. The barely missed phone call - a classic trope - would just be followed up by a text message now. For example, imagine if Lucy in While You Were Sleeping had a social media account. Peter's family would have known within five minutes of checking it that they were not, in fact, even friends much less engaged. The film would have become about Lucy's attempt to heal her heart with her therapist, while dealing with the legal repercussions of stalking a stranger. For that matter, social media would have made a complete mess of the classic love triangle in Casablanca, with incriminating photos scattered left and right across the landscape.

Even classic kid's movies would be changed forever. Home Alone would have been Connected by Video Chat and the parents would have spotted the robbers trying to break in on the wifi-enabled security cameras that were installed in the yard and called the police before they even got through the door. It wouldn't be a comedy, it would be a PSA. No booby traps, no hijinks, no danger. It’s lucky we received all that and more, plus a bonus sequel because if it were made today, it wouldn’t be the classic Christmas movie we know today.

Of course, that's not to say some movies can't survive an update. The Ring relies on a spooky VHS tape, which could just as easily be a spooky DVD. Or even a haunted Youtube video that killed everyone who watched it. With millions of viewers on YouTube every day, it would be incredibly easy to spread this cursed viral video. Movies like You've Got Mail could be updated too, going from falling in love within a chat room to doing the same within an anonymous dating profile conversation. Though there would likely be some raunchy photos involved, as the internet has gotten a lot less pure than during its inception.

Instead of trying to imagine our favorite movies time traveling to the modern world, it may just be easier to preserve them as they are. There are plenty of new movies that haven't been made yet. Why not give future generations something new to make fun of? Because one thing is for certain - as bad as yesterday's technology looks on film today, today's technology will look far worse tomorrow.