I recently picked up two new Intellivision games from IntellivisionRevolution: Brickout and Copter Command. The former is a clone of Atari’s Breakout while the latter is a cleverly titled riff on Activision’s Chopper Command for the Atari 2600.

If you have an Intellivision Flashback or a copy of Intellivision Lives! for the DS, you’ve probably played Brickout, which was originally programmed in 1981 for Mattel by Rich O'Keefe of APh Technological Consulting. It was supposed to appear on the Triple Action cartridge (meaning that cartridge would have had a different name), but Mattel, fearing legal action from Atari, shelved the game. (Mattel shelved a Pong-like game called Hockey as well). 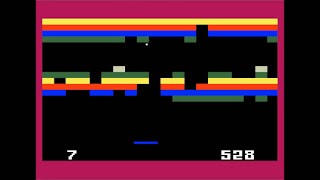 Now, thanks to IntellivisionRevolution, you can own a copy of Brickout for your Intellivision, complete with retro style box, manual, cartridge, and two keypad overlays. You guide a Pong-like paddle horizontally along the bottom of the screen, rebounding a ball into a wall of bricks near the top, and you should avoid missing the ball. When the ball hits a brick, it disappears, and when the ball breaks through the wall, it can ricochet off the top of the playfield and back into the wall. Your goal is, of course, to knock out all the bricks. As in the Progressive mode of Super Breakout, brick walls descend as you play.

Brickout is certainly a playable and even entertaining game, but it comes up lacking when compared to the obvious: Breakout and Super Breakout for the Atari 2600. Unlike those games, Brickout lacks the rotary control offered by Atari’s indispensable paddle controllers, meaning Brickout doesn’t have the speed or precision of control of the Atari games.

Many Breakout clones have incorporated a speed button to make the paddle go faster when desired, but, unfortunately, Brickout doesn’t add this feature. The back of the Brickout box calls it a “one player action game,” but the manual rightly says it’s for “1 or 2 players.” In two-player mode, the second gamer controls another paddle, and the two of you cooperate for a high score. There is no competitive option. The game has simplistic graphics and sounds and no music.

If you are a huge Intellivision fan and love to collect boxed games, then by all means grab a copy of Brickout. If you just want to play a brick-and-paddle game on a vintage console, stick to Super Breakout for the Atari 2600. It has more options and far superior controls. 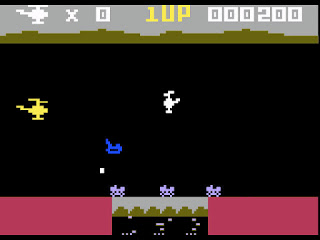 Unlike Brickout, which was programmed decades ago, Copter Command is an all-new creation. According to the back of the box, “You are the pilot of a helicopter gunship. Your mission is to provide cover during a counterattack deep into enemy territory. Watch your long-range scanner and destroy the enemy squadrons intent on eliminating your convoys of supply trucks, ambulances, tanks, and ships. You must act quickly or fail your mission!” 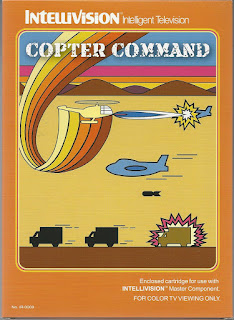 What this amounts to is a Defender-like, wraparound side-scroller in which you fire a steady stream of lasers at airborne enemies, which you can monitor on a radar at the bottom/center of the screen. Meanwhile, said airborne enemies fire bombs at vehicles that move along the ground to the left. After you destroy all the airborne enemies to complete a level, you get extra points for any remaining ground-based vehicles, which are “rescued convoy.”

There are two modes of play: Classic and Remixed. Classic mimics Chopper Command pretty well, though the gameplay is not quite as dynamic—it’s hard to capture that certain magic something that makes most Activision titles special. Even so, Copter Command is a fine, fast-action, rapid-fire shooter that any fan of the genre should enjoy. The game is a lot of fun, and the controls are surprisingly tight and accurate, which isn’t always the case with the quirkily designed Intellivision control discs.

Also unlike Brickout, Copter Command has lots of options, including the aforementioned Remixed mode, which offers additional themes. In addition to the standard Desert environment, the game cycles through Snow, Night, and Ocean, which is pretty darned cool. (This reminds me a little of Left Turn Only’s Space Patrol, a Moon Patrol clone for the Intellivision that lets you travel on different planets in addition to the moon.) Other options in Copter Command include two difficulty levels (Cadet and Commander), fast or slow fire, begin with 3-7 lives, autofire on or off, and invincible on or off.

Copter Command has larger, slightly blockier vehicles than Chopper Command, and it’s not as colorful—it’s missing the multi-color gradations found in the mountains/horizon at the top of the screen in the Activision game (again, more Activision magic). On the other hand, it has great title screen music, something you won’t hear in Chopper Command.

I love so-called homebrew games, and I think it’s awesome that programmers are creating new titles for the consoles I grew up playing. Anytime I receive a new game for the Atari 2600, ColecoVision, or, in this case, Intellivision, it’s Christmas in the early ’80s all over again.

Regarding the two titles in question, Brickout, with its bland controls and lack of options, may underwhelm all but the hardiest of Intellivision collectors, but Copter Command, an expanded take on an Atari 2600 favorite, will entertain most anyone with a healthy hankering for a hardcore shooter.

Thanks for posting this review. You confirmed my instincts when I was looking at buying a couple of homebrew titles. Copter Command looks fun to play, but it is hard for me to justify a Brickout purchase.

Thanks for the feedback, glad the review was helpful!

Great reviews. I've been eyeballing Copter Command for a while!