Asteroids Hyper 64 for the Nintendo 64 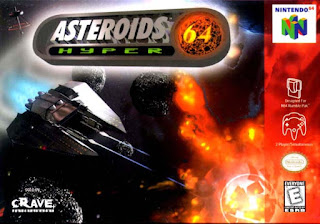 , the black and white Arcade classic from 1979, gets a 64-bit face lift with Asteroids Hyper 64,which gives you a choice of three ships, each able to fly in all directions and rated according to shield strength, firepower, thrust and rotation. You work for the Astro-Mining Corporation mining valuable ores, clearing areas of space for equipment, and providing transportation routes for members of the military and for civilians. In other words, you must fly around in (two-dimensional) space and blast everything in sight, including chunks of abandoned ships, fireball comets, enemy vessels, satellites and, of course, asteroids. When you hit a large asteroid, it breaks into smaller ones that must also be destroyed. 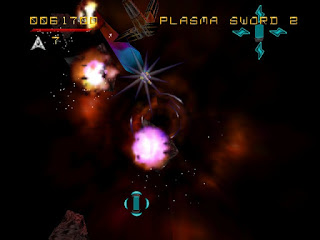 Along with your garden variety Classic Asteroids, which are nothing more than floating volcanic space rocks, this game also includes Mined Asteroids, Indestructible Asteroids, Crystal Asteroids, Ancient Egg Asteroids, Unstable Asteroids Radioactive Asteroids, Popcorn Ateroids, Cloaked Asteroids, and Alien Egg Asteroids that release deadly space worms when destroyed. Sixteen enemies include: Hunters, which home in on your ship and fire lasers; Kamikazes, which make high-speed suicide runs at your ship; and Standard Saucers, which fire bolts. A variety of wildcard weapons, such as mines and homing missiles, will help you turn the asteroids, enemies and other obstacles into space dust. Power-ups consist of shields, free ships and bonus points.

Up to four players can compete in the multi-player modes that include The Knockout Game, a battle to see who can get as many points as possible in order to stay in the lead, and the Color Clear Game, where players blast only those asteroids that match the color of their own ship. Only after destroying all of your own asteroids should you fire on other colors. Both multi-player games end when one ship remains. And somewhere, hidden within the six zones of play (consisting of more than 90 levels), is the original .

Back in the '70s, before videogames took over the Arcades, pinball (along with an occasional game of pool) was my favorite way to waste quarters. I enjoyed and had a good time with Breakout, but pinball was where I spent most of my time. When hit the scene in 1978, it posed a serious threat, but I still considered myself more of a pinball wizard than a videogame junkie. However, that all changed in 1979 with the release of Asteroids, the game that is most responsible for my misspent youth. If not for Asteroids, videogames might've been a passing fad in my life instead of a lifelong obsession. 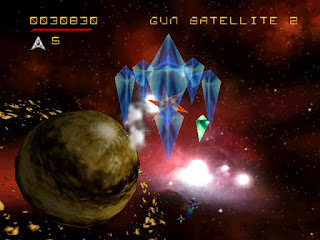 Twenty years after I played my first round of Asteroids, I can still enjoy the game via Arcade's Greatest Hits/The Atari Collection 1 for the PlayStation. Naturally, I was more than a little curious when I heard about Asteroids Hyper 64, an updated version of the beloved classic. Unlike Paperboy (also for the Nintendo 64), this is a retro-remake I truly had a good time with because it retains the flavor of the original game while adding all kinds of nifty features.

Over the years, I've blown away more asteroids than I care to think about, but still manages to make the experience new with all kinds of strange asteroids to blow away. Popcorn Asteroids are challenging and unusual because they get bigger and faster as you shoot them (up until a certain point). Radioactive Asteroids are somewhat like Kryptonite -- when you get too close to them, they zap your ship's powers in different ways, depending on what color they are. You'll enjoy blasting your way through the various asteroids and figuring out what strategies work best for each.

Another aspect that keeps the concept fresh (even for those tired of the original) is the notion of zones, each with a different playfield that effects the game. For example: each level of Zone 2 has a black hole that forces you not loiter in the center of the screen; and Zone 4 has an alien queen that cannot be killed, no matter how many times you shoot it. As you progress from zone to zone, you'll have a good time trying to keep the playfields and their assorted monsters and obstacles from destroying your ship.

However, the best thing about Asteroids Hyper 64 is that it keeps the basic control system of Asteroids intact. You can still spin, thrust, shoot, and warp into hyperspace smoothly and efficiently with the entire screen as your battlefield. In addition, the programmers included a number of cool special weapons, lots of enemy ships and a shield feature similar to that found in Asteroids Deluxe.

As expected, there is a replica of the original Asteroids game hidden somewhere in Asteroids Hyper 64. I won't give away the surprise of how you unlock it, but it is very easy to do. You'll find that it is not an Arcade-perfect conversion, but it is a serviceable replica that looks and feels about the same as the original game with the sound effects off. Overall, Asteroids Hyper 64 is a nice package that will please retro-gamers and next-generation gamers alike with its intense, challenging and, best of all, thumb-numbingly fun.

Check out Asteroids Hyper 64 on eBay .