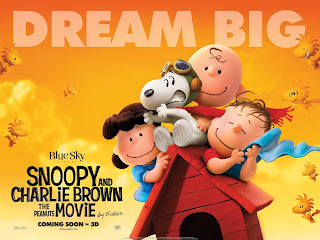 To coincide with the 65th anniversary of the Peanuts comic strip, 20th Century Fox is releasing The Peanuts Movie, a computer-animated film starring Charlie Brown, Snoopy, Woodstock, and the other beloved characters created by the late, great Charles Schulz, history’s first celebrity cartoonist. Born Nov. 26, 1922, Schulz died Feb. 12, 2000 (from complications due to colon cancer), leaving behind an incredible legacy enjoyed by hundreds of millions of people all over the world.

Prior to creating Peanuts, widely regarded as the world’s most popular comic strip, Shulz served in World War II as a staff sergeant with the 20th Armored Division in Europe. After being honorably discharged from the service in 1945, he returned to his hometown of Minneapolis and took a teaching job with his alma mater, the Art Instruction School. 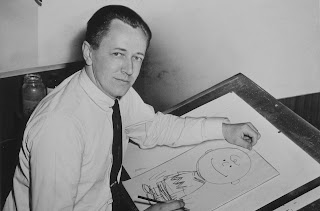 Schulz also worked for a Roman Catholic magazine called Topix (previously Timeless Topix), lettering comic strips that had already been drawn by other cartoonists. He was good at his job, as he explained to San Diego Comic-Con International co-founder Shel Dorf in Comics Interview #47 (1987): “I could letter very fast. I eventually would letter the entire comic magazine in English, French, and Spanish…for this [I earned] $1.50 an hour—I was just to submit my time—and I was always very efficient.”

To reward Schulz for his speed and efficiency, Roman Baltes, his boss at Topix, let the future multi-millionaire draw a four-page adventure strip and two editions of a strip called “Just Keep Laughing..”, which was a large single panel subdivided into four smaller one-panel gag cartoons. Schulz signed these early works “Sparky,” which was the nickname his uncle gave him when he was just a baby. Fittingly, the sobriquet, which Schulz maintained throughout his life, was inspired by the name of Barney Google’s horse, “Sparkplug.”

While honing his craft during the late 1940s, Charles “Sparky” Schulz sent samples of his work to comics markets across the country, selling 17 one-panel cartoons to The Saturday Evening Post and convincing the editors at the St. Paul Pioneer Press to publish his L’il Folks strip, which ran from June 1947 to January 1950.

Veteran editor Jim Freeman with United Feature Syndicate picked up L’il Folks, signed Schulz to a five-year contract, and suggested that the cartoonist alter the structure of the comic from a single-panel cartoon to the now-familiar four sequential panels, a comic strip format that would become the industry standard. Since Shulz had already been contemplating such a change, he gladly agreed.

Schulz was much less enthused by Freeman’s insistence that he change the name of the strip from L’il Folks to Peanuts (after the peanut gallery from the Howdy Doody TV show), which was enacted due to legal concerns regarding the fact that two other strips had similar names: “Little Folks” and “L’il Abner.” In a 1987 interview, Schulz said the name “Peanuts” is “totally ridiculous” and that it “has no meaning, is simply confusing, and has no dignity—and I think my humor has dignity.”

This admission by Shermy that he hated Charlie Brown was highly unusual for the day as kids in comic strips (and in literature in general) rarely expressed hatred for one another.

During the next two-and-a-half decades of Peanuts, which at its peak during the 1960s was published in 75 countries, in 21 different languages, and in 2,600 newspapers (reaching 355 million readers), Shulz introduced the robust, now-iconic kid cast, including: Violet (Feb. 1951), an uppity snob; Schroeder (May 1951), a Beethoven wannabe; Lucy (March 1952), a loud-mouthed bully; Linus (Sept. 1952), a smart, sensitive type who carries a security blanket; Pig-Pen (July 1954), who creates a cloud of dust when he walks; Sally (Aug. 1959), Charlie’s Linus-loving little sister; Frieda (March 1961), who is super proud of her naturally curly hair; “Peppermint” Patty (Aug.1966), a tomboy who loves “Chuck” (as she calls Charlie Brown); Woodstock (April 1967, named in 1970), Snoopy’s feathered friend; Franklin (July 1968), the strip’s first African-American character; Marcie (July 1971), “Peppermint” Patty’s bespectacled pal; and Rerun (March 1973), Linus and Lucy’s baby brother.
Snoopy, who was carried over from L’il Folks and is loosely based on a black-and-white dog named Spike that Schulz had as a teenager, made his first Peanuts appearance on Oct. 4, 1950, the third strip. Snoopy is, of course, Charlie Brown’s anthropomorphic beagle, who lives in the backyard, spending most of his time lying atop his doghouse, “speaking” in thought bubbles, hanging out with Woodstock, and living out a fantasy life as a famous author, an advice columnist, a college student named “Joe Cool,” and, most dramatically, a WWI flying ace, using his doghouse is an airplane.

A favorite among fans, Snoopy typically fails during his fantasies (he gets shot down by book publishers, and by the Red Baron), giving him something in common with Charlie Brown, who rarely succeeds at anything. Snoopy remains cool and confident for the most part (though he does get angry at times) while Charlie Brown struggles with self-doubt, self-loathing, and a general feeling of inadequacy. 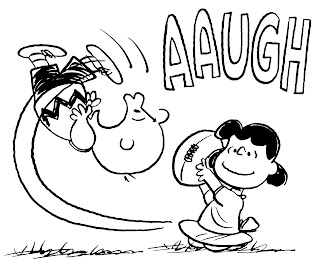 Despite his failures, Charlie Brown rarely gives up. He manages and pitches for a horrible baseball team, but keeps on playing. Lucy always pulls the football away at the last second, but he keeps trying to kick it. He can’t bring himself to speak to the little red-headed girl, but remains hopeful. In short, Charlie Brown is an “everyman,” beaten down, but not completely defeated by life, by friends, by a kite-eating tree, and even by his disrespectful dog, who frequently forgets his name, calling him “that round-headed kid.”

Schulz, who saw much of himself in Charlie Brown, named the character after one of his fellow students at the Art Instruction School. He based other characters on people he knew as well, including the little red-headed girl, who Charlie Brown talks about, but readers never actually see. During his time at the Art Instruction School, Shulz dated Donna Mae Johnson, a cute young red-head. Sadly, when Schulz proposed marriage, she turned him down, leaving the cartoonist heartbroken.

Many Peanuts fans relate to the characters in a personal way as well, including Mistee Clepper, a first grade school teacher at Keller Harvel Elementary near Fort Worth, Texas. “My favorite is Charlie Brown,” she said. “He resonates with so much of my spirit! He never gives up, but always seems to get the brunt of everything. People are mean to him, but he continues to do what he’s always done!”

Clepper, who “doesn’t ever remember a time when there wasn’t Peanuts” in her life, grew up watching the animated TV specials from a very young age, including the Emmy and Peabody Award-award winning A Charlie Brown Christmas (1965), which focuses on the “true meaning” of the holiday, and A Charlie Brown Thanksgiving (1973), which features a rather unconventional Thanksgiving feast.
Her favorite is It’s the Great Pumpkin, Charlie Brown (1966). “I have always loved Halloween, and the Peanuts special brings out the best of the holiday,” she said. “And no one ever wants a bagful of rocks, like Charlie Brown received! And his costume was the absolute worst!  A ghost with 20 eyes!”

As she got older, Clepper began “looking forward to reading the comic strip in the paper,” a habit she maintains to this day. “Peanuts reminds me of simpler times,” she said. “All of the characters remind us of what happens in real life. If you grew up watching the specials and reading the comic strip, it’s a great reminder of childhood.  Then we pass it down to our kids, which is why I feel like it’s so popular today.”

In Nov. of 1999, Charles Schulz, who wrote, drew, inked, and lettered every installment of Peanuts, even after he got famous, suffered several small strokes and found that he had a blocked aorta. His doctors discovered that he had colon cancer and that it had metastasized. Because of his poor health—in addition to the chemo making him sick, his eyesight was failing—Schulz announced his retirement on Dec. 14, 1999.

“I was so sad when Charles Schultz retired,” said Clepper, who decorates her classroom with Peanuts characters. “But it wasn’t the end of Peanuts!  They re-ran the strip and still do.”

Cute and simple, yet frequently profound, Peanuts does indeed live on in reprints, but the Shulz family agreed that the strip would never be written or drawn by any other creator (though the animated specials and merchandise are another story). In a 2000 issue of Priorities Magazine, Shulz said, “They came to me a long time ago and said no one should ever do Peanuts except me. I was somewhat surprised by how strongly they felt about their decision.”

Sadly, the Priorities Magazine interview turned out to be one of Schulz’ last as the disease that robbed him of his passion also took his life. He passed away Feb. 12, 2000 at his California home, surrounded by his loving family. The last new daily Peanuts strip appeared in papers Jan. 3, 2000 while the last new Sunday strip ran Feb. 13, 2000, just a day after its creator’s death. In total, Schulz had created 17,897 published Peanuts strips, an amazing total by an incredible talent.

In addition to reprinted strips and the new movie, Peanuts remains relevant in terms of mass market memorabilia, which fans, including Clepper, love to display in their homes, and, in some cases, on their bodies. “I collect anything and everything Peanuts,” she said. “I have about 25 different Peanuts shirts, from Christmas, Halloween, and just everyday attire as well. I also collect the plastic figurines that Target sells. When my son was born 11 years ago, they had a lot of them, ranging from Charlie Brown with his kite in the tree to Linus with his blanket. I also have the whole set of Great Pumpkin figurines.”

The first Peanuts merchandise was paperback book reprints of the strips, beginning in 1952. Comic books reprinting the strips began around the same time, with early issues commanding hundreds of dollars in near mint condition. In 1958, Hungerford marketed plastic toy figures based on Snoopy and the gang, and these are now worth anywhere from $50 to $300 each, depending on the condition and the rarity of the character.

At the Charles M. Schulz Museum & Research Center in Sonoma County, California, the town where the cartoonist lived and worked for forty years, visitors can view vintage Peanuts memorabilia, along with Schulz’ letters, photographs, personal items, and original strips.

Clepper would love to visit the museum someday (it’s on her bucket list), but for now she’s content to read the strips, collect the memorabilia, and venture down to her local theater to see The Peanuts Movie.

“The new movie is beyond exciting to me,” she said. “Even my first graders are pumped—we are planning on seeing it as a class. I think it will open up Peanuts to a whole new generation!”