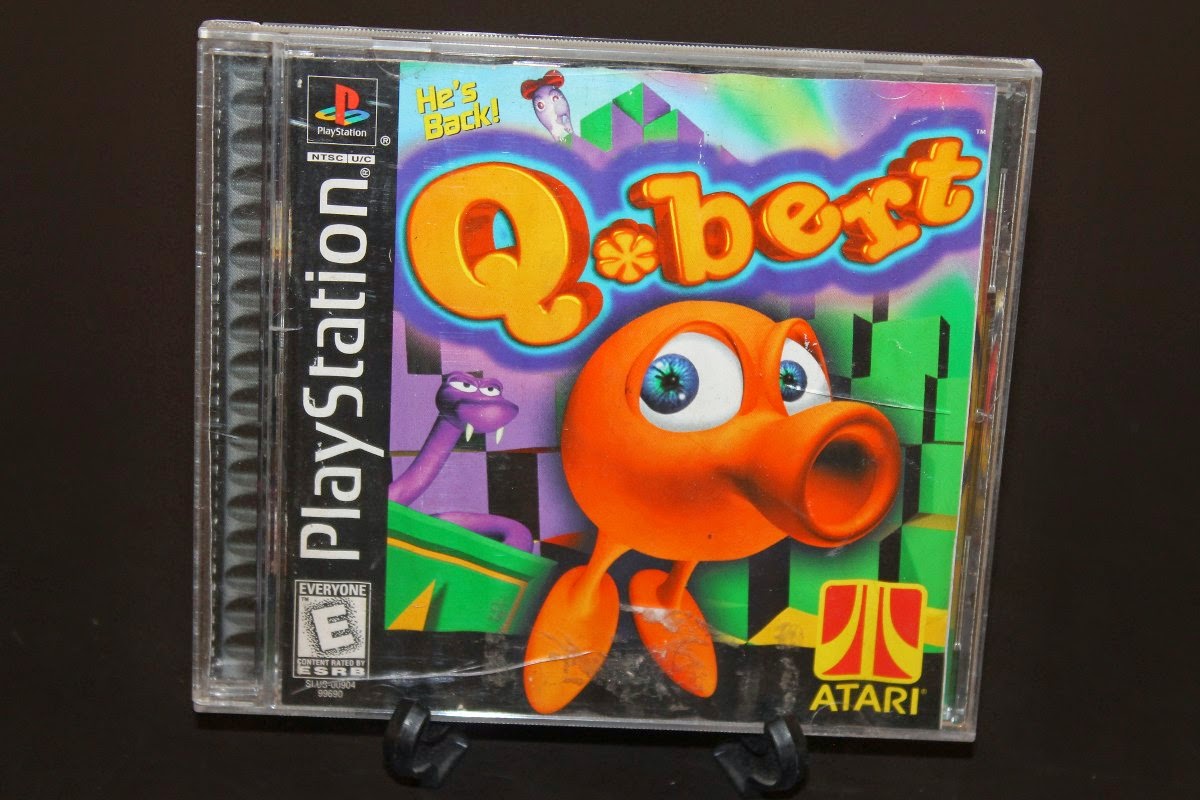 Hasbro Interactive continues their series of classic Arcade game remakes with Q*bert for the PlayStation. In this disc you'll find the original game, a new Adventure mode and a special Head-To-Head contest. Those of you who misspent your youths in the Arcades will recall that the original Q*bert stars a little round orange guy with bulging eyes, a round snout for a nose, short legs and no arms or torso. Your job is to hop Q*bert around a pyramid of cubes and change the colors of the cubes to a target color. In later rounds, you will need to change the colors of the cubes more than once in order to achieve your goal. Once the entire pyramid has been changed to the target color, you advance to a new pyramid.
While you are hopping Q*bert up and down the cubes of each pyramid, enemies, most of which are deadly to the touch, will try and stop your progress. Another way to die is to hop off of the pyramid without landing on one of the three discs that are placed above and beside the pyramid. These discs are useful when enemies, such as Coily the snake (Q*bert's archenemy), are in hot pursuit. Green enemies and objects can (and should be) be touched, and some of them cause trouble. For example, Slick and Sam wreak havoc by hopping on cubes and changing their color.

In the Adventure Game, Q*bert's home world and friends, including Q*dina (a female version of Q*bert), have been kidnapped by Coily the snake. You must brave four unique dimensions with six levels each in order to find four pieces of the Magic Disc. Once again, you must hop on cubes to change them to a target color (or colors), but this time the playfield varies in shape from level to level and there are lots of new enemies and features. You'll discover bonus rounds, secret levels and special cubes that score you bonus points or transport you to new locations. Also, power-ups, such as keys, smart bombs, speed boosters, torches and other useful items, will help you defeat enemies and complete levels. 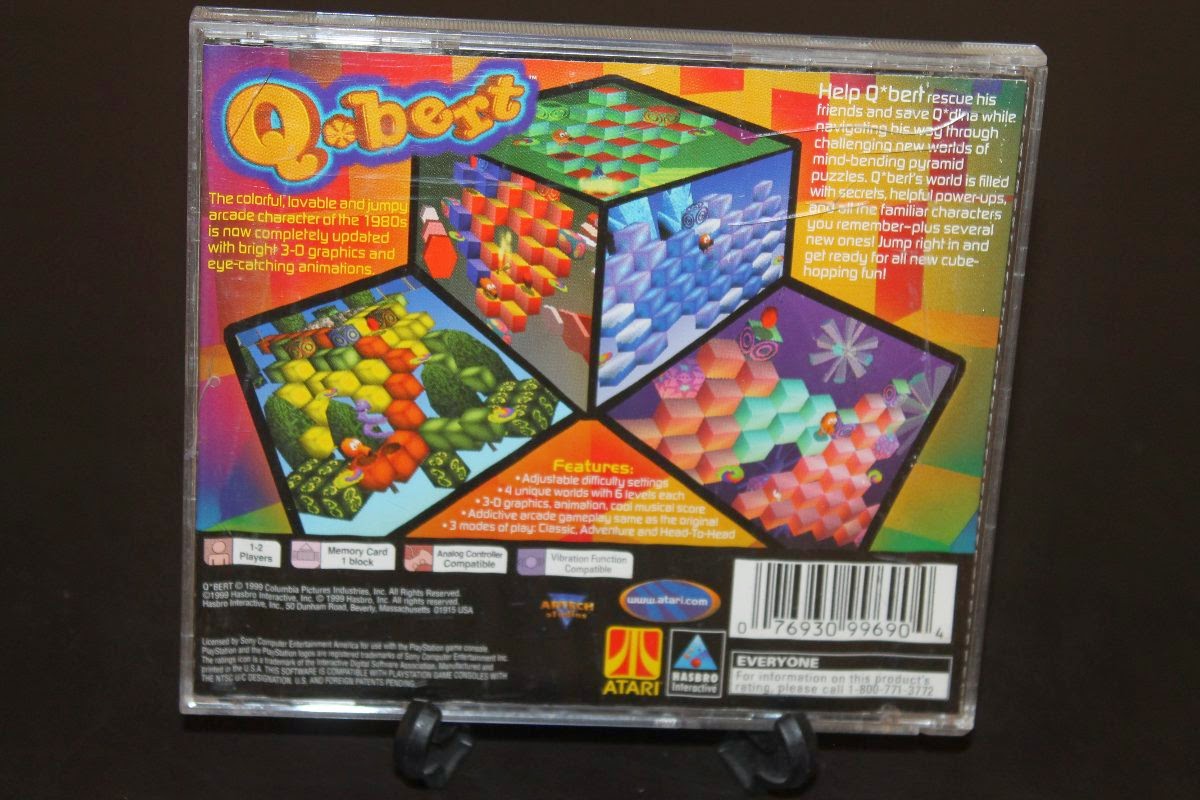 In the Head-To-Head competition, one player controls Q*bert and the other assumes the role of Q*dirk. Yes, once again, cube-hopping is the name of the game. Q*bert's cubes are orange, Q*dirk's are blue, and green cubes are shared. Players must complete their own color cubes while trying to grab as many green cubes as possible.

Q*bert for the PlayStation is exactly what an updated-for-the-'90s remake of a classic Arcade game should be. It includes a fantastic replica of the original game, a graphically enhanced version of the original game, an utterly mesmerizing Adventure mode and a highly competitive, endlessly enjoyable Head-to-Head mode. Q*bert has made a very smooth transition from all-time classic to PlayStation stalwart. Anyone doubting the validity of Hasbro Interactive's efforts in preserving and expanding upon videogame history should look no further than this disc.

Most anyone who haunted the Arcades in the early 1980s remembers Q*bert. It was a quirky game with unique controls, addictive gameplay, crisp graphics, bright colors and a humorous mascot ("%&@!&!!?#!"). It was a game boys and girls and men and women could enjoy. It was cute and easy to learn, yet challenging once you got past the first few screens. Q*bert for the PlayStation stays faithful to the original game, even in the Adventure and Head-to-Head modes of play. The basic goal of hopping on cubes is left firmly intact while new worlds, cool power-ups and strange camera angles add interesting elements of challenge to the familiar formula.


The variety of worlds in the Adventure mode is excellent. You'll travel through atmospheric lands both near and far that evoke a variety of moods and locations. You'll hop on gothic castles, towering skyscrapers, foreign villas and other cool structures and environments. Whimsical, art deco-style levels will dazzle your eyes with blinding color. There are all kinds of crazy designs and wacky cube arrangements;  fans tired of hopping on the same old pyramid will welcome the variety and constant change of pace.

The Head-to-Head mode adds a whole new dimension to the gameplay; sending Coily or another enemy to your opponent's side of the screen or thwarting your opponent by screwing with the camera angles is a lot of fun. Also, there are strategies involved. Should you try to be the first one to finish a level, or should you go strictly for points? How much should you concentrate on foiling your opponent's game plan? What about the bonus cubes?

There are only two complaints I have with Q*bert, but they are minor. The controls are solid, but they are not perfect. Occasionally, you will die and you will swear that it is the gamepad's fault and not your own. Also, in the Head-to-Head mode, the penalty for dying is not strong enough. You are given infinite lives and you get to return to the action immediately after you hop off of the playfield or get squashed by an enemy. I don't mind the infinite lives within the context of this particular game, but a few seconds should elapse before you are permitted to continue play.

With Q*bert for the PlayStation, generations of gamers can gather around the family television set and have a blast. If you have yet to jump on the retro-gaming bandwagon, now is the time.

OTHER VERSIONS OF Q*BERT: